Article and photos by Greg Havel

Several structural collapse incidents that did not involve structure fires have been in the news recently. The most recent of these occurred in Philadelphia, Pennsylvania, on June 5, 2013, at a building that was being demolished. Part of a four-story brick wall collapsed onto the single-story thrift store next door. Six were killed and 14 were injured in this incident. Most of these casualties were inside the thrift store when the wall collapsed onto its roof. One witness stated that a crane removed a beam from the front of the building when the wall began to sway and collapsed onto the adjacent one-story building.

We must remember that a building is a structural system. Each component is connected to other components and serves multiple functions. 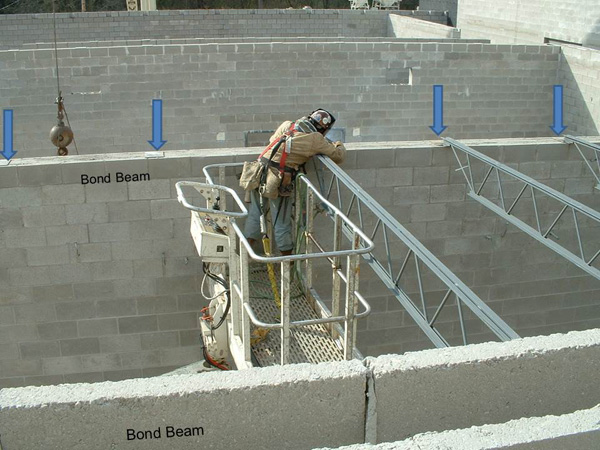 Photo 1 shows a non-combustible (Type II) building under construction. The steel bar joists are being set between the load-bearing masonry walls in the foreground and in the middle. The top course of concrete masonry units on the middle wall is a “bond beam”– blocks with a U-shaped cross section. This U-shaped cavity forms a continuous channel in the top of the wall which is filled with reinforcing steel and concrete grout to stiffen the top of the wall and provide for the installation of “setting plates” (at the arrows). These in turn are embedded in the concrete grout and the bar joists are welded to them. The top course on the wall in the foreground will also be a bond beam, after the installation of the reinforcing steel and concrete grout. The bar joists will connect and stabilize the walls; and the steel roof deck that will be welded to the bar joists will provide resistance to lateral and other forces that may be applied to the completed building. 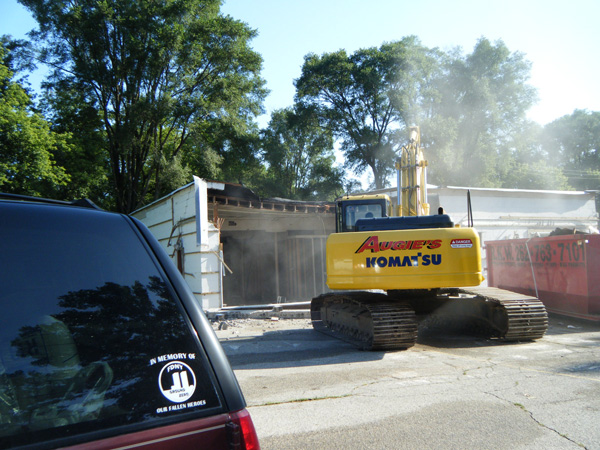 Photo 2 shows a single-story building under demolition. The lintel over the garage door has been removed, also removing the beam that supported the ends of the roof joists. These roof joists are sagging, exerting an inward force on the walls, attempting to pull them in. This is similar to what happened in Philadelphia, except that in Philadelphia, the beam that was removed destabilized a four-story wall that swayed and collapsed outward. In Photo 2, the collapse zone was marked, cleared of all by-standers, and spotters were assigned to keep spectators away.

When a building is demolished, its structural system is being destroyed as it is taken down. If this is not done systematically, and if connections are not broken at the proper place and time, the remaining parts of the building will be unstable and will be likely to do unexpected things. If sections of walls become unsupported or if sections of floors or roofs become cantilevers, these must be removed in small sections so that the direction of falling debris can be controlled.

Common connections between structural components include mortar, reinforcing steel, nails, screws, adhesives, rivets, bolts, welds, gusset plates, and joist hangers. Some of these connections are stronger than others, and the demolition should break components apart at the weaker connections to avoid inadvertently pulling down a large part of the structure in an uncontrolled manner.

Construction workers and building contractors are educated, serve apprenticeships in their trades, and are licensed to perform their work. Firefighters are educated, trained, and certified before working as firefighters and participate in a continuing education program. Demolition workers and contractors should also be required to be educated, serve apprenticeships, and be licensed by a state or municipality before performing this type of work.