Since 1960, the Ann Arbor, Michigan, Art Fair has evolved into one of the largest outdoor art fairs in the United States; its daily attendance is estimated at more than 100,000 visitors (photo 1). This number nearly doubles that of Ann Arbor’s resident population, which poses significant fire service operational challenges within a downtown district.

(1) Large events can dramatically increase the number of people in a city. (Photos by author.)

Many of the businesses located within the footprint of the Ann Arbor Art Fair state that their revenue during the event’s four days equals that of the winter months. Thus, the economic and political importance of ensuring the safety and success of this event is paramount for those who plan it. Planning for the Ann Arbor Art Fair is a year-round effort, which is a delicate balance among artist exhibition, visitor experience, and public safety.

The Rescue Squad and the Rock Band: Responding to Large Venue Show Incidents

Until 2018, each fair had its own booth numbering system. This lack of consistency posed emergency responder issues along with difficulties in directing visitors to specific booths. Ann Arbor police, fire, and emergency management collectively worked with the four art fair directors to develop a uniform numbering system.

Ann Arbor is also fortunate to have a robust group within its information technology unit that specializes in geographic information systems (GIS). Several iterations of uniform numbering systems were developed by the GIS unit; the final version used street abbreviations combined with the address block. For example, booth LI221 is in the 200 block of Liberty Street (photo 2). This system allows emergency responders to apply their institutional knowledge of city streets and address blocks when responding throughout the fair (Figure 1). 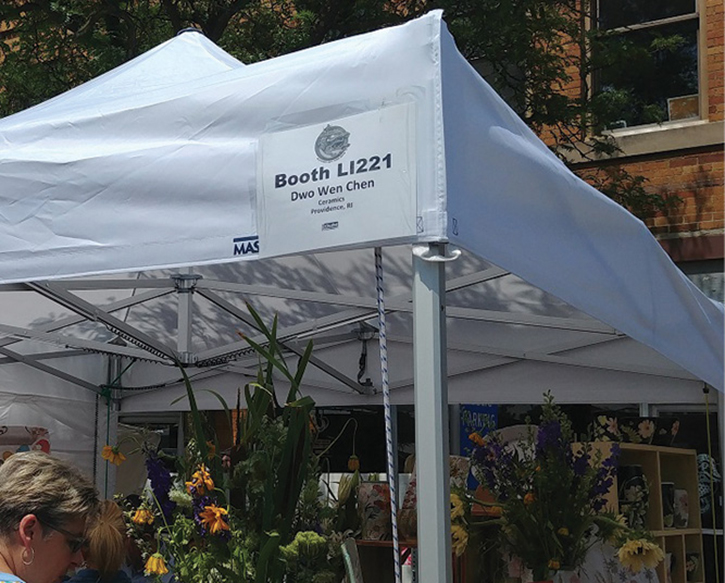 (2) Consider a uniform numbering system to guide responders and give visitors a point of reference when calling 911. 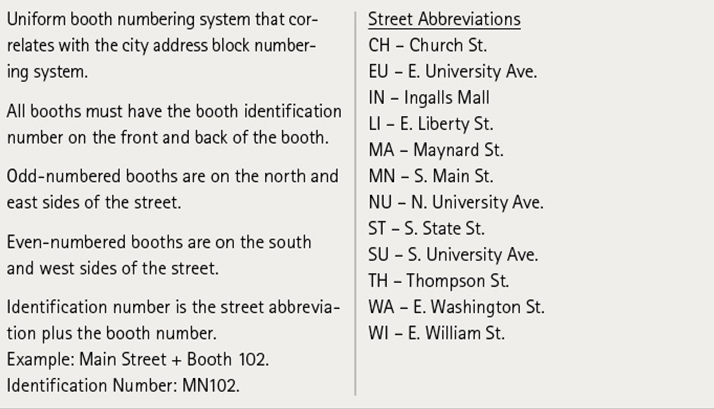 Maintaining fire apparatus access is of paramount importance when planning road closures for civic events. The authority having jurisdiction’s adopted fire code will determine the width of fire apparatus access lanes. The city of Ann Arbor has adopted the 2015 International Fire Code®, which maintains a fire apparatus access road of 20 feet. Items such as awnings, chairs, tables, art, sculptures, umbrellas, boxes, music stands, plants, bags, wagons, generators, light stands, lights, and cash registers cannot be allowed within this space. The city assigns fire inspectors to this event to be on active patrol to ensure that attendees adhere to fire access lane clearance and other fire and life safety measures. Along with fire access lanes, the event must maintain a minimum of three feet of circumferential clearance around fire hydrants to ensure access. Hydrant access is one of the more challenging enforcement activities because chairs, garbage tents, and vendor activities can encroach into this space.

Because of the concern of vehicle ramming attacks such as those that have occurred in Toronto, Canada, and Nice, France, Ann Arbor has had to reinforce road closures to lessen the threat during the Ann Arbor Art Fair. The same protective measures used to guard against a deliberate attack will also inhibit the response of emergency vehicles.

There are various types of barrier options (Figure 2). The Ann Arbor Police Department has taken the lead for determining barrier placement, since this is more of a law enforcement decision. However, the fire marshal reviews and approves all barrier placement.

Barrier type and layout are issues not only for fire apparatus access but also for emergency medical services (EMS). In the event of a mass casualty incident (MCI) requiring the transport of a significant number of patients, these barriers will be a hindrance for ingress and egress of transport units. This issue further promotes what has been experienced during numerous active assailant incidents, where most patients have been transported by modes outside of ambulances such as law enforcement vehicles and ride-sharing applications. Responders will not be in a position to stop these modes of transport—the best they can do is anticipate it. However, there are two major issues affecting patient outcomes with these alternative modes of patient transport. First, patients with minor injuries can overwhelm the closest trauma centers before critical patients arrive by EMS. Second, critical patients needing surgical intervention can end up at urgent care and other medical facilities ill-equipped to handle the severe acuity of these injuries. In both scenarios, you may need additional ambulances at these facilities to transport patients to more appropriate facilities.

In Ann Arbor, EMS transport is handled by a third-party provider. During the Ann Arbor Art Fair, this company staffs multiple bicycle teams and units on all-terrain vehicles (ATVs). The operational plan is that the bicycle teams will provide initial response and the ATVs will transport the patient to an intersection, where it will rendezvous with an advanced life support ambulance transport unit. Because of this increase in coverage by this EMS provider, the Ann Arbor Fire Department (AAFD) implements an altered response plan where fire resources do not respond to medical emergencies within the confines of the Ann Arbor Art Fair. 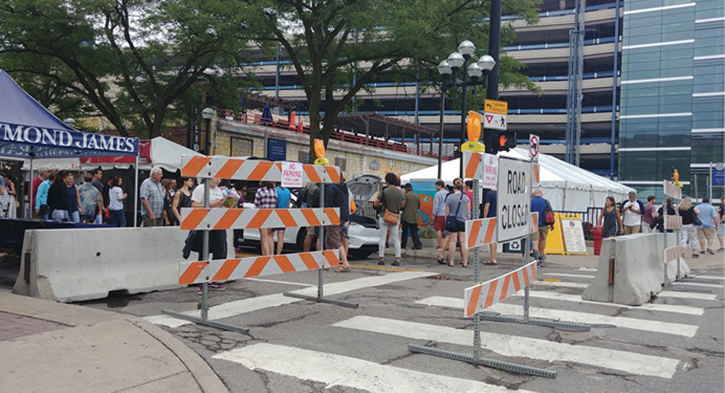 An emergency operations plan (EOP) is an important piece of the planning process to ensure emergency response agencies and event organizers have a framework off which to work. For the Ann Arbor Art Fair, the top hazards are weather related and include extreme heat, lightning, torrential rain, and severe wind. The EOP includes a weather briefing each morning from the National Weather Service. It is during this briefing that any expected weather hazards are discussed. If weather hazards are anticipated, follow-up briefings are scheduled. The EOP also discusses Ann Arbor’s authority to cancel the event should a weather or security threat arise.

Having a clearly defined process for event cancellation is a key provision in an EOP. Such a decision will have tremendous political consequences, so it is important that administrative and elected leadership agree on the process and mechanisms before you make such a decision. Local and state emergency management can be great resources to assist with writing the EOP. Training and exercises should also be done to vet the EOP.

Events in downtown districts are often signature gatherings for many communities. They are major economic engines and can be a substantial source of civic pride. Fire departments must establish communication with event planners early in the process to discuss fire department concerns and expectations. This is also a terrific opportunity to use the outstanding network of the fire service to reach out to fire departments in other communities to see how they have handled similar events. This can lead to a symbiotic exchange of ideas. Additionally, with the threat of active assailant and vehicle ramming attacks, the fire department’s desire for access can be at odds with law enforcement desires to restrict access. Again, early discussions and cooperation can lead to a safe event.

MICHAEL KENNEDY is a 25-year fire service veteran and chief of the Ann Arbor (MI) Fire Department. He is a CPSE chief fire officer, a Michigan Fire Fighters Training Council instructor II, and a Michigan State Police professional emergency manager. He has a bachelor’s degree in political science from the University of Michigan and a master’s degree in public administration from Eastern Michigan University.