On the afternoon of August 31, 2013, fire broke out at the roof level near the center of a nearly 300,000-square-foot food distribution warehouse in Delanco, New Jersey. The fire eventually destroyed nearly the entire fully sprinklered building, resulting in losses in the hundreds of millions of dollars. Solar panels, numbering more than 7,000, covered much of the structure’s roof. As of this writing, no official determination as to the cause of the fire has been released.

Photo 1. The Type II constructed warehouse appears to have included a mixture of tilt walls of concrete and metal clad solid polyurethane (in the refrigerated storage areas). These polyurethane wall panels fell as a unit, just as a concrete wall panel would. Their failure could prove deadly to any firefighter operating next to them. Fortunately, firefighters were kept well clear of the collapse zone. 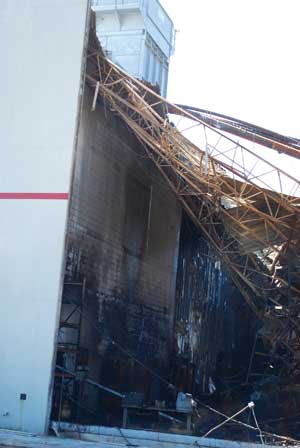 Photo 2. The only portion of the building to survive intact was the refrigeration plant along the D side of the building, adjacent to this concrete block wall. The fire containment benefits of this block wall, even though it did not include a parapet above the roof surface, are evident. 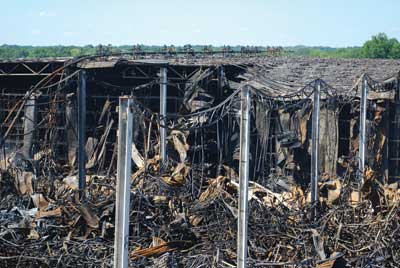 Photo 3. The loss of the entire warehouse area—despite its being fully sprinklered—is readily apparent in this photo. It is clear that the fire spread above the sprinkler heads inside the building, overwhelming the system. It is possible that flaming (likely liquefied) roofing materials dropped through seams and holes in the roof deck, igniting combustible stock inside the warehouse in numerous locations. 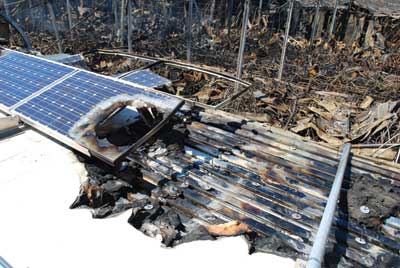 Photo 4. The roof appeared to be constructed of EPDM (“rubber roof”) over solid polyurethane on top of a metal deck. The combustibility of the composite roof and its location underneath the photovoltaic (PV) panel arrays created a significant fire spread problem, one in which the fire burned out of reach of the master streams. 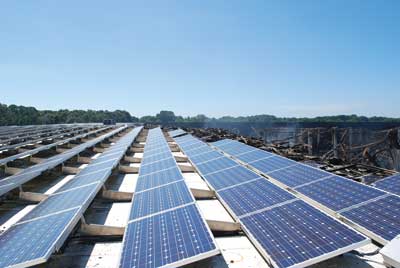 Photo 5. PV panels covered most of the roof’s surface, making it nearly impossible to get to the seat of the fire in its early stages. Given the roof’s size, hose streams could not even reach the fire area at the roof’s center. Close spacing of the panel arrays and the fact that they remained energized during this afternoon fire (recall that all PV panels are generating electricity during daylight hours) made a firefighting attack using handlines unsafe and nearly impossible.

GLENN P. CORBETT, PE, is the former assistant chief of the Waldwick (NJ) Fire Department, an associate professor of fire science at John Jay College of Criminal Justice, and a technical editor of Fire Engineering. He served on the Federal Advisory Committee of the National Construction Safety Team and is a member of the Fire Code Advisory Council for New Jersey. He is the coauthor of the late Francis L. Brannigan’s Building Construction for the Fire Service, 5th Edition; editor of Fire Engineering’s Handbook for Firefighter I and II; and an FDIC advisory board member. He is the recipient of the Tom Brennan Lifetime Achievement Award.