Article and photos by David DeStefano

Maintaining a sharp edge on firefighting skills and continued vigilance over situational awareness can be a daunting challenge for the modern firefighter. These days, we are charged with a multitude of missions and have fewer personnel with which to accomplish our goals. The basic unit within the fire service is the engine company. Certain tasks are assigned to and expected of an engine company, regardless of the jurisdiction it protects:

These are the primary firefighting missions for an engine company. At times, members of the engine may be asked to perform truck company functions such as search or overhaul, or even to assist in ventilation if necessary, but generally engine companies bring the water and apply it to the fire.

Maintaining effectiveness and proficiency in these operations may be difficult when much of the daily routine of the modern engine company is spent answering EMS calls. Training time may be spent on more specialized evolutions like hazardous materials, technical rescue support, and response to natural or man-made disasters.

Individual engine companies must take time from other activities to review and practice the various methods of achieving their core function that will be most suitable to their jurisdictions. They may include but are by no means limited to the following:

Of course, the relevance of this list will vary by jurisdiction. Many of the aforementioned items are tasks engine companies don’t routinely perform at most fires, but they may be very useful at certain incidents requiring efficient deployment and operation.

Depending on local policy, engine companies may primarily make forward lays into the fire scene. That doesn’t mean that circumstances won’t arise that necessitate a reverse lay to the water source. Pumping the hydrant may be a seldom used procedure with large-diameter hose, but for fires where the maximum flow from a hydrant is required, the engine company needs to know how to quickly set up to pump or change over a hydrant without loss of supply to the fireground.

Many fire departments, especially in urban areas where the water supply is sufficient, may seldom relay pump. However, this evolution must still be practiced and the procedure “kept under the helmet” for situations where it may be required. These may include fires in mill buildings or other huge occupancies that will tax any water system, requiring that mains at greater distances be tapped.  In cold weather climates, several hydrants in the vicinity of a fire may be frozen, requiring a very long water supply lay.

The opportunity to supplement a sprinkler or standpipe system may be a rare occurrence in some departments. In these cases, company officers should review department policy for these scenarios with driver/operators and the entire company. Understanding the role of the fire department pumper in conjunction with the stationary fire pump (if so equipped) is an important part of the driver/operator’s responsibilities when pumping the fire department connection. Also, reviewing local preference on the diameter of hose stretched from a standpipe as well as the type of nozzle employed will help ensure a successful operation.

Along with the role of the driver/operator in supplying the standpipe system, the firefighters on the attack line must be well-versed in making a standpipe stretch, including the amount of hose needed for typical occupancies in the district and how to efficiently use protected stairwells to mount their attack. 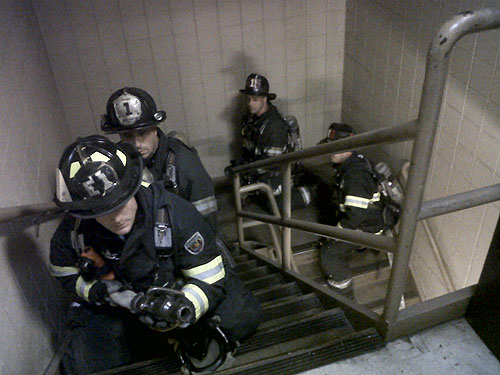 (1) Engine company members should routinely practice stretching up the various types of stairways found in their district.

Many engine companies protect districts with large numbers of buildings that are not standpipe protected and have many stretches that are well served by an outside stretch over a balcony, fire escape, or window. This simple operation will be quick and efficient only if the entire company understands the types of occupancies that favor this tactic, the equipment required, and the role of each company member. 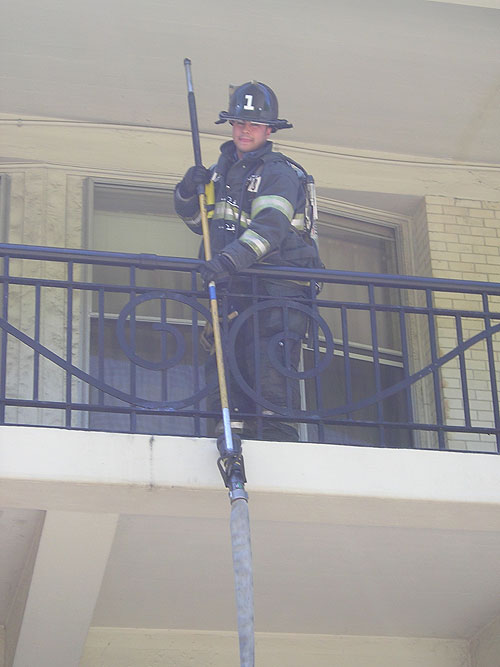 (2) Outside stretches may be performed using various means, but all operations require members to coordinate their actions and know their role.

With ease of use has come a great reliance on preconnected handlines to fill the needs of every incident. Although an engine company properly outfitted with preconnects to suit its most likely stretches is a great asset, there will come a time when that company will need to stretch beyond the preconnect. Practice using a three-inch supply line equipped with a gated wye for use in a long horizontal or vertical stretch will serve the engine company well in reaching a fire in a garden apartment or similar setting.

The purpose of any review and drill of tactical options is to ensure a smooth and efficient operation that will provide the optimal chance for a successful outcome. When engine companies practice the operations they may not encounter at every incident, they help ensure that each member will read from the same script and react properly, maintaining the sharp edge that makes a superior engine company justifiably proud.

David DeStefano is a 22-year veteran of the North Providence (RI) Fire Department, where he serves as a lieutenant in Ladder Co. 1. He previously served as a lieutenant in Engine 3 and was a firefighter in Ladder 1. He teaches a variety of topics for the Rhode Island Fire Academy. He can be reached at dmd2334@cox.net.

MORE ON THE LINE