Burn chambers offer a variety of firefighter training situations. You are limited only by your imagination. Here in Livonia, Michigan, we have the Swede Survival Systems Phase 4 and Phase 5 burn chambers. The Phase 4 burn chamber is often referred to as “the garage,” and that is exactly the scenario we set up on this training day.

Arriving crews were given the report that it is after hours; a “garage” appears to be closed for business, but smoke is issuing from the building. The scene was built by taking a vehicle that was written off, with its fluids drained, combustibles removed, and interior vacuumed out. The “front” of the business was an office with a desk, chairs, and some furniture. In the “garage bay” area, the car was parked and secured in place. A mannequin was set inside the chamber; the location was changed so crews would not be sure of the “victim’s location. 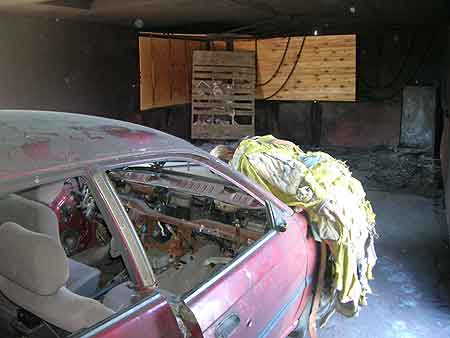 (1) Once crews have completed the rescue, the dummy can be put back in the chamber in any location, changing the scene for the next crew. 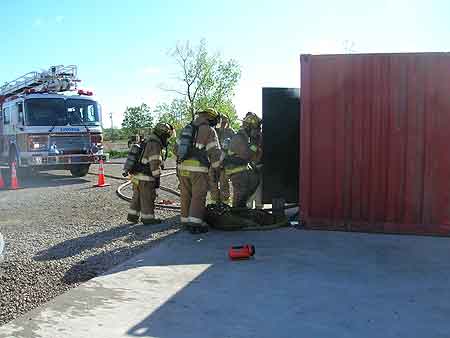 (2) Crews with full PPE and self-contained breathing apparatus prepare to enter the burn chamber to begin the evolution.

The garage was set up to have a live burn, to give firefighters some heat to contend with. A smoke machine was also set up and running so that visibility was zero. This is a realistic scenario for the drill for which we had set up. Crews would have to get into full protective equipment (PPE)–with a “time out” to make sure it was on correctly–prior to entry into the burn chamber. An inside instructor, equipped with a thermal imaging camera and a hoseline, was monitoring inside operations and crew safety. An attack line was stretched inside the burn chamber to the area of origin; the crew sent in to accomplish a primary search.

Our crews are pretty familiar with the burn chambers we have, so there weren’t too many surprises that can be thrown for which they aren’t ready. Advancing a hoseline into the fire area with the search going from the area near the fire outward, and back, was a good tactic for the search team. The crews were instructed not to extinguish the fire, which would have made the burns more difficult to conduct from thereon. Once the victim was located, the crew was informed that the search was positive. The entire crew worked together to free the victim and package him for removal from the building. Once outside, the primary search needs to be completed for the entire building–not stopping at one victim. In reality, another crew may pick up the search at the point of victim recovery. In this case, however, we sent the crew back in to finish the search it started.

Firefighters generally like to “do” training in this manner over classroom sessions. This allows them to use skills that aren’t used every day in my community in a challenging and different situation. Sometimes, drills are very explicit, with directions given before and during the drill. In this case, the information was kept to a minimum to give the crews a chance to think on their feet. This is the sort of situation many firefighters thrive in–keeping their cool when things are falling apart and making a solid action plan based on minimal information.