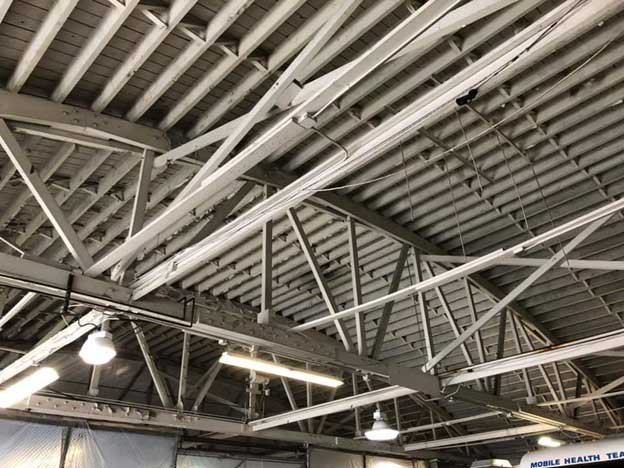 All images courtesy of author

Possibly one of the most dangerous positions on the fireground is the roof position. Roof firefighters encounter many different obstacles as they attempt to gain access to and work on roof systems of buildings under attack by fire. It takes a seasoned firefighter to recognize and analyze dangerous roof conditions. Just as firefighters operating inside of a burning structure are hard at work attempting to reach potential victims and prevent collapse via suppression, the roof teams are attempting to make the conditions inside tenable for these rescues while simultaneously racing the clock on a dangerous covered chimney, to say the least.

Bowstring truss roof systems gained headway during the mid-20th century. The ability to span long distances for spaces like bowling alleys, supermarkets, and auto body repair shops has been coveted to allow free movement within a building without the use of columns or load-bearing walls. In the fire service community, these structures have represented a significant danger; there have been several events that claimed the lives of multiple firefighters operating above or beneath them. Rightly so, fire service educators have identified the risks associated with bowstring truss roof systems. The message has been received and members have learned that operating times should be limited or withheld all together to avoid significant injury or death.

The bowstring truss, also known as the arched rib truss, uses similar components to other truss systems such as the use of a top chord, bottom chord, struts, and ties. (Figure 1).  Top chords are under compression, bottom chords are under tension, struts resist compressive forces, and ties resist tensile forces. There are some obvious differences, such as the curved or arched top chord, wider spacing between trusses, larger open spans (greater than 40 feet), dimensional joists used in conjunction with truss systems, and large masonry pilasters. Bowstring truss systems represent bridge-like architecture; they are architecturally beautiful and represent early ingenuity. They use wood or steel. When wood is used, you will often see large dimensional lumber, many times spliced together on the bottom chord with panel points using steel bolts and plates. (Figure 2).  This enables the long span. The steel bowstring can be constructed with various steel forms, such as angle iron or square tubular members. The dangers associated with the systems are often similar in failure but different in global failure rates. Bowstring truss roofs can often be masked by high parapets. The National Lightweight Construction Research Project (1992) reveals that bowstring construction in ordinary constructed buildings (Type III) does not classify as lightweight construction.

It is difficult to justify a long duration defensive firefighting operation inside a structure with a timber truss roof. Firefighters should anticipate early collapse of the roof and subsequent failure of one of the masonry walls. However, if the timber trusses are protected by fire-retarding materials, the collapse of the roof will occur more slowly, and the timber trusses are more likely to fail. It is important to note the collapse times of notable fires. The Waldbaum’s supermarket roof collapsed 32 minutes after units arrived, the Hackensack Ford dealership roof collapsed 35 minutes after units arrived, and a 2010 fire in a former commercial laundry facility collapsed approximately 16 minutes after dispatch. While collapse times can vary based on conditions, large bowstring truss roofs fail catastrophically due to their size and nature. Although 35 minutes can seem like a lot of time, think about how long into the operation this really is. This means that at 20 minutes, progress could not have been substantial enough to warrant continued roof operations, which is now the rule of thumb for many departments in operational progress. Smoke, heat and fire may be minimally detected early on because of the high ceilings, so firefighters may not see a significant risk when searching the interior; there may be a mild smoke condition, but a raging fire above.

When a bowstring truss system is attacked by fire, the connections are where we see early failure. Steel bolts and plates fail or become ineffective releasing the structural members. Because these truss systems are so widely spaced, when a bowstring truss releases, a large open span supporting the roof is dismantled, releasing wood joists above and causing a significant local collapse of that area. Bowstring trusses use cross ties and bracing because they are very unstable when not connected into a system. When the bracing and ties fail, it can cause a large truss to topple over laterally. The occupants also tend to use the truss loft within a truss as storage space, often loading up the bottom chord with excessive weight, which contributes to the unpredictable collapse nature, as seen in the Hackensack fire. It is important to note that heavy fire loads are often seen in buildings using bowstring truss construction. (Figure 3).  One of the pictures below shows tire storage directly beneath the bottom chord of a large (60 foot) bowstring truss. The heat generated by potential fire within this space would be astronomical and failure of this truss could be much quicker than others. This does not mean that if one truss fails every single one would, but even a local collapse could have a horrible outcome for firefighters working above.

Training for the Commercial Fireground

Improving Size-Up…One Letter at a Time

In buildings such as this we need to analyze risk vs. reward when it comes to committing firefighters to vertical operations. Will the operation benefit from firefighters cutting above, especially with a heavy fire load? Are interior operations with no other life hazard than the firefighters operating inside truly warranted? This should all be outlined in your standard operating procedures. If progress is not significant within a certain period of time, collapse should be expected.

Although this post focuses on large fires with collapse, it is up to members and incident commanders to determine the best course of action for fires using in bowstring roofs. Not every building will collapse and not every roof is dangerous. In no way should we advocate entirely omitting operations on these roofs, because there are cases where it is perfectly safe. Also, check out the NIOSH report F2010-38, July 6, 2011, which contains a summary of a firefighter fatality investigation due to collapse of a bowstring truss roof. 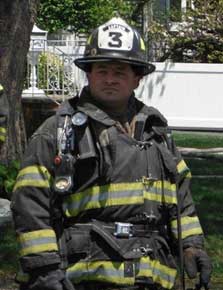 SALVATORE ANCONA is a deputy chief fire instructor at the Nassau County (NY) Fire Service Academy; a former captain and training officer for the Bellmore (NY) Fire Department; and a paramedic supervisor in Queens, New York. He has an A.S. degree in fire science from Nassau Community College and is in the emergency services administration undergraduate program at John Jay College of Criminal Justice. Ancona is the author of the building construction page “The Sons of Brannigan” on Facebook and was a recipient of the 2019 FDIC International Honeywell DuPont Scholarship.