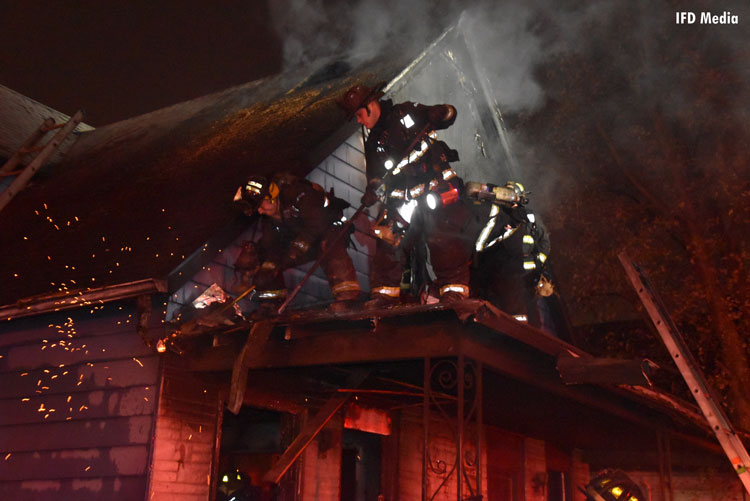 Photos and report by Rita Reith

Three firefighters were injured during a recent working fire at an abandoned double residence in Indianapolis, Indiana.

A third firefighter was on the first floor attack line and was hit in the head by a falling joist which knocked off his helmet, despite the secured chin strap and his SCBA face piece. A Mayday was established but rescinded after all three firefighters were quickly brought out of the structure by other crews. All three were transported to an area medical facility to be checked out for back, elbow, shoulder, neck and arm pain.

Indianapolis firefighters have battled 27 structure fires since November 1, 2017, 13 of which have been in vacant structures, including this one. Investigators continue to work on cause and origin for the fires, but state that neighbors are reporting activity happening in and around the vacant structures. This is the second time in less than a month that three firefighters have been injured while battling fire in a vacant structure. The structural integrity of these homes is often compromised because of lack of maintenance, vandalism, arson, or theft and presents a huge and significant safety issue for firefighters responding to the fire. Whether the cause is trespassing by squatters trying to keep warm, the crime of arson, or any other reason, making unauthorized entry into a structure is illegal and needs to be reported to police.

Podcast: Sons of the Flag: Joe and Heather Yowler

The Fire Service and Green Building Construction: An Overview