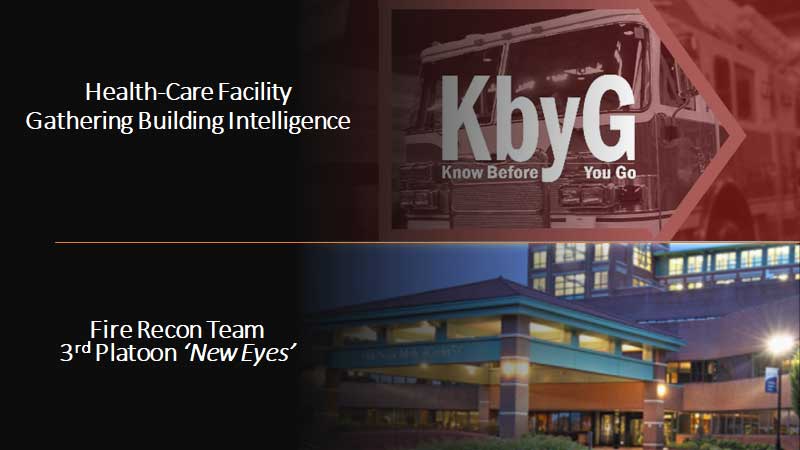 Why do firefighters and the incident commander (IC) need e-building intelligence, particularly in a hospital or any other occupancy? One major factor is that during an emergency incident, the fireground is a poor situation to make building decisions based on guesswork even as the incident unfolds.  When there’s a fire burning, it pays to “Know Before You Go” (KbyG).

Being proactive with regard to preincident information, the Teaneck (NJ) Fire Department conducted fire team recon (FRT) training session at the local health-care complex. These fire unit training sessions involved the four platoons participating in an overview of the hospital’s building systems, fire protection systems, in-patient areas, medical equipment, and various hazardous material locations. It also involved performing a platoon recon walk through of the facility and helped emphasize to all members the value of gathering building intelligence.

If These Walls Could Talk: eBuilding Intelligence

Below are some FRT survey items that were noted for firefighter safety and precautions.

During one recon survey, members discussed how quickly a fire team can pick up on what hospital wing they were entering. This discussion lead to an idea about posting above every fire-rated corridor barrier door a sign indicating what wing firefighters were about to enter (1). These fire-rated door barrier locations often signal that you are entering another hospital wing, an attached building, or a separate enclosed elevator lobby area. The wing notification was a wall-mounted directional sign, but they may be easily missed.  By posting directional signage (e.g. the “Auch Wing”) above the fire barrier doors will better assist both firefighters and police officers identify what hospital wing they are entering.

One of the many unique hospital equipment is a linear (linac) accelerator (LLA). This appliance is a microwave external beam radiation treatment that conforms to a patient tumor shape. This precise medical tool spares destroying any surrounding normal tissues. This radiotherapy treatment uses high-energy X-rays that destroy cancer cells in the area where it is directed. This LLA medical equipment is constructed within a shielded vault. This mega-shielded space may consist of massive density poured concrete walls or interlocking concrete modular blocks, interlocking lead bricks each weighing approximately 7.5 lbs. (2), a lead-lined drywall or plywood; and feature a lead shielded entrance door that may be 19 ½ in. (50cm) thick and weighing 22,046 lbs. (10,000kg) or greater.

Firefighters must be concerned about patient entrapment in the LLA room if both utility and emergency power supply is lost. During the surveys, each FRT team would stop and explore how to get a better understanding on how to get past this massive shielded entry door (3).  Firefighters were relieved to find that the two LLA rooms each had a different mechanism to control the door movements.

(3) This LLA room featured a massive door width that would slide pass the opening and in-house within a small, pocket corridor, non-shielded wall area. Knowing this pocket wall area exists would aid firefighters when it comes to breaching the wall as a potential slide (retracking) method to gain access into the LLA room.

In this facility, the pharmacy room contains a robotic encapsulated sterile environment chamber to fill in-patient medicines. This has an attendee arm sleeve capability to allow workers to reach into the chamber. This robotic chamber was powered by an air supply compressor that was not housed within the room. However, a wall mount chamber air supply mechanism (5A) was the chamber’s automatic compressor controlling device.

(5A) The automatic robotic air supply control was located on a nearby wall. While the manual air supply compressor (5B) was discover in the basement below this room. Noting where the two isolation methods were located would valuable to firefighters if a worker became entangled in the machinery.

During the survey, a firefighter asked where the robotic air supply compressor’s manual control system was located. The FRT team was shown the manual air compressor, located directly below in a basement MER room. In this case, the 3rd Platoon’s survey was able to cast “fresh eyes” on the situation and identify another potential firefighter safety concern.

Having the 3rd platoon’s “new eyes” proved to be an asset during the FRT team surveys.  It showed that it’s beneficial to rotate fire units for the same address. This enables firefighters with “new eyes” to observe something that a previous crew may have missed. During this hospital complex walk-through of the basement/MER space near robotic air compressor, the FRT Team noticed a full-sized door high up on the wall with a fixed ladder below the door saddle (6A). Upon further review, this fixed ladder door led into a narrow interior mechanical shaftway (6B) which then led to another fixed ladder onto a raised platform. A short platform distance away was the exterior exit discharge door, which led into a small out-of-the-way courtyard.

(6A) Although it bears an “Exit” sign, this fixed ladder doorway leads first into a narrow mechanical shaft (6B). Now envision a heavy smoke condition to locate another fixed ladder (platform) before the right of entry to an exterior exit door (top of photo). Second photo courtesy of Paul Kearns.

(7) Opening a fixed ladder door from the shaftway side, a recommendation was made to post a photo-luminescent sign indicating the building name, (e.g. Tracy Building – Basement MER Room Door Fixed Wall Ladder) to warn firefighters of the potential access hazard beyond the door.

Fire departments need to consider having fire units conduct annual time for building risk analysis familiarization. Any building intelligence gathered—especially firefighter safety hazards that are building specific, such as the hospital wing identification, unique medical equipment, and the fixed-ladder door concerns—need to be easily accessible from a department’s preincident electronic database, not only for current firefighters but also for future generations.

Having a department preincident “SMART” e-building intelligence solution available to firefighters in response mode better enables decision-based strategies and tactics to enhance our battle plans. Clearly fire companies have been empowered by enacted codes and standards to gather critical building information prior to an emergency. Our firefighters must make a commitment to a “KbyG Mentality” when it comes to making the fireground a safer place to operate.