On this training day, we were blessed with a bungalow home that was going to be torn down. Our housing department within the city had purchased the home from the bank as part of a foreclosure situation. The city will demolish the home, allow our high school vocational students to build a new home, and sell it. Of all the homes I had been given to train in over the years, this is by far the cleanest of the lot–not even a wrapper of the floor! When I asked my city contact about the clean home, he stated that the city council had to approve the purchase of several homes to tear down, and they requested a tour through one of the homes so they could get a feel for the plan. This explains why the home was clean and vacuumed prior to our arrival.

When you see a small home this clean, search and rescue training comes immediately to mind. I thought of all the homes in which I had to forgo interior operations because of the condition, and this was just the opposite. The home had a few challenges inside, as many homes do. The prior homeowner had made a bedroom out of the attic space and added stairs to replace the pull-down attic access that originally was there. This was a handyman job that didn’t involve permits, obviously. The stairs leading up were very narrow; they were concealed from the main floor by a closet bifold door, and the stairway was too narrow for a handrail. 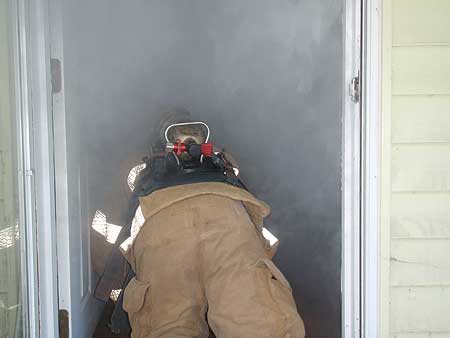 (1) Entering the structure on hands and knees, the crews are ready to begin the primary search.

Setup was minimal, since the house was so clean. The crews arrived one station at a time per drill session. We started with a talk about the 360° walk-around and what it can tell you about a house. In this case, it was obvious the house was on a crawl space (no basement) and had a dormer on top, indicating an upstairs room or rooms and an addition off the back of the home. It was obvious to all that the home was small.

The crew of four was told to conduct a primary search of the home. I suggested they break the task into two teams, with one going up and the other searching the main floor. A mannequin was placed inside for them to find, and it was switched from upstairs to the main floor in case crews compared notes. The crews were surprised at how confused you can get in a small house when there is no visibility.  We used a smoke-generating machine to obscure visibility, and the crews operated with full personal protective equipment and were on air.

After the upstairs and main floor searches were completed and the victim was found, the crews were briefed about their performance and what they can learn from the drill. At the end of the day, we added a positive-pressure ventilation (PPV) evolution to complete the session. I had the PPV fan set up at the front door and opened the back door to exhaust the pressure and smoke. We reviewed the basics and then talked about how to clear the main part of the house with the interior doors closed, then we opened them one by one. After just two minutes of PPV, the house was clear enough so we could walk through with the crews and show them what the layout of the house was like.

The entire training session lasted only about 30 minutes per station, with instructions and concluding remarks. Most firefighters like to practice the hands-on portions of the job, and this training session was no exception.