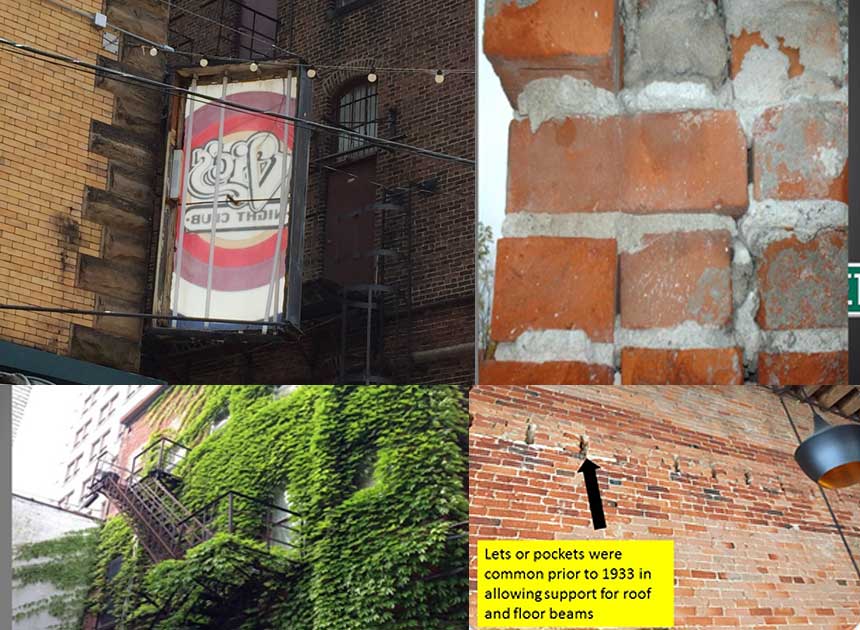 According to the National Fire Protection Agency (NFPA), in 2018 there were more than 1.3 million fires reported in the United States. I would venture to be that fire departments see many more fires in residential single-family dwellings as opposed to commercial structures. So how do we make up this familiarity deficit when it comes to handling fires in legacy structures of ordinary construction (Type III) or wood frame with a brick veneer (Type V)—your typical “Main Street” structures?

The size-up of these buildings is completely different. At 0300 hours on a Sunday morning you may not see everything you need to see in order to have a successful and safe outcome. Taking a cue from modern political discussions, I like to call these items “Main Street Optics.”

An all-encompassing list of these items would be impossible and unwieldy, so let’s focus on things an inexperienced firefighter might miss at the scene of such fires. You can perhaps use these “optics” as part of a checklist for your Main Street buildings, but you must get out and size up these buildings prior to your next Main Street fire.

The Dangers of Fire Escapes

Let’s focus on several exterior optics that again are specific to a legacy Main Street structure.

1. The Cornerstone/Year Built block inscription: I am a firefighter, not an architect, so I may not have the correct term for this block. At the top of many legacy structures near the center parapet, the individual who built the building or owned the block of these taxpayers would put the year the structure was erected.

Why is this important? Well, you can gain a ton of intelligence from the year the building was erected and if you remember one year (1933), you will have your first optic identified!

On March 10th of that year, a 6.4-magnitude earthquake measuring 6.4 hit the Los Angeles area. It caused millions of dollars’ worth of damage and killed more than 100 people. The damage to buildings, mostly confined to unreinforced masonry construction (URM), was extensive and led to changes in building construction materials. In turn, we as firefighters can use this to our advantage when sizing up Type III buildings.

The use of sand lime mortar to bond the masonry bricks together was the standard prior to 1933. This type of mortar does not bond as well to brick or stone as today’s Portland-cement mortar. Its largest issue is that the sand lime mortar can be washed and flaked away by years of weather, especially in terms of exposure to water, such as from leaking pipes or hose streams. As far as floor and roof beams are concerned, in buildings built prior to 1933, a firefighter can expect to find fire cut beams. These beams are supports cut on an angle so that, under fire conditions, they pull out of the wall, leaving it intact. This was a simple way to rebuild when an ordinary construction buildings surrendered to the effects of fire. Floor and roof supports prior to 1933 may also be set in small pockets in the bearing wall, called “lets”.

Parapet walls are also usually found on ordinary constructed buildings. Prior to 1933, these free-standing walls could be of varying heights. In fact many architects put their signature on buildings by designing very large parapets. Parapets were bonded by the sand lime mortar have a long history of killing firefighters. The more pre-fire intelligence you can obtain on them, the better, and the landmark year of 1933 is a starting point in gathering that intelligence.

A firefighter looking at a building built after 1933 will most likely find masonry bonded with cement, parapet walls no higher than 16 inches, and the use of steel rebar used as reinforcement. These buildings certainly pose a threat to firefighters but if the building’s birth year is known, a smart firefighter or officer can begin to size up his or her enemy under fire conditions. Many downtowns or Main Streets in the U.S.A. proudly display the year the buildings were constructed. Next time you see this, think about what you may or may not encounter because of the aforementioned 1933 earthquake.

For further study, consult the work of James Johnson, Vincent Dunn, Glenn Corbett, Chris Naum, Gregory Havel, and John Mittendorf, all of whom have sections on Fire Engineering and can provide a much more detailed look at vintage issues.

2.The “Kings Row” or Header Row: URM Type III buildings can be identified by the “kings’ row, which basically ties the rows or wythes together. A wood frame building with a brick veneer will most likely NOT have a King’s row. A quick look on an exterior wall may find these rows very quickly. Next time you are out in your district that has these Ordinary Type III, size up a wall and find the Kings row.

3. The Parapet Wall: A parapet wall is a free-standing wall extending above the roof line. As stated above, parapets prior to 1933 may have very high parapet walls. These walls are subject to a century’s worth of freeze/thaw cycles, poor craftsmanship, deteriorating bonding, and are extremely susceptible to early collapse. On a single-story building, the parapet wall will be held up by a large I-beam. When heated under fire conditions, this can twist and bring down the parapet wall in a large entire section.

See the above You Tube example from fires in Fall River, Massachusetts, and New York City. Not only is fire an enemy of the parapet wall, master streams hitting these unstable walls can bring them down. Parapet walls are not found every day in our firefighting jobs in residential dwellings, so they can be a forgotten headache on Main Street. When getting out into your areas, a great weekend training opportunity exists when you can spot your aerial apparatus on these buildings and get members on their roofs. Another great option incorporating today’s technology is the use of drones. If you have a drone club in your area or if your law enforcement agency has one, make friends and use them on your Main Street.

4. Canopies/Awnings and Signs: A hazard many young firefighters fail to recognize but one that must be considered, especially on the older Type III constructed building are signs.

Look at a newly constructed building and you will not see the same large, attention-grabbing signs as  you may see on your “Main Street” buildings built long ago. The front wall of these legacy Type III buildings may have several features that can pose a serious collapse threat to the unsuspecting firefighter.

A commander worth his or her salt must recognize these hazards during a fire, and it’s extremely important that we instruct younger members to recognize these as well. Below is a quick bulletin that can be easily understood by new members and a good review for us old guys. Get your crews out and zero in on the signs.

A marquee is a large metal structure attached over the entrance to a theatre or store. A marquee extends from the front wall out to the street and is used to display signs about the show or the store. The largest LODD event in the borough of the Bronx occurred April 4, 1956, when a furniture store marquee attached to a front wall collapsed during a fire, killing six New York City firefighters.

If a marquee collapses during a fire, it can pull the entire facade wall down with it. For example, if the beams behind the facade which support the marquee are destroyed by fire, the marquee can suddenly collapse downward, pulling the wall it passes through outward. Also, if the metal rods supporting the sign are heated, they can expand, pulling the sign from the wall. Remember, steel loses almost half its strength when heated to 1,000°.

A canopy is a cloth, wood or metal covering over a building entrance designed to protect people from the weather. Firefighters must also be wary after the fire is under control since canopies can fill with water during the firefight, making them into giant swimming pools poised to collapse. It was a canopy collapse caused one of the greatest tragedies in the history of the fire service, which occurred in a burning meat packing plant in Chicago in 1910. During the fire, a brick wall and a canopy attached to it collapsed. Twenty-one Chicago firefighters were crushed to death beneath the crumpled metal canopy and bricks.

5. Fire Escapes: An optic not found anywhere else but on legacy buildings, these life safety features are usually the last item unfortunately that receives attention and repairs. Sometimes these skeletal structures are barely attached to the building and there are several injury reports and well-known photos of these units failing under fire and rescue conditions. When out in your area, look at them, understand how the different types work, and, when training with your aerial on your Main Streets, take in the optics of fire escapes. Take photos and involve your building department when you see failure or potential trouble.

Get out into your response areas and while looking at your Type III buildings spend some time zeroing in on the front facades. If they have heavy signs hanging on them, look at the connections, or better yet place a ladder or your aerial up to get an even better view, take photos and share. During a fire, keep your members off the sidewalk, use the reach of your streams, and be pessimistic about the stability of the front walls. During long battles, remember the weight of the water from your master streams; during freezing weather ice can be just as bad as it forms on the building.

Firefighters today have so much to take in and remember. Situational awareness is paramount, but if you don’t know what to look for to begin with, you obviously won’t be aware .Size-up of Type III buildings is a lost art. Signs, marquees and canopies can be easily forgotten and the unsuspecting fireground commander may neglect these hazards. Be alert and recognize the signs of SIGNS on the fireground.

Signs can be a little rough after many years and their connectors can fail quickly from streams and fire. Author’s Photo

The human mind can only take in so much under stress. When it comes to your Main Street buildings, train your firefighters’ eyes for items not always seen and understand their hazards when fire strikes.

JOSEPH PRONESTI is a 29-year veteran of the Elyria (OH) Fire Department, where he is a shift commander. He is a graduate of the Ohio Fire Chiefs’ Executive Officer program and a lead instructor at the Cuyahoga (OH) County Community College Fire Academy. He is a contributor to fire service publications and sites, including Fire Engineering and firefighternation.com. He will be teaching “Main Street Fires 2020: Are You Ready?” at FDIC International 2020.

In Case You Missed It: March 2019 Firefighting Articles