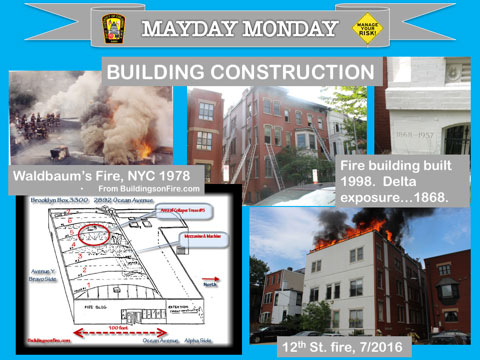 Happy Monday to everyone. August is almost over. We can’t get out of the month without remembering an historic August fire. On August 2, 1978, a fire in the Waldbaum’s Supermarket in New York City killed six firefighters and injured 34. The support structure of the bow-string truss roof became involved in fire and collapsed while several firefighters were working on the roof.  Here is an excerpt from an FDNY bulletin:

At 0839 hours, Brooklyn Box 3300 was transmitted by the Brooklyn Fire Dispatchers. It was a telephone alarm for a fire at the Waldbaum’s Supermarket on Ocean Avenue and Avenue Y.

On the roof, there were 24 members operating. Conditions on the roof were much more severe than they were inside the store. Heavy smoke and fire was showing near vent cowls and holes that were cut. The roof still felt strong. Suddenly, without warning, a section of the roof just folded in.

This was an eye-opener to the fire service and emphasized the need to understand building construction.  Another quote from the FDNY bulletin describes one of the critical lessons learned:

A recent fire illustrated the need for firefighters to hit the streets and find out about the construction of the buildings in their area.  The fire building was in an historic preservation area. It resembled other buildings in the neighborhood. An unknowing firefighter would think it was built in the same era and method as other buildings on the street.  The fire building was built in 1998 (the building next door 1868).  How can you know?  Get out and inspect and pass it on to the other shifts. Look for clues. This building presented with brick on the A, B and D sides, but the C-side was not. This can be a sign that the brick is a veneer and not structural.

This Monday’s task is to get out and look at a building in your area. Remember, the building is as much the enemy as the fire itself.  Now…hit the streets!!

Marking the Anniversary of the Fatal Waldbaum Super Market Fire

Reading A Building – The Bowstring Roof