By Kevin A. Gallagher

As the fire service races to catch up to advances in modern construction, especially “green construction” methods and materials, one issue has slipped through the cracks. As solar arrays begin to cover roof surfaces, structural insulated panels (SIPs)1 continue to replace traditional assemblies, and grass covered roofs2 are being mowed, the issue of vinyl siding distortion caused by reflected heat from high efficiency windows continues to fly under the radar.

The push for energy efficiency over the past several years has grown into a shove. The federal government has made residential energy efficiency a national priority. From a code development perspective, nothing gets the attention of state officials like changes to energy codes. Energy efficient windows are one of the top items of a green construction “must-have” list.

“The performance levels achieved by insulation windows are mandated by nearly all local building energy codes for both new construction and replacement in existing buildings. Windows are typically designed to meet the requirements of the International Energy Conservation Code (IECC), the most commonly adopted model energy code in the U.S. for residential buildings. To meet the IECC’s U-factor and solar heat gain coefficient requirements insulating double paned windows with low-emissivity (low-e) coatings3 are often used.”

In 2010, following the receipt of a complaint made by a resident of the city of Worcester, Massachusetts, the Board of Building Regulations and Standards, the state board that promulgates the Massachusetts State Building code, issued an advisory [Click HERE to view the advisory] stating in part that, “Under certain circumstances, vinyl siding, in the presence of window reflected sunlight, can distort, and in some instances significantly distort.”

The Massachusetts advisory contained a document titled “The Effect of Reflected Sunlight from Low-e and Other Double Paned Window Glass on Vinyl Siding,” prepared by the National Association of Home Builders (NAHB, February 2010). My friend and fellow fire instructor John Shafer posted the NHBA report5 on his Web site www.greenmaltese.com. In addition, the Vinyl Siding Institute (VIS) issued an advisory on solar reflection and heat distortion (Click HERE to view the advisory) in July 2010.

What is the problem, and why is this of concern to the fire service? Simply, energy efficient windows are designed primarily to deflect heat away from the window. When the pane on the outside buckles slightly, caused by differences in air pressure between the inside and outside environments, the result is a window primed to concentrate and divert sunlight in a manner similar to a magnifying glass. Those firefighters out there who fried bugs as a kid completely understand this concept!

There are enough variables in this equation to keep you confused (and to provide cover for the impacted industries) such as geographic region, building design, orientation of the structure, and the physical properties of the vinyl siding, just to name a few. When the angle of the sun is at the right height, and when wind and weather conditions permit, focused heat energy of significant levels can be reflected on a multitude of surfaces. When this concentrated heat strikes vinyl siding of certain characteristics (chemical make-up, thickness, and so on), significant distortion can occur.

I have reviewed the following photographs submitted by the homeowner from Worcester who has seen the vinyl siding of her three decker distorted by reflected sunlight from a neighbor’s windows. I’ve also seen firsthand the damage caused to a home in New Bedford, Massachusetts, which suffered through this phenomenon twice! After the first event, the owner replaced the siding. After the second, he gave up and now lives with one side of his home looking wrinkled (photos 2-4). 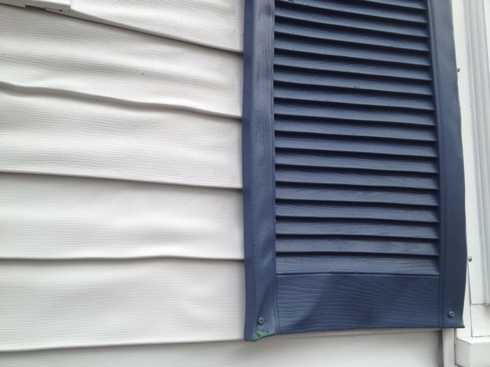 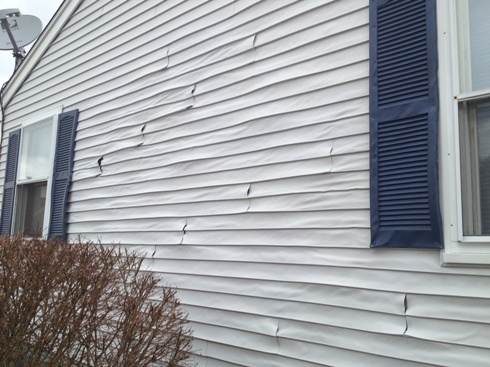 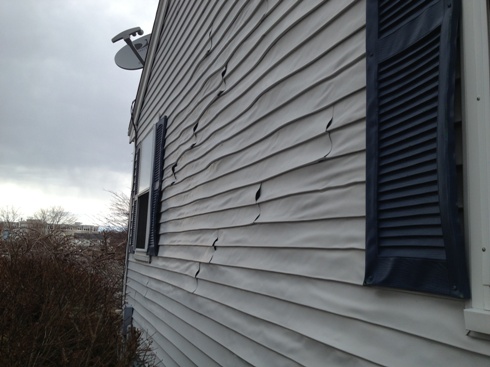 Internet searches of “vinyl siding distortion” amazed me on what those search engines produced. This phenomenon seems to be occurring across the country with many television reports and newspaper articles reporting on occurrences of vinyl siding distortion. Several of the video reports carry the same refrain from industry spokespeople; it is a limited event dependent on multiple factors, and the causes need to be mitigated and more research needs to be done.

Bottom line: Seeing is believing! I’ve seen and I believe! This is happening in our communities and should have us, as a fire prevention and protection community, concerned.

The professional spokespeople and the NAHB report tell us that it is possible for vinyl siding to reach temperatures in excess of 200°F when exposed to concentrated reflected sunlight from low-e windows. The VIS Institute reports that temperatures beginning around 160 to 165°F can soften vinyl siding of normal grade. One video clip6 that I viewed had the VIS spokeswoman stating that damage from reflected sunlight has been found to have damaged paint, trim, pool covers and car parts. It is refreshing to see that the industry folks who make both the vinyl siding and high efficiency windows are not running away from admitting the problem although I’m sure they differ as to the causes.

There does not appear to be a real concern about this concentrated heat energy at these levels igniting vinyl siding. The authors of the University of California report state, “The auto-ignition temperature of vinyl siding varies with the specific vinyl compound formulation and test conditions, but it is typically reported around 730 degrees F. For comparison, the auto-ignition temperature of wood, another common siding material, is typically reported in the temperature range of 400 to 500 degrees F.” Well, this seems like good news. However, the authors of the report strike this concern, stating, “Vinyl siding will shrink, char, and expose its backing material well before it reaches its auto-ignition temperature. Therefore, if any fire hazards from highly concentrated radiation need to be considered, the focus should be on materials surrounding and backing the vinyl siding, not the siding itself.”

So, auto-ignition is out, but a whole host of worries are in! My immediate concern is that if temperatures can hit in excess of 200°F, what happens when that concentrated heat energy is focused on mulch or other dried vegetation that sits at the base of the foundation? I have watched a two-story Colonial style home, wrapped in vinyl siding, be destroyed by a fire determined to have been caused by a cigarette placed in a dried out flower box several hours prior to the fire starting. What was the temperature of that smoldering compost? How does it compare to more than 200°F of concentrated heat on the same dried out flower box? If this phenomenon has been known to melt plastic parts on automobiles, what other damage can be caused by this focused heat source?

My gut tells me that there are stories out there of fires suspected or even possibly confirmed as having been started by the reflection of concentrated sunlight because of highly efficient windows. I’m not holding my breath for the National Fire Incident Reporting System to catch this. If you have had such an event, please e-mail me at chief@acushnetfire.com. I will share what is learned.

Kevin A. Gallagher has served with the Acushnet (MA) Fire & EMS Department since 1986, where he was appointed as chief in 2003. Gallagher has an associate degree in fire science and a bachelor’s degree in political science. He is an adjunct instructor in the Fire Science Program at Bristol Community College. Gallagher serves as the Fire Chiefs Association of Massachusetts representative to the Board of Building Regulations and Standards, the Massachusetts board responsible for overseeing the state’s building code. He has contributed articles to Fire Engineering and has taught several classes at FDIC on the issue of modular construction.