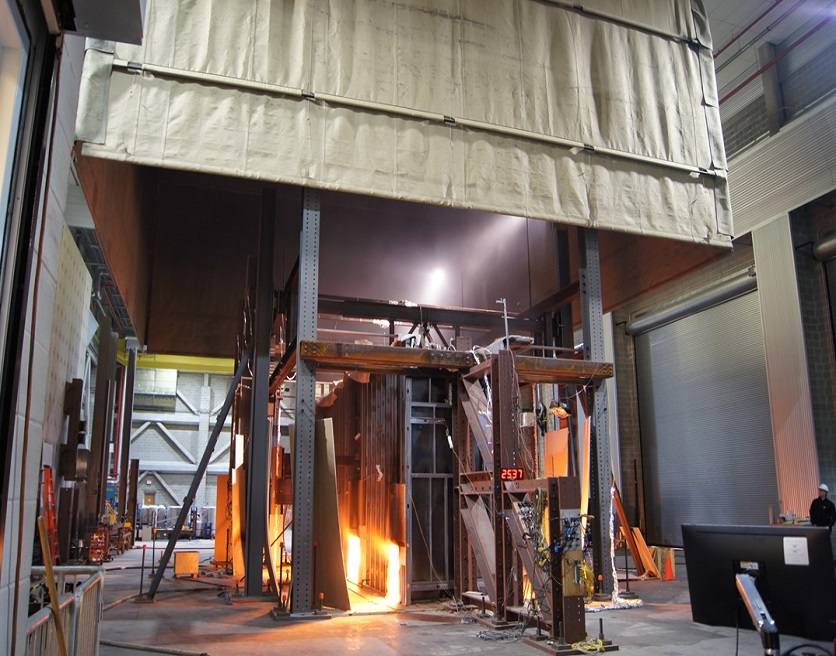 Engineers and technicians at the National Institute of Standards and Technology (NIST) spent months meticulously recreating the long concrete floors supported by steel beams commonly found in high-rise office buildings, only to deliberately set the structures ablaze, destroying them in a fraction of the time it took to build them.

These carefully planned experiments produced cracked concrete slabs and contorted steel beams, but from the rubble arose a wealth of new insights into how real-world structures behave and can eventually fail in uncontrolled building fires. The results of the study, reported in the Journal of Structural Engineering, indicate that structures built to code are not always equipped to survive the forces induced by extreme shifts in temperature, but the data gained here could help researchers develop and validate new design tools and building codes that bolster fire safety.

THE DANGERS OF LIGHTWEIGHT STEEL CONSTRUCTION

In the United States, fireproofing materials are sprayed or painted onto weight-bearing beams or columns to slow their temperature rise in case of a fire. These materials, which are typically the only fire-resistance measures integrated into the skeletons of buildings, are required by building codes to be thick enough to delay structural deterioration for a certain number of hours. The responsibility of putting fires out or preventing them from spreading, however, typically falls on measures outside of the structural design, such as sprinkler systems and local fire departments.

The current approach to fire safety is typically sufficient to protect most buildings from collapse; however, there are rare situations in which fire protection systems and firefighting efforts are not enough. In dire circumstances like these, where fires rage in an uncontrolled fashion, flames can sometimes burn so hot that they overwhelm the defense of the fireproofing and seal the structure’s fate.

Just like the red liquid in a thermometer rises on a hot day, components of a building will undergo thermal elongation at elevated temperatures. But whereas the liquid has room to expand, steel beams, like those used to hold up floors in office buildings, are typically bound at their ends to support columns, which typically stay cool and maintain their shape for longer because of additional fireproofing and the reinforcement of the surrounding structure. With very little wiggle room, beams that heat up during fires could press up against their uncompromising boundaries, potentially breaking their connections and causing floors to collapse.

USFA is Working on Details for Larger FY02 Assistance to Firefighters...