In October 2016, Chief Otto Drozd of the Orange County (FL) Fire and Rescue Department requested that the National Fire Protection Association (NFPA) develop a standard for preparedness and response to active shooters and hostile events. Drozd’s agency was among the emergency responders to the Pulse Nightclub attack of June 12, 2016. In such incidents, responders need to work in a unified manner, reduce terminology conflicts, and increase community preparedness.

The Route 91 concert attack in Las Vegas (October 1, 2017) was a stark reminder that these hostile assailant attacks are on the rise and will continue. Our communities must be prepared and our responders must be safe, organized, well-practiced, and unified in handling these incidents. A standard can’t be a “fix all”; a standard wouldn’t have stopped what happened in Las Vegas. However, the standard will enable all members of our response community to work together, making us safer, better prepared, and more resilient and able to decrease the loss of life and injuries.

The number of active shooter and other hostile events has been increasing throughout the United States and the world. The Federal Bureau of Investigation (FBI) reported in A Study of Active Shooter Incidents in the United States Between 2000 and 2013 that 160 events had occurred between 2000 and 2013 in 40 states, an annual average of 6.4 incidents between 2000 and 2006 and 16.4 per year between 2007 and 2013. According to this study, it does not encompass all mass killings or shootings in public places and, therefore, is limited in its scope. For example, the report excluded gang/drug violence shootings and other gun-related shootings that did not imperil the public (e.g., the accidental firearm discharge in a school building, a person who publicly commits suicide in a parking lot). The FBI reported 20 annual incidents on average for 2014 and 2015. 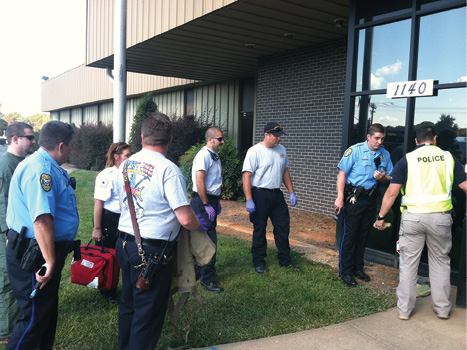 (1) Members of the Kernersville (NC) Fire Department, Kernersville Police Department, and Forsyth County Emergency Services prepare to enter a building during joint-agency, active-assailant rescue task force introductory training. The agencies were testing techniques, operations, and equipment for use during such an incident. (Photo by August Vernon.)

As a result, the NFPA solicited comments from the public and applications for potential Technical Committee members for three months and received more than 130 comments and 85 applications. In April 2017, the NFPA Standards Council named a committee and approved the development of NFPA 3000, Standard for Preparedness and Response to Active Shooter and/or Hostile Events. NFPA President Jim Pauley addressed this group at the first meeting on June 14, 2017, and noted that there were far too many of these incidents in recent years. Among those he cited were the incidents in London, Paris, San Bernardino, Boston, Sandy Hook, Fort Hood, Virginia Tech, and Charleston. “These tragedies highlight a need for first responders, emergency personnel, facility managers, hospital officials, and community members to have information when terror attacks occur,” he said. That day, two more active shooting incidents occurred in Virginia and San Francisco.

A commonality among all of these events and those that will follow is that the fire service, the police, the emergency medical services (EMS) and other public safety agencies will be responsible for providing an effective, coordinated response. This was highlighted at the emergency responses to the 1999 Columbine High School shooting, the Pulse Nightclub shooting, and now the Las Vegas attack.

Although much work has been put into developing recommendations, guides, and after-action reports surrounding the response to these events, no standard that outlined preplanning and emergency response expectations existed. Many after-action reports often cited a lack of unified cross-functional response as an area for enhancement. NFPA 3000 will help bridge these gaps and ensure that communities have the tools and resources that they need to be better prepared.

The NFPA 3000 standard’s Technical Committee is chaired by Richard Serino, of Harvard University. Previously, he was deputy administrator of the Federal Emergency Management Agency (FEMA) and chief of Boston EMS. The committee includes representatives from the federal departments of homeland security and justice; the FBI; and national fire, police, EMS, and medical organizations. Hospital officials, facility managers, private security authorities, and university personnel are also included.

In September 2017, the Technical Committee met in Orlando, Florida. to continue developing the draft for NFPA 3000. The committee reviewed various active shooter/hostile events, using a 30,000-foot perspective, to determine what communities absolutely need to properly prepare for and respond to, and eventually recover from, these events. The body formed task groups and developed more than 20 chapters that address different components of preparedness, response, and recovery. The committee focused on fostering interoperability using a common language, which enables responders to communicate clearly, enhance their safety, and resolve the incident in a unified and an effective manner. The document is not a tactical or strategy document since there is too much variation in these areas. Moreover, no one wants the perpetrators to know what our tactics are by standardizing them.

The NFPA 3000 development process allows all organizations involved in preplanning, communication, hostile response, and resiliency efforts to consult with experts who have been involved in prior active shooting incidents. One of the strengths of this committee is its experience. Participants discuss what worked and address what they wished they had known beforehand to better respond and mitigate the situation. Having individuals present who responded to recent incidents was beneficial. They indicated where the gaps are that could be filled and what they wish they had in place ahead of time.

The committee received a detailed, three-hour presentation on the attack at the Pulse Nightclub from fire department officers. They emphasized the need for NFPA 3000 at the command level. A cross-functional standard would have helped to ensure coordination with law enforcement and emergency management in their response.

It is important for EMS, fire, emergency management, healthcare, and law enforcement communities to come together and participate in developing NFPA 3000 so it can be the most effective standard possible. The public and first responders are encouraged to provide comments when the draft is posted and are invited to follow the development of NFPA 3000 by requesting to receive updates by choosing that option on the document page. To learn more, go to www.nfpa.org/3000.

United States Department of Justice, Federal Bureau of Investigation. (2014) A Study of Active Shooter Incidents in the United States Between 2000 and 2013. file:///C:/Users/robertm/Downloads/(U)_ActiveShooter021317_17B_WEB.PDF.

JOHN MONTES is an emergency services specialist and the staff liaison to the technical committees for the active shooter response standard programs, fire service training, emergency medical service (EMS), and fire service occupational safety and health at the National Fire Protection Association. He is a nationally registered EMT and served as an EMS specialist/EMS duty chief for the County of Santa Clara (CA) EMS Agency. He is the NFPA representative to the Joint National EMS Leadership Forum, National EMS Advisory Council, and the Road to Zero Coalition.

Drill of the Week: Knots