London is England’s capital, one of Europe’s financial centers, and home to more than 8.67 million people who live in Greater London (the city itself). What is known a Metro London has a population exceeding 13.8 million. London is one of the world’s leading tourism destinations.

The city has 32 administrative districts or boroughs. One of these—Kensington and Chelsea—is one of the city’s most exclusive residential areas. However, it also has a significant working class population, many of whom live in rental apartment blocks. One of these working class blocks, the Grenfell Tower, has become world famous as the city’s most important loss-of-life fire since World War II.

The London Fire Brigade (LFB) is a fully professional municipal fire service with a total of nearly 6,000 personnel, of which just under 5,100 are operational firefighters and officers. LFB operates out of 102 stations plus a maritime station, with 157 engines, 22 aerial devices, one fireboat, with 30 more engines and aerials in reserve.

On the morning of June 14, 2017, the LFB received the first call, informing them of a significant fire in the Grenfell Tower. The first response team of two engines and one aerial device arrived at 0100 hours, just six minutes after the call. Because of the exceedingly rapid growth of the fire, the senior officer immediately requested reinforcements. At the height of the incident, some 250 firefighters and officers and 45 vehicles (engines, aerials and miscellaneous support vehicles) were at the scene. Again, because of the magnitude and intensity of the fire, all firefighting evolved around applying water to the exterior of the building, It was only after several hours of this defensive attack that firefighters were able to enter the building and begin search operations to find victims.

According to initial investigations, the Grenfell Tower fire was caused by a faulty refrigerator/freezer in an apartment on the fourth floor. The fire spread upward, both inside and along the exterior façade, with remarkable speed. Many survivors stated that they heard no alarms, but were awakended by the shouts and screams of other residents. Some others, however, commented that they did hear some kind of fire alarm.

As the fire spread, many of the victims on the upper floors became trapped; the only open staircase was filled with smoke and the ascending fire.

One week after the fire, the number of casualties was officially set at 79, although apparently there might be more; several persons were still unaccounted for. Firefighters rescued 65 persons from within the burning building [Figure 1 (click to enlarge)]. 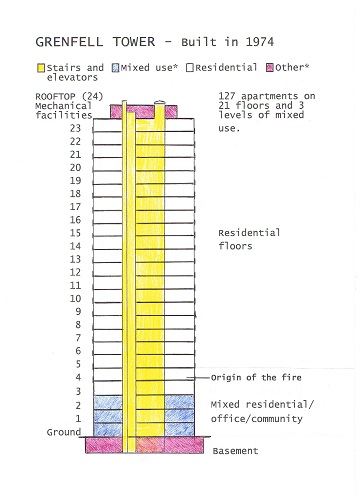 As of the last week of June, several investigations were underway. These included the origin of the fire, possible (and probable) violations of building codes and standards, possible fraud by contractors and/or building material suppliers, and studies regarding the probabilities that automatic sprinklers could have held the fire and limited its propagation [Figure 2 (click to enlarge)]..

The manufacturer of the refrigerator/freezer—Hotpoint—has published requests to owners of this particular model to contact the company’s customer service department in view of possible revisions and repairs. 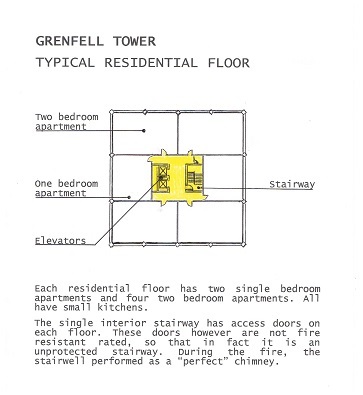 The most singular aspect of this tragedy lies in the materials used in the exterior cladding of the building [Figure 3 (click to enlarge)]. This material, known as Reynoboard PE, has been known for years to be very combustible. In several countries, it cannot be used on buildings higher than 100 feet, and in the United States it can be used only up to 40 feet. A different material, Reynobord FR, is supposedly to be used on taller buildings. According to initial investigations, the contractor that stipulated using the combustible cladding instead of the fire resistant one may have “saved” more than $120,000. 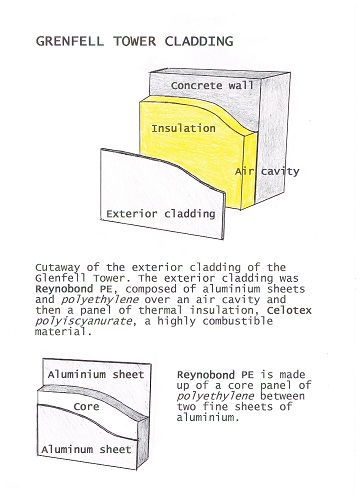 Several days after the fire, some 4,000 residents from at least a dozen similar buildings were evacuated from their homes so the claddings of these buildings could be revised and removed.

The British government has come under severe criticism regarding lax and permissive building codes and, even more critical, a series of modifications and deregulations in areas of building fire safety as well as several budget reductions. Apparently a major fire safety study in high-rise buildings had been projected for this year, but it was shelved. Also, current British building codes do not require sprinklers for buildings similar to the Grenfell Tower.

The aftermath of this tragedy will be far-reaching. The present British government, already weakened as a result of the national elections the previous week [and with “Brexit” (England’s retirement from the European Union)] have the government treading a very narrow path. It remains to be seen just how seriously the investigations will be made and, most important, what remedial actions will be taken.

The Grenfell Tower fire now forms part of a long list of tragic high-rise fires that have occurred around the world. In this century, six major high-rise fires have taken nearly 3,000 lives (including 9/11, which took 2,312 victims).

Please stayed tuned for Part 2 of this series.

George H. Potter is a practicing fire protection specialist who has lived in Spain for the past 47 years. He served as an Anne Arundel County (MD) volunteer firefighter with the Riva Volunteer Fire Department and the Independent Hose Company in Annapolis and as an ambulance driver with the Wheaton (MD) Rescue Squad. He served six years in the United States Air Force as a firefighter, an apparatus driver/operator, and a crew chief. He has been involved in fire protection system installation, mobile fire apparatus design, and construction and fire safety training. He is a Spain-certified fire service instructor and a hazmat specialist, and is a member of the Board of Governors of the Spanish Firefighters’ Association (ASELF).