We are midway through 2017, and 10 massive lightweight wood “toothpick construction” (LLW/TPC) that were in various stages of construction burned—many of them to the ground—causing numerous existing building exposure fires that displaced many families.

Although the code development cycle is currently reviewing Chapter 33—Fire Safety Under Construction and Demolition proposals for the 2021 edition to address LLW/TPS under-construction concerns, there is still a need to address code sections for the ineffective National Fire Protection Association (NFPA)-13R (roulette) sprinkler system and amend it with a full NFPA-13 building sprinkler system as well as seek smaller footprints and height limitations with masonry walls from the foundation through the roof. In the existing building code, the LLW/TPS buildings seek a retrofit proposal to enhance current code sections on fire protection and life safety measures.

After the Boston 6th-alarm building under construction fire, “The city commissioner blasted construction workers for taking 90 minutes to report a fire that destroyed a six-story building in Dorchester last month and said city officials are working on new safety standards for buildings under construction, particularly those with highly flammable wood frames.”1

Table 1. Fires in Buildings Under Construction

In today’s LLW/TPC construction fires (under construction and existing structures) the only surviving building components are the parking garage area, elevator hoistways, and stairwell enclosures. 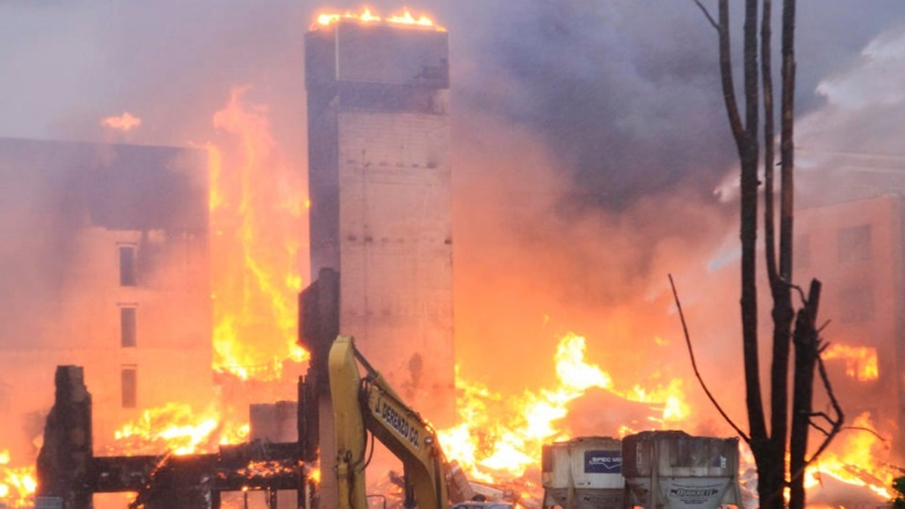 Some proactive actions a local fire department should advocate to its community for LLW/TPC buildings under construction include the following:

– Submit a site safety plan (to be approved by authority having jurisdiction).

>  No smoking or cooking on the premises.

>  Have a hot work policy in place and fire guard for cutting welding, grinding operations, and so on.

> Use of a fire extinguisher.

> No smoking or cooking policies.

> How to report a smell of smoke or a fire.

> Hot work procedures, and so on.

o   Post a patrolled 24-hour fire watch with the means to report a fire incident.

o   Municipality to consider having the owner float a “conflagration fire bond” to cover the cost of all fire suppression and law       enforcement operations.

Legislation prompted by the January 15, 2015, Edgewater, New Jersey, fire was stalled by trade group lobbying.3 With all of these LLW/TPC fires continually burning while under construction and occupied, trade groups are still lobbying at the state level and stalling legislation to go forward to enhance fire protection and life safety measures. (see http://www.northjersey.com/story/news/new-jersey/2017/07/28/legislation-prompted-edgewater-fire-stalls-prieto-meets-lobbyists/517028001.)

State and local fire organizations should challenge these trade groups and building owners with the videos of all these fires and refer to the 1995 Chesterfield, Virginia, fire. The United States Fire Association’s Technical Report Series on the Old Buckingham Station4 incident found key issues with the following:

Do we really need to wait for the next code cycle edition in 2021? The time is NOW for the trade industry to step up and take action to reduce fires at buildings under construction and enhance life safety measures by promoting an NFPA-13 full-building sprinkler system, smaller building footprints, height limitations, and masonry walls from the foundation to the roof for future occupants.

JACK J. MURPHY, MA, is a fire marshal (ret.) and a former deputy chief. He is the chairman of the New York City High-Rise Fire Safety Directors Association and a member of the National Fire Protection Association (NFPA) High-Rise Building Safety Advisory and the NFPA 1620, Pre-Incident Planning, committees. He has published articles and authored RICS: Rapid Incident Command System Field Handbook and the Preincident Planning chapter of Fire Engineering’s Handbook for Firefighter I and II and coauthored Bridging the Gap: Fire Safety and Green Buildings. He contributes articles to Fire Engineering and is a member of the Pennwell Fire Group executive advisory board. He was the recipient of the 2012 Fire Engineering Tom Brennan Lifetime Achievement Award.