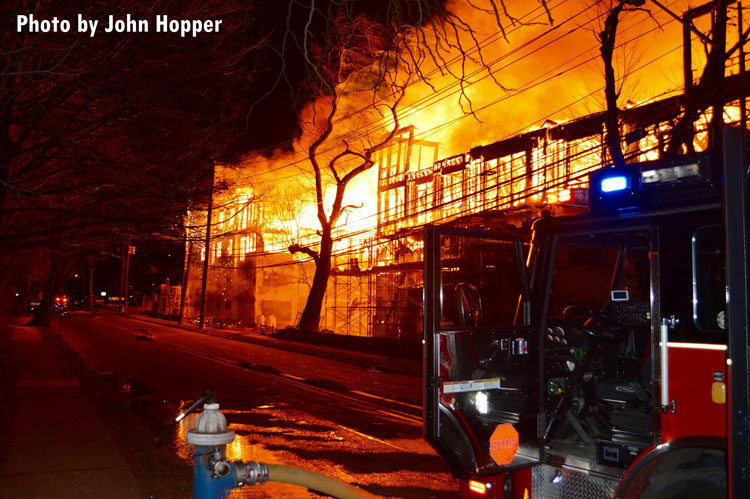 The fire service has ample justifications about large lightweight toothpick construction buildings (LLW/TPC) long before the recent Raleigh (NC) five-alarm ‘Toothpick Construction’ fire. So why is the construction industry and insurance companies not paying heed when it comes to better fire protection features? This can be effected either via the code development process or the industry stepping up and creating ‘best practices’ for an enhanced balance of fire protection systems, namely a full building suppression system and more robust passive fire protection for draft-stopping and fire walls (masonry) that extend through the roof within these residential complexes.

Over the years, the fire service has advocated a balance of fire protection that has fallen on deaf ears. A new fire service tactic to consider before a municipal council hearing and/or state legislation is how LLW/TPC building complex fires (whether these structures are under construction or occupied) are overwhelming local fire department response. For many communities, a fire response must go way beyond the municipality border lines to get a sustainable fighting force to help prevent such an enormous fire from becoming a much larger community conflagration.

In the February 2017, a LLW/TPC building under construction fire occurred in Maplewood, New Jersey. This fire quickly spread to the exposure building of similar construction; this building was approximately a few weeks away from being occupied. This building did, however, have masonry fire walls, although they are not yet required by code; they played a key role in saving the structure. (1)  To give some perspective as to how many other fire departments were needed besides the Maplewood (NJ) Fire Department (MFD) units, below is a small picture of what your fire department will be called upon to mitigate such an incident.

Initial Response and Beyond

A MFD fire station was just across the street from this block-and-a-half long residential LLW/TPC complex. The initial all–hands incident called for all MFD units. Upon arrival, the incident commander’s tactical decisions called for deck gun and aerial master stream operations, one of which protected several 400 lbs. propane tanks, plus the immediate call for one fire unit from the contiguous municipalities of Irvington, South Orange and Orange. Immediately thereafter, a second alarm was struck, bring one fire unit from East Orange and Millburn. Once the second alarm was dispatched, a third alarm was struck bringing task force groups from Newark (three engines and a truck), Elizabeth (three engines and a truck) and Irvington (two more engines and a truck).

This quick multi-department response enabled the fire units to set up defensive tactics in the exposure structure with good interior multi-floor fire attacks. These aggressive fire attacks along with the masonry fire walls made the save. 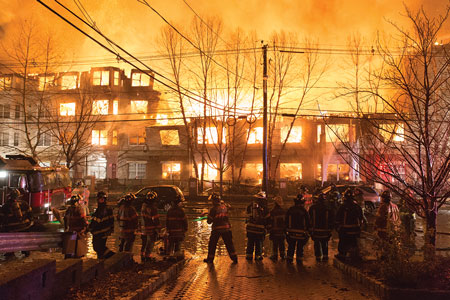 Above, firefighters at the scene of a massive 2015 fire in Edgewater, New Jersey. Photo by Michael Coppola.

The overwhelming fire service concerns with LLW/TPC building fires is that not only are we putting firefighters at greater risk, but positioning other municipalities into a state of jeopardy for adequate fire protection coverage over extended time periods. What the local town councils and zoning boards need to hear is that when a LLW/TPC developer comes to town, the community is then inheriting all the ‘what ifs’ that come with this type of construction under the current code.  One way to justify the fire department’s anxieties is show them the videos and documents referenced in this article to help support the heighten community concerns. (2)

ENOUGH OF THIS!!! If you had a similar LLW/TPC complex fire either under construction or occupied add to the LLW/TPC website reference list below. NFIRS (LLW/TPC) fire incident reports will further support the life safety concerns at next code cycle hearings and to assist local apprehensions when these buildings come your way.

The “ink” did not dry on this article when a nine-alarm fire in Overland Park (KS) ravaged a large apartment complex under construction. Although the type of construction is unknown at this time, the fire extended to numerous exposure buildings. Take a look at pictures and the online videos and make a professional judgement call. Should this incident be added to the LLW/TPC reference list at the end of the article?

Be safe out there,

(1)       In the State of New Jersey since the Edgewater (NJ) 2015 fire, a LLW/TPC developer across the state has willfully installed a full building NFPA 13 sprinkler system, passive masonry fire walls and in some cases provided the fire department with on-site equipment, such as several 35-foot ground ladders for a balcony extraction in an interior courtyard that is not accessible for truck company operations.

JACK J. MURPHY, MA, is a fire marshal (ret.) and a former deputy chief. He is the chairman of the New York City High-Rise Fire Safety Directors Association and a member of the National Fire Protection Association (NFPA) High-Rise Building Safety Advisory and the NFPA 1620, Pre-Incident Planning, committees. He has published articles and authored RICS: Rapid Incident Command System Field Handbook and the Preincident Planning chapter of Fire Engineering’s Handbook for Firefighter I and II and coauthored Bridging the Gap: Fire Safety and Green Buildings. He contributes articles to Fire Engineering and is a member of the Pennwell Fire Group executive advisory board. He was the recipient of the 2012 Fire Engineering Tom Brennan Lifetime Achievement Award.