For this evolution, we had firefighters operate individually. Although we are used to working in teams, working alone forces each firefighter to put his hands on the equipment you have identified as items that are in need of a refresher. I chose not to time this event, to allow the firefighters time to ask any questions they may have, but this same training evolution can be repeated down the road with time deadlines, if desired.

We started with firefighters in full personal protective equipment (PPE) and self-contained breathing apparatus (SCBA), breathing air. The first thing they would do, with gloved hands, was hook up their “buddy breather” to their partners. We had a mannequin on the ground with SCBA on, so this was somewhat realistic in that they have a downed “mannequin” to work on. Once completed, we discussed a few things about the procedure. They then unhooked the buddy breather and move on. 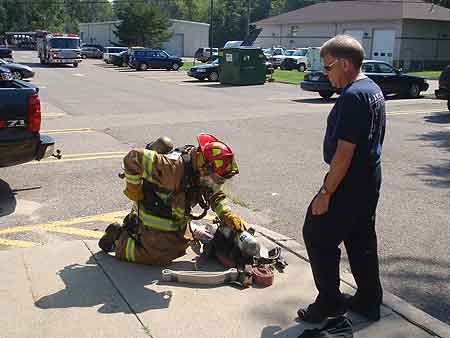 (1) Starting the training drill in full PPE with SCBA, firefighters‘ first task is to hook up their buddy breather to their partner‘s in a simulated out-of-air emergency.

At the next station, firefighters performed a rapid intervention team (RIT) evolution. We had a RIT bag there, and I asked firefighters to hook up a downed firefighter to an air supply from the RIT bag. Once again with their gloved hands, participants took out the air manifold, turned on the air supply and hooked the SCBA up to the manifold. Once completed, I had them unhook the equipment. Since we did this drill in the summer, I had the firefighters doff their PPE and SCBA at this point in the training drill.

Firefighters then moved to the rope that I had laid out for them. They were told to tie the handcuff knot. While doing this, we discussed the advantages of this knot and the many applications it has.

Once completed, we moved to our department’s hydrogen cyanide monitor. This is a new piece of equipment for us, so we discussed where it is normally located. We then took it out and went over the buttons and how they are to be operated to start the unit and how to shut the unit down when finished using it. We then referred to our standard operating guidelines (SOGs) on the use of the unit, so they could look it up at a later time.

At this point, firefighters moved to the lock prop. Members manipulated it from the locked position to the unlocked position and back again. This is for the common through-the-lock method of entry, and the lock is already spun out of its housing. The emphasis is on manipulating the mechanism from the lower positions (5 o’clock and 7 o’clock) for fire department entry purposes.

Once this was completed, we had our department’s air chisel out. This tool was chosen since it is not used often but is still a valuable piece in the right situation. Since it is used less frequently, a refresher might keep it in the forefront of the firefighters’ minds. They had to take out the pieces, hook up to an SCBA air cylinder, set it correctly, and operate it under air pressure. They then had to reverse the process to put it away when finished. 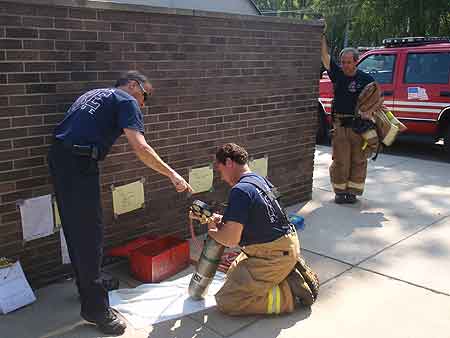 (2) Finishing up the drill, this task involves hooking up the air chisel and operating it correctly.

We then discussed a few pieces of paperwork with each firefighter. The paperwork was a change for us, and this was a good way to get every firefighter to see the form up close and to note the items that had to be completed for successfully finishing off the paperwork. New or updated forms, standard operating procedures or SOGs, and new rules are all fair game.

This was a good drill on a hot summer day. We spent just a few minutes in full gear, but it got each firefighter to put on full PPE and do some operations in full gear. We then moved on to some other training that did not have to be performed in full gear, and most of these evolutions were performed in the shade. Overall, this was a good training day that got us outside for a little while, and our entire on-duty shift had completed training by noon, avoiding the afternoon heat as much as possible.

Starting the training drill in full PPE with SCBA, firefighters’ first task is to hook up their buddy breather to their partner’s in a simulated out-of-air emergency.