The U.S. Fire Administration (USFA) launched an effort to encourage everyone to install and maintain home smoke alarms and, if possible, sprinklers.  More than 3,000 people die in home fires each year, and the majority of them have no working smoke alarm. To prevent these deaths, the USFA, a division of the Federal Emergency Management Agency (FEMA) is sponsoring the nationwide Install. Inspect. Protect. Campaign, which emphasizes that “Smoke Alarms Save Lives.”

“The U.S. Fire Administration tracks fatal home fires every day, and it is tragic to see how many deaths are linked to homes without working smoke alarms,” said Kelvin J. Cochran, U.S. Fire Administrator. “The USFA is committed to preventing the loss of life and we want residents and fire fighters to be safe.”  He added, “Smoke alarms are inexpensive, easy to install, and easy to maintain. We are asking everyone to make sure they have working smoke alarms in their homes, and if possible, sprinklers.”

When both smoke alarms and fire sprinklers are present in a home, the risk of dying in a fire is reduced by 82 percent, when compared to a residence without either.  According to the National Fire Protection Association, between 2003-2006, almost two-thirds of home fire deaths resulted from fires in homes with either no smoke alarms or no working smoke alarms.

Cochran also emphasized that firefighters often die in the line of duty trying to rescue people who did not get out at the first sign of a fire.  He added, “Smoke alarms and sprinklers give you and your family more time to get out, before firefighters have to come in to rescue you.”

The USFA has always promoted fire safety and the use of smoke alarms through materials and in campaigns, such as “Tribute to Heroes” and “Prepare. Practice. Prevent the Unthinkable: A Parents’ Guide to Fire Safety for Babies and Toddlers,” to name a few. Now, emphasizing the importance of both smoke alarms and sprinklers, our PSAs –“My Dad” and “My Mom” – focus on the viewpoint of the child of a firefighter. The campaign materials include real stories of people whose lives have been saved, because they had a working smoke alarm.

The USFA offers a few helpful tips on smoke alarms and sprinklers: 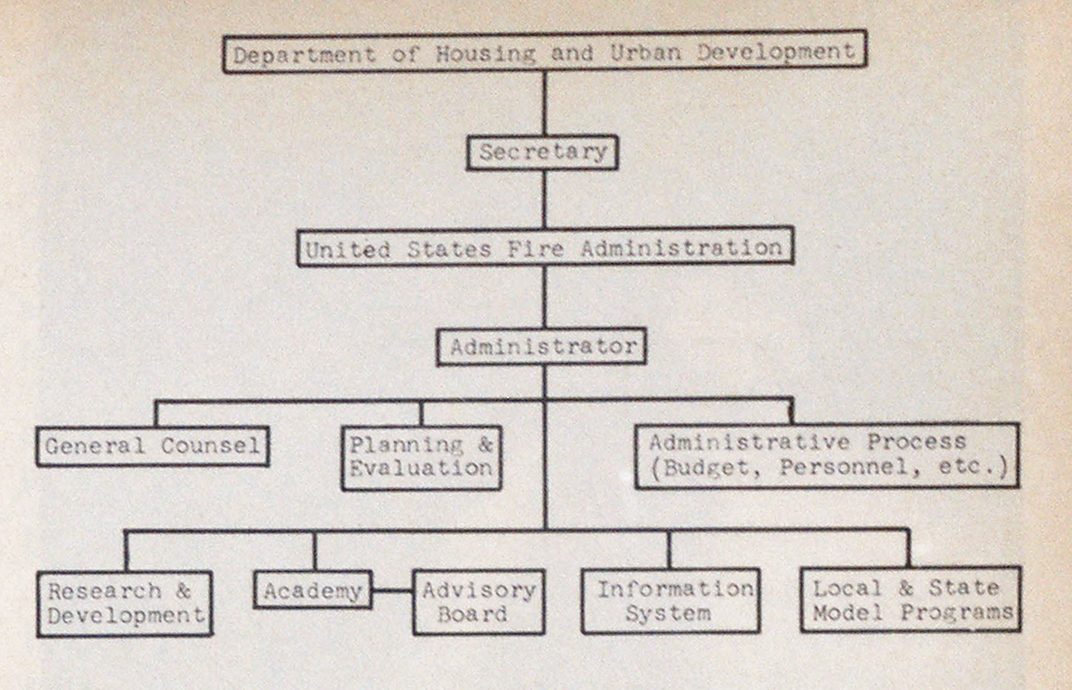 If there is to be “any significant reduction in fire losses, the commission asserted, “the federal government must at some cost help the nation attack the fire problem.” The report called for federal help in providing better training and equipment for fire fighters, developing educational programs for preventing fires, and assisting fire research.

“Accordingly, the commission recommends that Congress establish a United States fire administration to provide a national focus for the nation’s fire problem and to promote a comprehensive program with adequate funding to reduce life and property loss from fire,” the report stated.

“Paramount among the objectives,” the report continued, “is to assist local fire services to improve their effectiveness and broaden their responsibilities from primarily fire suppression to a ‘fire loss management’ orientation designed to prevent fires from happening and reducing their consequences when they occur.”

Other functions of the U.S. fire administration would be to:

A parallel to the fire administration can be seen in the Law Enforcement Assistance Administration, the commission pointed out. The LEAA awards grants for local law enforcement, gathers crime data, keeps criminal records and statistics, gives advice and trains local policemen through its Law Enforcement Education Program.

The commission proposed that the fire administration should be in the Department of Housing and Urban Development (HUD), which is expected to become the Department of Community Affairs under the President’s reorganization program. The commission saw attachment to a cabinet-level department as more likely assurance of continuing support over the years and urged that it be headed by an administrator to avoid being buried far down in the departmental bureaucratic sandwich.

While describing the formation of a fire administration as “overriding need,” the commission at the same time declared, “Emphatically, what is not needed is a federal bureaucracy assuming responsibilities that should be retained by state and local jurisdictions. Fire prevention, fire suppression, and public education on fire safety should remain primarily responsibilities of local governments, where familiarity exists with local conditions and the people being served.”

The report also stated that “regulatory responsibilities for fire prevention and code enforcement should remain at state and local levels.” The commission said past experience showed that “state and local governments are likely to be more dynamic and responsive to changing needs for different jurisdictions than a single federal regulatory agency.”

The divisions of the proposed national fire administration would include a planning and evaluation group to provide effective management and to evaluate the administration programs. There would be a general counsel and also an administrative process that would take care of personnel, budgetary and accounting matters, as well as the review of state and local assistance programs. The research and development division would encourage and sponsor research in the behavioral and physical sciences and engineering areas that have the greatest potential for cutting fire losses. It would work with the National Bureau of Standards, the National Science Foundation and private groups.

The national fire academy would also be a division of the fire administration. Predicting that “all segments of the field of fire protection, both public and private, will benefit from the academy,” the report stated that all segments should participate in developing the academy. In line with this thinking, it was proposed that an advisory board be created for the fire academy.

The commission “found an appalling gap in data and information that effectively separated us from sure knowledge of various aspects of the fire problem” and declared that “in many areas of the fire problem, proposed solutions rest on limited experience, shaky assumptions, and guesswork.”

Therefore, “to help place solutions to the fire problem on a firmer foundation of scientific data,” the commission recommended “that a national fire data system be established to provide a continuing review and analysis of the entire fire problem.”

The information system division proposed for the fire administration would be the fire data base for the fire service and federal and state governments. This unit would provide a “nationwide exchange of information pertaining to fire and life safety.”

Because a uniform reporting system for the entire fire service would be vital to the functioning of the information system, the commission urged that “federal assistance in support of state and local fire service programs be limited to those jurisdictions complying with the national fire data system reporting requirements.”

Another division would be responsible for liaison with local and state model programs developed through the fire academy or the research division. These programs would assist “school fire prevention education, community college fire science, fire service master plan programs, and public media education.” The report added that “federal assistance is envisioned here in the form of education, information, and program grants.”

The national fire administration, the commission concluded, should “complement and help coordinate” the various fire research and other fire-related activities of such federal agencies as the National Bureau of Standards, the forest Service, the National Science Foundation, the Occupational Safety and Health Administration, the Department of Health, Education and Welfare, and HUD.