It is no secret that, on many levels, there seems to be a significant disconnect between the construction industry and the fire service. Our two industries are so intimately connected, and the actions and changes in building design and construction methods have such a direct impact on the way we perform our duties, that it is vitally important for us to continue to bridge the gap between these two industries.

In January 2019, I attended an event in New York City hosted by the Fire Department of New York (FDNY), Underwriters Laboratories, and the International Association of Fire Fighters titled, “Meeting the Challenges of the Future Built Environment Forum” (Photo 1). This two-day event was attended by members representing the construction industry and the fire service and consisted of a number of presentations and discussion panels relating to current building construction issues facing the fire service. After the event, I reflected on a number of things that the construction industry needs to understand about the fire service regarding our mission, attitude, tactics, and the overall mindset we have regarding this hallowed profession of which we are so fortunate to be a part.

It’s About Those Whom We Serve

Fundamentally, one a firefighter’s most important character traits is that of living a life of service to others. The fire service was built around the idea of assuming risk to protect those that cannot protect themselves. Those that take their role as a firefighter seriously understand that the unprotected civilian relies on our skills, knowledge, and abilities to put ourselves in situations that often involve some level of risk to complete the tasks that we all signed up to perform. This firefighter mindset is something that the construction industry needs to understand.

We, as firefighters, are always going to take risks and place ourselves in potentially dangerous situations to perform a rescue or save a life, and those that design and build the structures we operate in are, quite frankly, not in a position or willing to assume those same risks. This highlights the need for the construction industry to design buildings with worst-case scenarios in mind; constructing systems that will aid in firefighting efforts, not hinder them.

Not Everyone Can Get Out

Over the past century, there have been incredible advances in fire protection and life safety measures that have been written into our building and fire codes. Although these additions have been extremely beneficial for occupant safety, almost all of these systems still rely on either expedient self-extrication or shelter-in-place measures by building occupants. As the late Andy Fredericks said in his Fire Department Instructors Conference International 2000 keynote speech—the year before his tragic death on 9/11, “Firefighting today still remains largely a gritty, risky, up-close and personal affair, using tactics and techniques that date back decades. Even on the high-tech battleground of today, it is the soldier and his rifle that still makes the difference in war time. So, until we make greater strides in the fire prevention and fixed suppression arenas, the firefighter and his nozzle will continue to be the difference between life and death for literally thousands of Americans threatened by fire every year.”

No matter how sophisticated our fire protection systems become, there will always be occupants such as the elderly; people with disabilities; children and infants; and, very often, individuals under the influence of drugs or alcohol that are not able to exit on their own and will need firefighters to enter the space to perform a rescue. They rely on us as their last line of defense, and we need to rely on the building to remain structurally sound long enough for us to complete this vital task.

Not All Departments Are Created Equal

This is not intended to criticize individual fire departments, and I am in no way implying that there is difference in performance or dedication between career, paid-on-call, or volunteer firefighters, but the reality is that not all fire departments are created equal, specifically when it comes to staffing levels and response times. The responses to a fire in midtown Manhattan and a fire in a small rural community will be dramatically different in the number of apparatus and firefighters that respond as well as the length of time that elapses before those resources arrive on scene.

As the economic landscape has changed across North America, many career fire departments have had to shut down fire stations, “brown out” rigs, and reduce the number of firefighters on each apparatus to the point where many cities have fewer firefighters protecting their citizens today than they did just a couple of decades ago despite experiencing a dramatic growth in the population of most urban centers.

Staffing issues are not unique to just career fire departments. Ask any chief in charge of a paid-on-call or volunteer fire department, “What are the top three issues that you face?” I’m quite certain that the recruitment and retention of quality firefighters will be among the top answers. Some blame this issue on personal economics and the fact that many people must work longer hours and often hold down multiple jobs just to make ends meet. As a result, they just don’t have the time to invest in other activities. Others point the blame at a change in society and the decrease in overall community involvement. 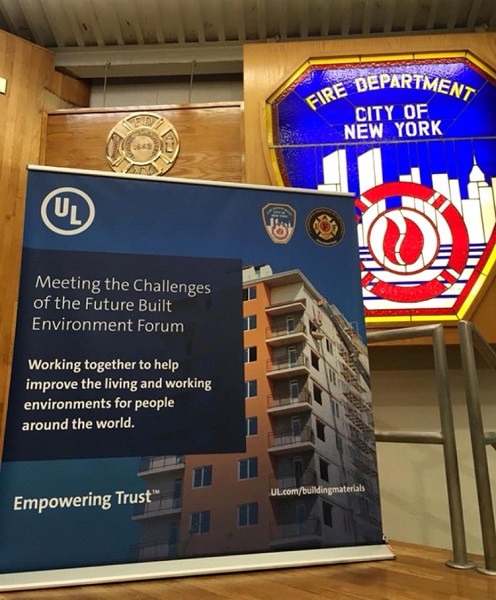 (1) I recently took part in an event hosted by the FDNY, Underwriters Laboratories, and the International Association of Fire Fighters that brought together representatives from the fire service and construction industries. [Photo courtesy of Adam Thiel, Philadelphia (PA) Fire Commissioner.]

As a career firefighter in an urban city, I am far from an expert on these complex issues, but it is quite clear that, regardless of the structure of the fire department (career, paid-on-call, or volunteer), staffing is a universal issue and directly impacts the amount of work that can be accomplished at a fire scene and the time it will take to do so.

So, with all of that being said, if the response protocols and the staffing levels vary so drastically across the nation, shouldn’t we place a higher priority on designing and building structures that better suit the community and the capabilities of the responding fire department? Does it make sense to build a six-story wood frame condominium or a 900,000-square foot warehouse in a community that may only be able to provide an initial response of one or two apparatus? Ultimately, the decision regarding the types of buildings and construction methods that are allowed in a community comes down to the authority having jurisdiction, but external pressure from independent industries and the incredible power of lobbying—like it or not—undoubtedly play a factor in this process.

Today, modern engineering practices allow for the physical mass of our building materials to be continuously reduced to the point where some command staff question their ability to effectively perform a rescue or engage in an interior fire attack because of the lack of personnel and the length of time it takes for them to arrive. Although I don’t necessarily subscribe to this direction of thinking, and I am a firm believer that a thorough understanding of building construction can help alleviate some of these concerns, it is undeniable that our built environment is rapidly changing, and firefighters should be a part of contributing to these changes, as opposed to just being forced to react to them.

We, Too, Have an Agenda

In a day and age where many people are pushing an agenda, manipulating information to fit their narrative and aligning themselves to extremes politically and socially, we in the fire service have our own simple agenda: save lives and protect property. Protecting life and property has been our mission since the very inception of the fire service, and it will continue to be for generations to come. These are not just hollow words; they are the very fabric that hold our profession together and keep us aligned on the correct path. This mission is the reason firefighters spend countless hours educating themselves and training, researching new techniques and practices, analyzing past incidents to learn how we can improve, and becoming involved in the building and fire code process.

Ask most firefighters, and I’m quite confident they will be able to share a personal experience of where they have had to either withdraw from a structure or abandon their mission because the building was compromised from the effects of fire. There is an even smaller contingent of firefighters out there who have experienced similar situations, yet these situations have unfortunately resulted in tragic losses of fellow firefighters. There is nothing more heartbreaking for a firefighter than to realize that he did everything he could to save a life (civilian or firefighter), but because of flaws in building design, insufficient active and passive fire protection, or building degradation as a result of poor upkeep, he was unable to do so. These are just some of the reasons why the fire service has become involved in the building code process and have fought to have our voices heard.

The buildings of today become our work environments of tomorrow, and any changes to building materials and systems directly impact the way we perform our duty. Saving lives and protecting property will always be our mission, and it is our responsibility as a fire service to advocate on behalf of those we have lost—civilian and firefighter—for safer buildings so that we can more effectively honor that mission.

Author’s note: This article is dedicated to the memory of a dear friend and mentor of mine—Gregory Havel. Since the very beginning of my time teaching at FDIC International and writing for Fire Engineering and FireRescue magazines, Greg provided unwavering support and was always there to supply encouragement and a never-ending amount of information. Much like the work of Francis Brannigan, Greg was an advocate for bringing together the construction industry and the fire service and who worked tirelessly to ensure that we are all speaking the same language. His “Construction Concerns” articles have had a profound impact on the careers of countless firefighters, including my own, and I am a better man for having had the privilege to call him a friend. You will be sorely missed. RIP brother.

James Johnson is a firefighter in Vancouver, British Columbia, Canada, assigned to special operations as part of the technical rescue team. Before becoming a firefighter, Johnson worked in the construction industry and completed an apprenticeship to become a Red Seal Journeyman Carpenter. He is also an FDIC instructor, a Technical Committee member for several National Fire Protections Association committees, and a building code representative for the International Association of Fire Fighters.