It’s 0330 hours, and the bells have hit, turning your company out as the first-due engine on a fire in a residential neighborhood. What are your first thoughts as you wipe the sleep from your eyes? What type of structure am I responding to? What’s my staffing? Where is my nearest water supply? Are there any street closures that will change my response pattern? These are just a few questions that you have to answer, all the while listening to the dispatch information and making sure your personal protective equipment, self-contained breathing apparatus, and personal tool are ready. Following are a few considerations as you respond to what could be the fire of your career.

Being a seasoned veteran of your department and knowing your response area, you should already be familiar with what buildings you will respond to. You should be familiar with the construction type; exposure problems; occupancy; and whether they potentially could be occupied or vacant, residential or commercial. Construction type is very important, as each has its own set of challenges.

Type 1 (fire resistive) and Type 2 (noncombustible) are typically contents fires, as the building is protected by some form of fire protection such as retardant material, sprinkler systems, or concrete. A hazard to consider with Type 2 is the nonprotected roof construction, typically steel bar joist trusses. Early collapse after approximately eight to 12 minutes of fire impingement will bring the whole roof down and possibly the exterior walls. Overhead void spaces are ideal for horizontal fire spread, so opening up the ceiling on entry and every few feet while advancing is vital.

Type 4 (heavy timber) typically holds up well during fire conditions, although void spaces and hidden fire spread are concerns in altered heavy timber structures such as a dropped ceiling (according to the building code, heavy timber buildings cannot contain combustible void spaces). These buildings are seen in older warehouses and churches dating from the 19th to early 20th century construction. Whether the structure is occupied, vacant, or abandoned should determine your risk vs. gain strategy. Obviously, if it’s occupied, you are going to treat it differently than a vacant; search is a priority for both, depending on the conditions.

Do not make your apparatus an exposure. Park it outside of the collapse zone to include corners of structures that are the strongest. Be sure your engine driver shows you a three-sided view of the structure, which allows early intelligence of the building, fire conditions, and exposures. Think about where the fire is and where it could be going if the operation transitions from offensive to defensive. Directing second-arriving aerial apparatus to cover potential exposures is a heads-up move; get ahead of the fire before it gets ahead of you. First-due aerial apparatus will typically be used for rescue and access to the structure and usually placed in the front of the building, so leave the “address for the truck.”

Staffing is vital no matter what type of run you respond to. You have to have trained firefighters to accomplish the tasks required. Studies have proven that four personnel are better than three and five is better than four for obvious reasons. The level of training of your crew is a huge consideration. You’re most likely going to have better success with experienced members than a few newer members. The key point here is to train your people and give them (and yourself) the tools to succeed.

(1) Ordinary construction allows fire to spread through voids and is typically found in older buildings. (Photos by author.) 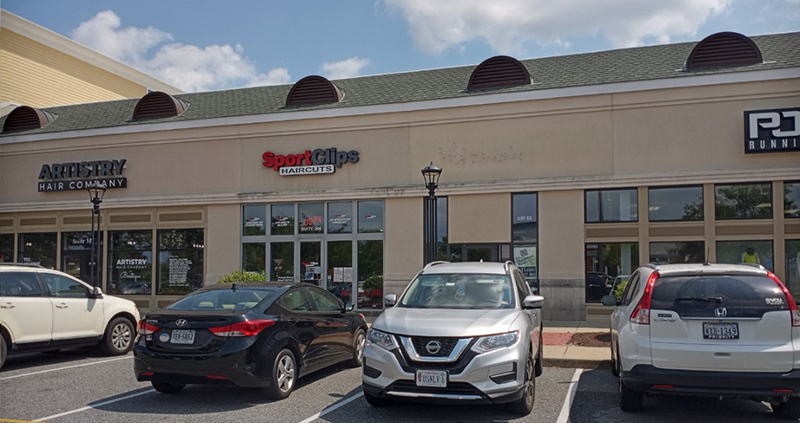 Having predetermined riding assignments is a heads-up move. This allows each member to know what is expected of them on arrival, saves confusion, and allows you to concentrate on the incident vs. giving orders that should have already been determined. Examples of engine company riding assignments are nozzleman, backup, hydrant, and irons. Placing personnel in the correct spots based on experience and training is also a good move.

The fire isn’t the only thing you have to deal with; there are the known or unknown life safety and rescue concerns. What is the dispatch information telling you? What do you know about the area (structure type, occupied vs. vacant)? What’s your staffing and alarm response? What is the time of day? Some departments choose not to lay a supply line with known trapped occupants. They rely on booster water and the second-due engine to bring them a supply line. Assigning your crew to just rescue, rescue and fire attack, or just fire attack (to take fire away from the occupants) will be based on arrival conditions, staffing, and crew experience.

I have learned that bystander information is marginal at best; take it with a grain of salt and make solid decisions. The structure isn’t clear until you search it. Get a search done early and quickly. Usually, the search should be done by a ladder company or even a second- or third-arriving engine, depending on your department standard operating procedures (SOPs). As the first-due engine, you will most likely be going to the seat of the fire, so if you are not immediately faced with a known trapped occupant, be sure the search order is relayed to and received by the appropriate company.

As the first-due engine, you must consider water supply, whether you provide your own or the second-due engine supplies you a line. You need to know what the hydrant capabilities are and which hydrants are closest. You need to decide what kind of a layout you’re going to use—forward, reverse, or split lay. Forward, hydrant to fire, is good as you’re laying your own supply line. Remember to have the driver lay close to the curb on the fire side and slow down while laying the line or it will typically end up away from the curb and block later-arriving apparatus. A reverse lay, fire to hydrant, works well, as it leaves the front of the structure open for the truck company and allows the supply engine to pump from a hydrant to the primary engine. This also provides a backup pump in case of a catastrophic failure of the first-due engine pump. Split lays, laying hose from a corner and second-due engine completes the supply line, is ideal for distant hydrants, usually down cul-de-sacs or short streets. It’s good practice to always lay your own line. This way, if there is any issue with the second-due arriving, hose is already on the ground.

A good proactive practice is to know when and where road closures may affect your response or even the response of later-arriving companies. If a road is blocked and you have to take an alternate route, this may change the response of several apparatus and might even make you second due. Once all companies have marked responding, it may be a good idea to get on the radio and let those companies know of the change in response (“E1 to all companies: Main Street from Second to Third is blocked; E2 you will be first due.”). You may have to take an alternate route to get to the closest hydrant or maybe even let the truck get into the block first—yes, that’s OK. Also, if you are responding from a distance that may allow for a delayed arrival, get on the radio and let the other companies know. As stated earlier, leaving the address for the truck is important, if your policy is for the first-due engine to pull past the fire building and this is altered, let the first-due truck know so they can approach the scene correctly (e.g., you stop short of the structure, the truck can approach from a different direction). 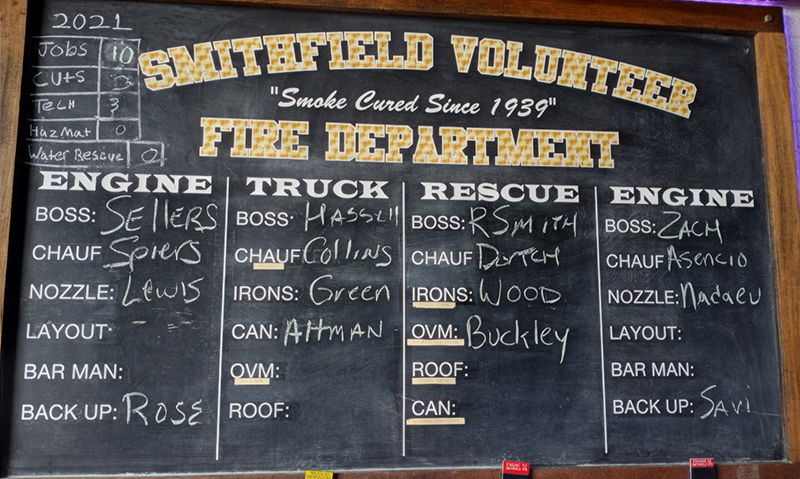 (3) Ride/tool assignments are critical to an organized, effective, and efficient operation. 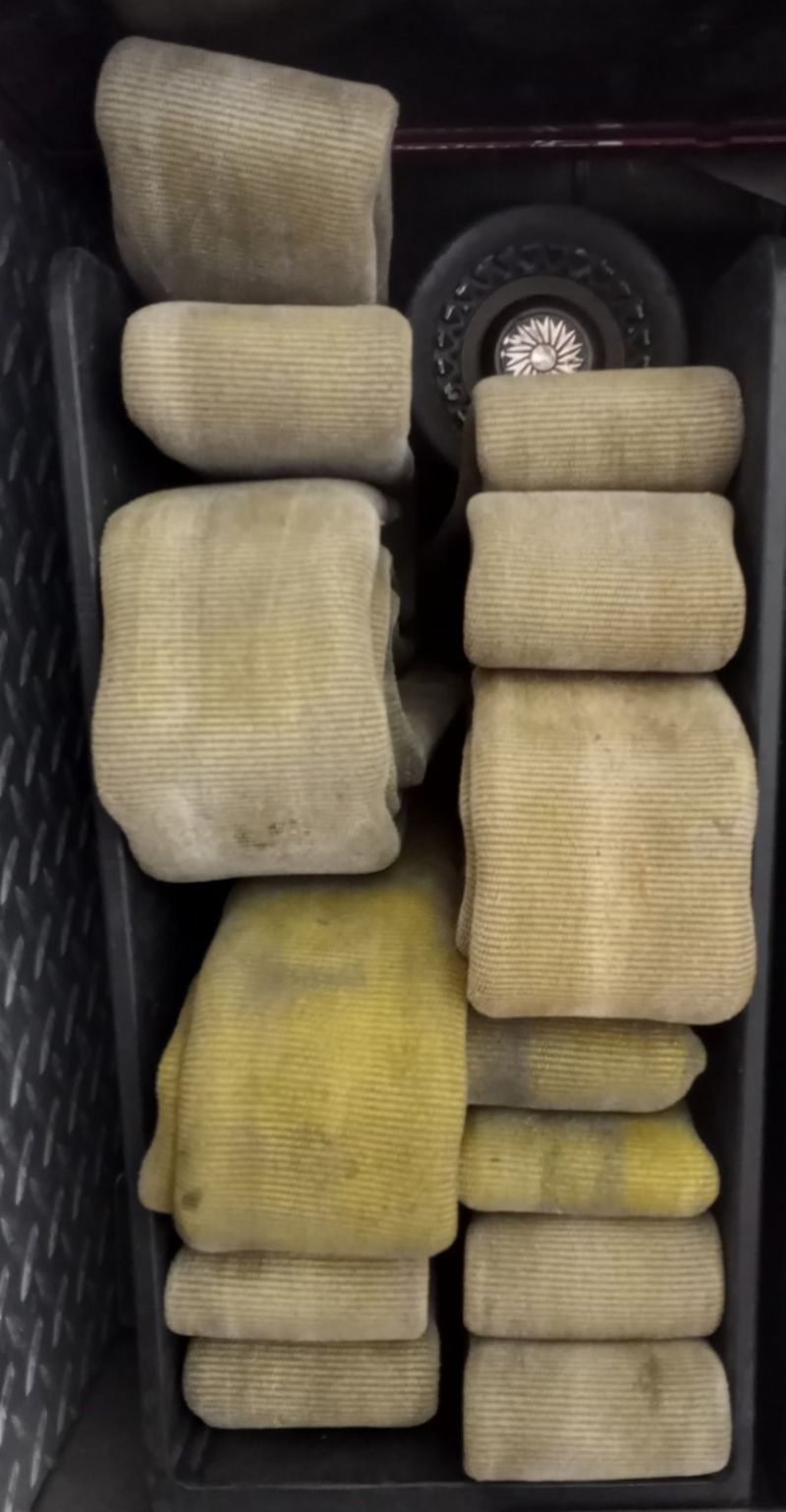 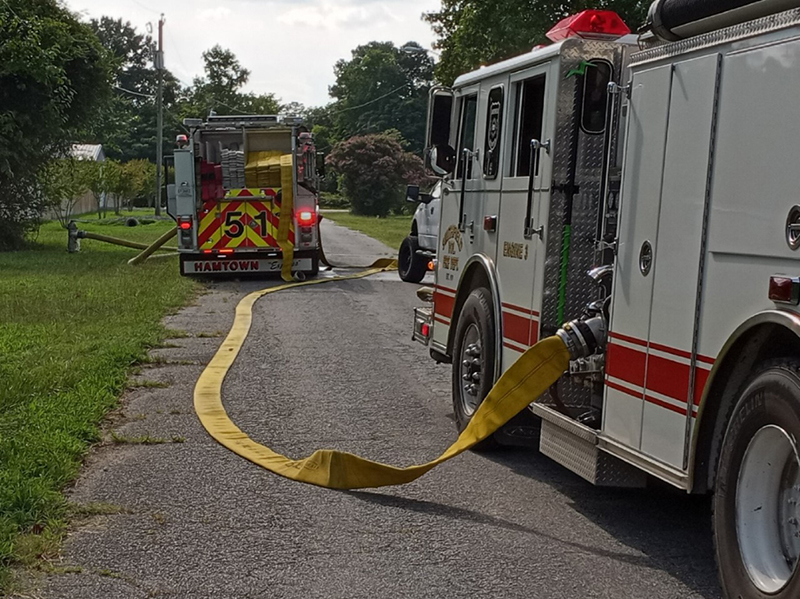 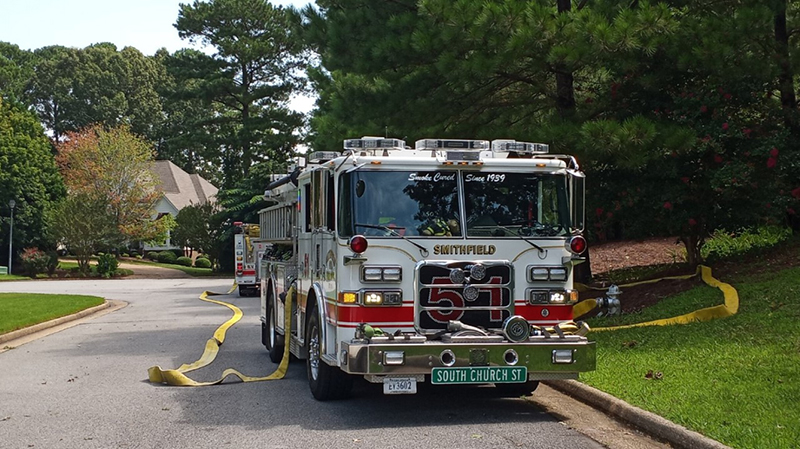 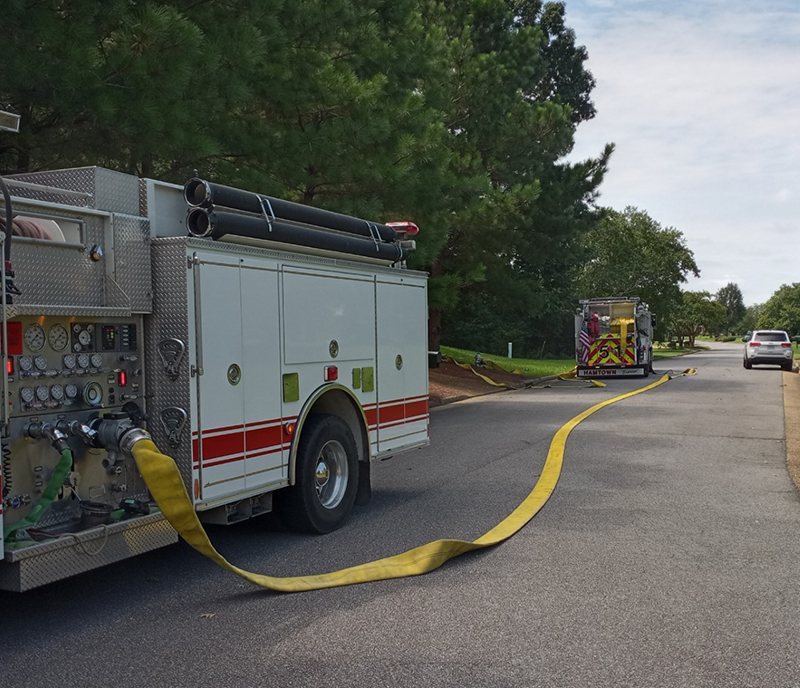 (6-8) Understanding your water supply layout options will lay the foundation for rapid establishment of water supply. 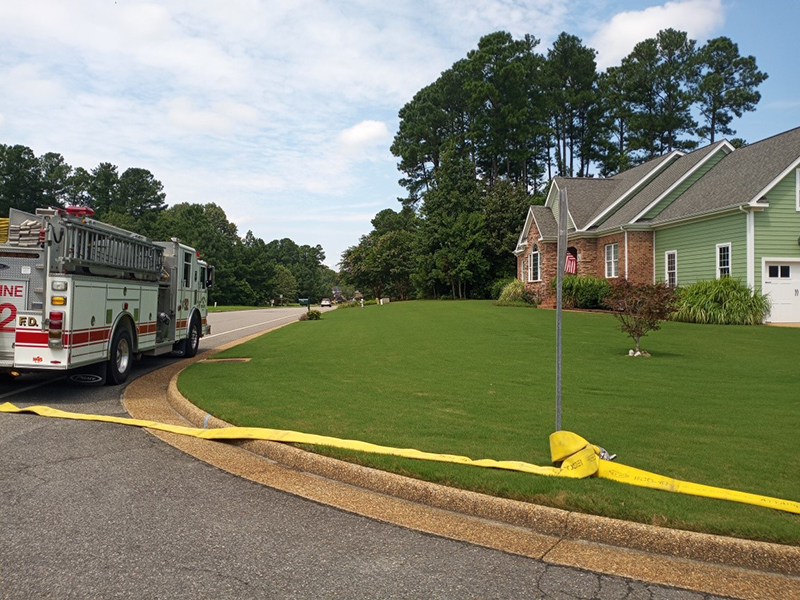 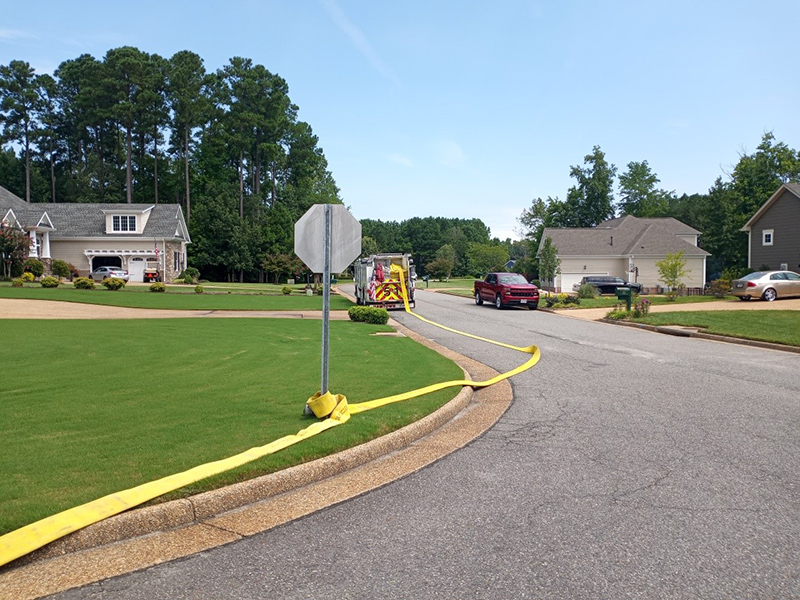 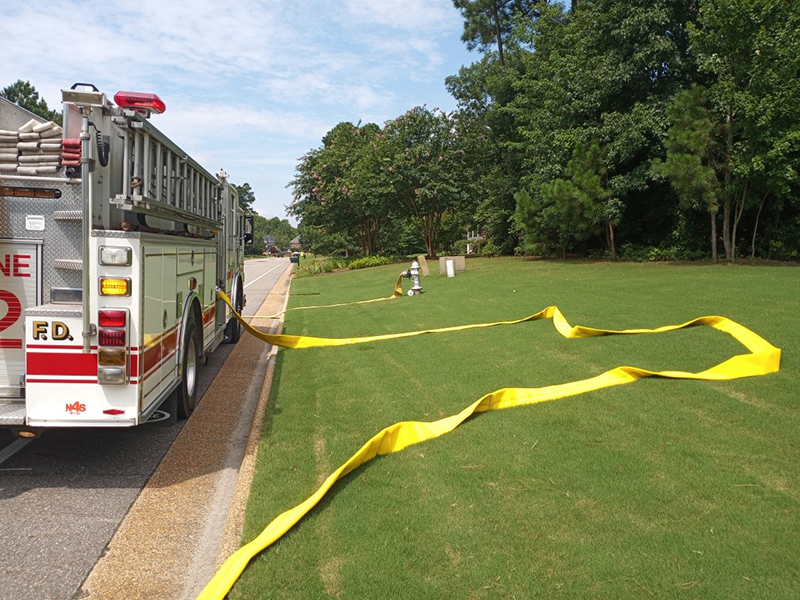 (9-11) If you drop a supply line at an intersection, a split lay is a great way to complete the water supply by the second-due engine.

There are several ways to determine attack line type and length. Most residential structure fires that haven’t spread beyond the structure itself can usually be handled by a 1¾-inch line; 2½-inch lines are good for defensive attacks, exposure protection, or when the volume is just too much for a 1¾-inch line. Many companies have their preconnects at 200 feet, but there are places that don’t necessarily need that much. Estimating the stretch may work for companies that have nonpreconnected attack lines or different lengths of preconnects. A good tip I use is 50 feet from engine to front door and 50 feet per floor (two-story with attic = 200 feet); you have to include the attic. It’s just an estimate and not an exact science, but it seems to work. Obviously, your buildings and layout will affect this, and you must estimate accordingly.

As the officer, you most likely will be calling what line to pull, so look at the building, the fire location, the volume of fire, and the distance from the engine to the building, and make the right call. Your nozzle option is also a consideration if you have both adjustable pattern and smooth bore. Nozzle selection is a hot topic in the fire service; both have a place in residential fire attack, so you, as the company officer, have to make the right decision.

This is just the beginning. Many things will go through your mind; these are only a few for when you’re dispatched as the first-due engine company. Through training, department SOPs, and experience, you should be in a position to begin a successful incident.

Greg Sellers is a 30-year fire service veteran and an instructor in engine and truck operations. He has been a member in both the career and volunteer fire service beginning in the City of Tonawanda, New York.

Professional Development: Developing the Next Generation of Fire Service Leaders