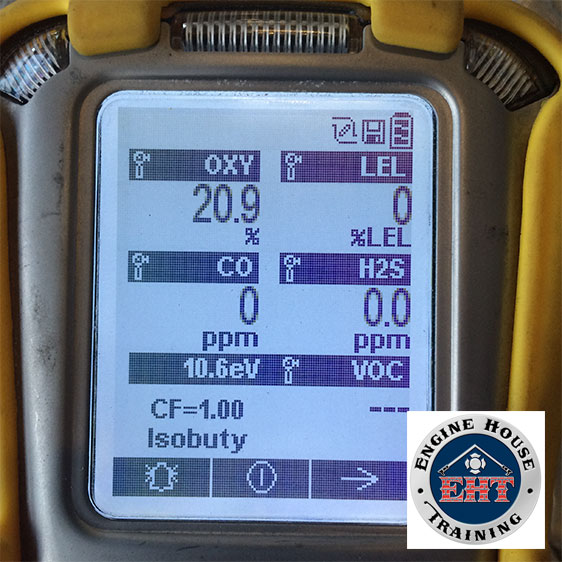 Have you ever been on a gas leak call and heard over the radio: “We have 50% gas in here!” Likely this was not the case, but rather a situation were the operator did not know how to read the instrument. Atmospheric monitoring is a critical function in the fire service. It is used to determine if gas is leaking in or out of a structure as well as a means to determine the safety of the air for firefighters working on the fireground. While we are not all hazardous materials technicians, it is important that we understand how to read a four-gas monitor and what the instrument is telling us.

Most four-gas meters have the standard oxygen, carbon monoxide, hydrogen sulfide, and lower explosive limit (LEL). Oxygen is always standard, as it is critical for life–too little oxygen and life cannot be sustained. Oxygen is measured as a percent in the atmosphere, which typically ranges around 21 percent. Note that although too little oxygen is a bad thing, so is too much oxygen. If readings are found to be 24-27 percent oxygen, take note that something is not right. Also, 1 percent change is equal to 10,000 parts per million (PPM. So if the oxygen is reading 19.9 percent and normal is 20.9 percent, 10,000 ppm of something is in the atmosphere…always error on the side of caution.

Carbon monoxide (CO) is a useful measurement on the fireground as it is one of the Toxic Twins (along with hydrogen cyanide) and is a byproduct of combustion. CO is measured in ppm, and a department standard operating guidelines (SOGs) will dictate appropriate levels for the doffing of self-contained breathing apparatus relative to CO readings.

Hydrogen sulfide is commonly referred to as sewer gas due to its pungent aroma; it too is measured in ppm.

Many detectors are also being fitted with photoionization capabilities to measure volatile organic compounds. These carbon-containing compounds are chemicals such as benzene and toluene and almost always carcinogenic. With the recent rise in firefighter cancer, many are taking steps to try to not identify but rather recognize their presence on the fireground. It is important to understand what the instrument is telling you and correlate it to your safety and the safety of those working with you. Just like the halligan and ax, it is critical to practice with an atmospheric monitor and understand it.

Brian Zaitz is a 14-year student of the fire service, currently assigned as the captain/training officer with the Metro West (MO) Fire Protection District. Brian is an instructor with Engine House Training, LLC as well as instructor at the St. Louis County Fire Academy.  Brian holds several degrees, including an associates in paramedic technology, a bachelors in fire science management, and a masters in human resource development. Brian is currently and accredited chief training officer and student of the National Fire Academy’s Executive Fire Officer Program.

MORE THROW BACK TO BASICS

Family of Deceased MO Firefighter Revelas Cause of Death as Suicide,...