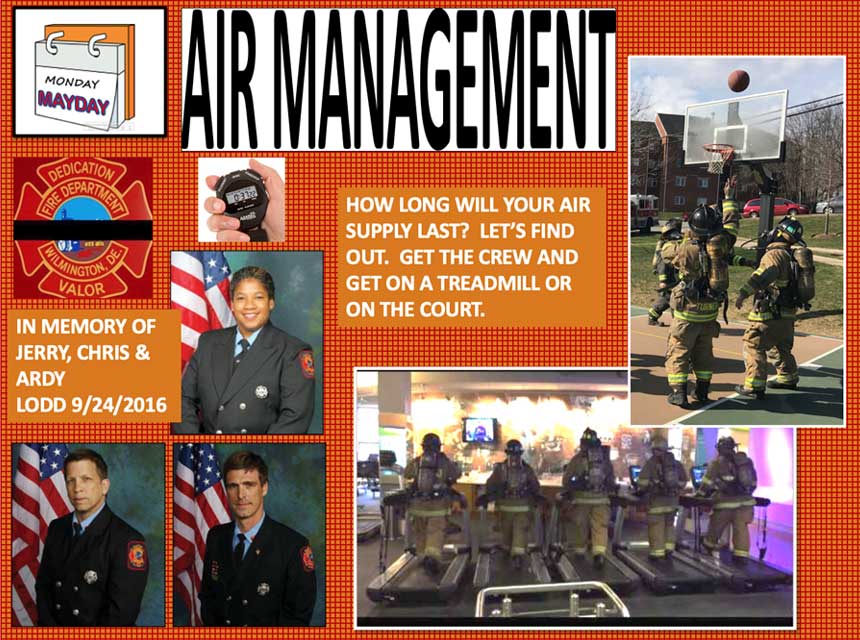 On September 24, 2016, the Wilmington (DE) Fire Department suffered a devastating loss. Two firefighters were killed and five were injured, one critically, while fighting a rowhouse fire. The arson basement fire caused the first floor of the rowhouse to collapse, which sent several firefighters into the fire. A frantic scene unfolded as crews were trying to rescue the trapped and also get the fire under control. During the rescue, the fire continued to attack the building causing further collapse. Rapid intervention team (RIT) members became trapped. Two firefighters did not survive and one firefighter was critically injured; she would succumb to her injuries on December 1, 2016. Please read the NIOSH report on this incident.

Search and Rescue Above the Fire

During the investigation of this incident, the data loggers from the self-contained breathing apparatus (SCBA) worn by the members involved were examined. The Ladder 2 Officer in Charge’s data showed all volume of air was exhausted in 12 minutes. The breathing rate was in excess of 130 liters per minute, which can indicate a significant air loss event.(NIOSH, 2017) This could be caused by an equipment failure or a loss of face piece.

Regardless, the importance of your air supply cannot be overstated.  In fact, listen to this month’s podcast where Wilmington firefighter Brad Speakman talks about controlling his breathing to conserve air while waiting for rescuers. Find the podcast below.

As a reminder, the SCBA rating is based on 40 liters per minute use (45 minute cylinder = 1800 liter volume/40 liter usage). Do you know how much you use? Can you make the air supply last longer than the rating?

This month’s skill/drill is to test your air management ability. Grab your gear and get on a treadmill or on the court and make your air last as long as possible. Do something to find out if you can manage your air supply. It is a life or death skill.

Thanks for visiting this month’s Mayday Monday. Please send in pictures/videos of you and your crew practicing the skill/drill.  Send to gcarroll@louisa.org. See you next month.

Hurricane Response on the Treasure Coast

Drill of the Week: Foam Hoselines