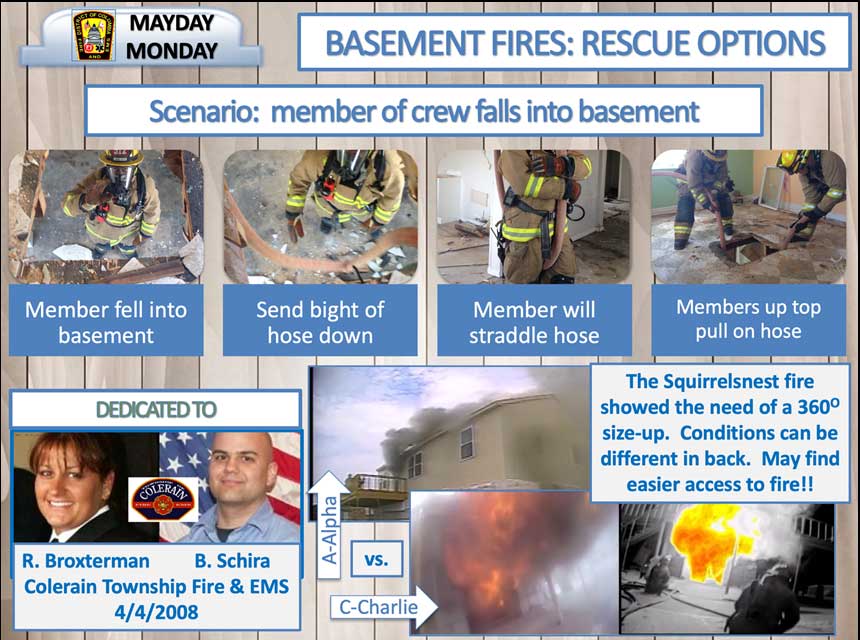 One of the lessons learned from the Squirrelsnest fire was the need to complete a 360° size-up before committing resources to the interior of the building. In this case, a 360° would have revealed to the initial crews that there was an entrance into the basement from the rear of the building. This entrance would have provided access to the fire on the same level. The final Colerain Township Fire & EMS report concludes these deaths may have been prevented, if:

A 360-degree size-up of the building accompanied by a risk-benefit analysis was conducted by the company officer prior to initiating interior fire suppression operations.

You can read about the fire in these reports:  CTF&EMS, NIOSH.

Below we speak with Colerain Township (OH) Fire Chief Allen Walls about the 2008 line-of-duty deaths of Captain Robin Broxterman and Firefighter Brian Schira.

Please honor these firefighters by learning more about this incident and reviewing your operations. Also, take the UL/ISFSI Understanding and Fighting Basement Fires class. Click HERE.

Spring has sprung and it is time to get out and practice firefighter rescue skils!! Please give this one a try and add it to your skills. Don’t forget to send in pictures of you and your crew performing the skill/drill! Here’s some from last months skill/drill. Send to mayday.Monday@dc.gov.

Mayday Monday: Communications and the Mayday