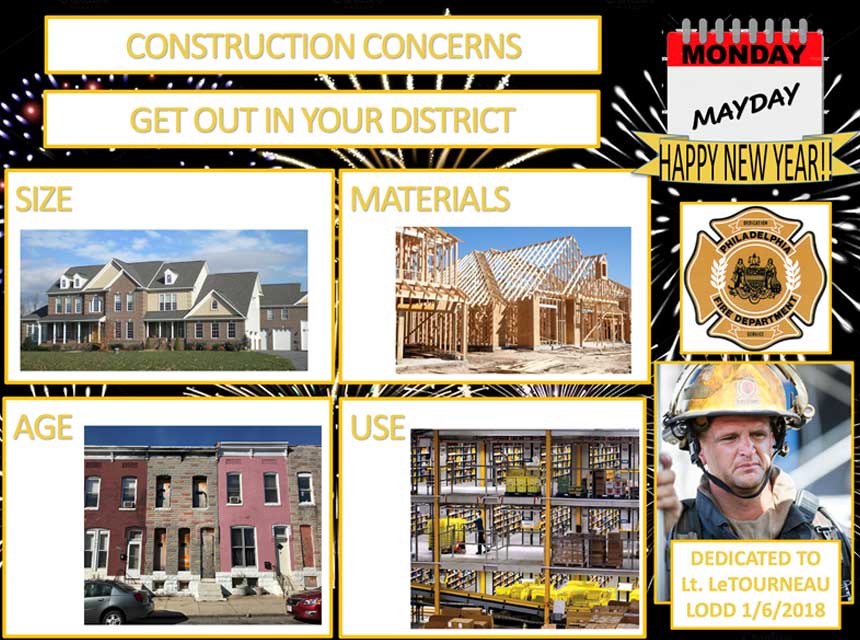 Welcome 2022! The Mayday Monday staff hopes everyone had a great time ringing in the New Year! Let us remember the good of 2021 and work hard to make 2022 even better. Thank you for your support of the Mayday Monday Firefighter Survival Campaign.

This month we review the line-of-duty death of Lieutenant Matt LeTourneau of the Philadelphia (PA) Fire Department. On January 6, 2018, Lieutenant LeTourneau was in command of Engine 45 as they responded for a reported rowhouse fire. They found a two-story, middle-of-the-group rowhouse with a large volume of fire on the first floor. After they made entry, units found the deceased occupant just inside the front door. The firefight was complicated by several factors, including water supply problems, a cluttered interior, and limited access. After 45+ minutes into the fire, the second floor of the house collapsed, trapping Matt. A heavy rescue operation was begun to get to the lieutenant, but he was fatally injured. Read the reports on this fire (NIOSH or PFD).

During the ensuing investigation of the fire, it was discovered the fire building [a Type III-Ordinary Construction rowhouse built in the 1880s] was not in good structural shape. Here are some comments about the house’s condition:

“There were holes in the walls. You could see the brick.”

“The bricks were all cracked and some of the mortar between the bricks [was] deteriorating.”

“There was a tree growing through the windows in the back.”

While there is not a construction type firefighters will not operate in, there are certainly buildings we need to exercise extreme caution when we enter. Take a 100+ year old building that is falling apart add a bunch of clutter and then have a fire attack the structure…that is a recipe for disaster. Other buildings that should cause us concern are extra-large single-family dwellings, commercial occupancies, and super-size warehouses, which are popping up all over the country.

Firefighter James Johnson of the Vancouver Fire Department speaks and teaches about building concerns for the fire service. He asks us to consider four factors when evaluating the building: 1) size, 2) age, 3) materials, and 4) use. Any one of these, coupled with the fire, can make the building dangerous to us.

This month the Mayday Monday skill/drill is to get out in your area and examine your buildings for the four factors listed above Highlight the ones that are out of the ordinary, like really big or really old. Send in pictures of the buildings that cause you concern to tcarroll@louisa.org and we will share to the Mayday Monday crowd.

Drill of the Week: Building Construction and Fire Behavior, Scenario 2