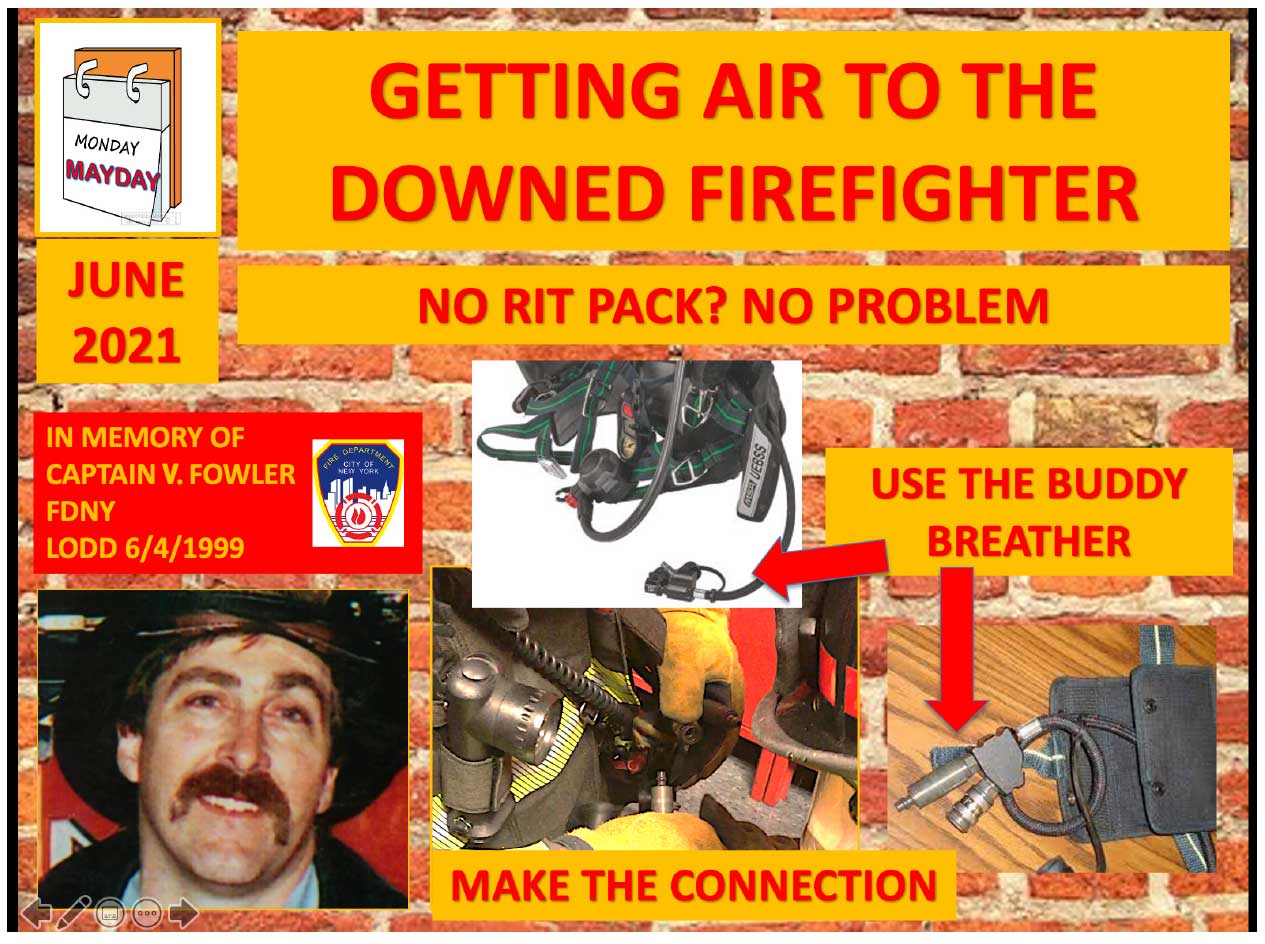 The Mayday Monday Headquarters has relocated!! After a great run in the nation’s capital, the Firefighter Survival Campaign has moved south to Louisa County, in Central Virginia. Don’t worry, though, you will continue to get the same quality monthly firefighter survival tips and techniques.

This month, the campaign is dedicated to the memory of Fire Department of New York (FDNY) Captain Vincent Fowler. On June 3, 1999, FDNY firefighters in the borough of Queens were sent for smoke coming from a detached dwelling. Ladder Company 173, with Captain Fowler in charge, arrived on scene and entered the basement of the building. They were met with heavy smoke in a tight, cluttered basement. As they were searching for the fire, Captain Fowler ordered everyone out. Fowler was running out of air as he met his partner, a rookie firefighter in the can position. The rookie shared his regulator until he had to exit but not before he dragged the captain towards the stairs. Rescue teams worked together to finish the removal 19 minutes after the Mayday was sounded.

The loss of Captain Fowler was a tough blow to the FDNY as he was noted for his work to make the job better. Read this article from the New York Times to learn more about the captain. The after-the-fire investigation revealed the department was not prepared to rescue a trapped firefighter. A contributing cause noted in the report:

“At the time of the fire, there was no Department policy that addressed the removal of a downed firefighter.”

This month’s skill/drill is to practice one of the steps in rescuing a downed firefighter: getting air to the down firefighter. In past Mayday Mondays, we have focused on the use of the rapid intervention team (RIT) pack to ensure the member in trouble has an air supply. This month, we look at what to do if you do not have a RIT pack. Rescuers can use the buddy breather features of your self-contained breathing apparatus (SCBA) to keep the air flowing.

After you are done with your practice session, go check out this month’s Mayday Monday podcast. We talk to Vinny Fowler’s brother, John Fowler, and FDNY Captain Liam Flaherty, a close friend to the Fowler family. You will learn more about the captain, the FDNY, and the incident. In addition, it is loaded with great nuggets of knowledge from two experienced firefighters

Please practice this valuable skill. We don’t want the first time you do this to be when a firefighter is in trouble. Send any videos and pictures of you and your crew performing the skill/drill to gcarroll@louisa.org. Thanks for reading and go practice!

Mayday Monday: Communications and the Mayday