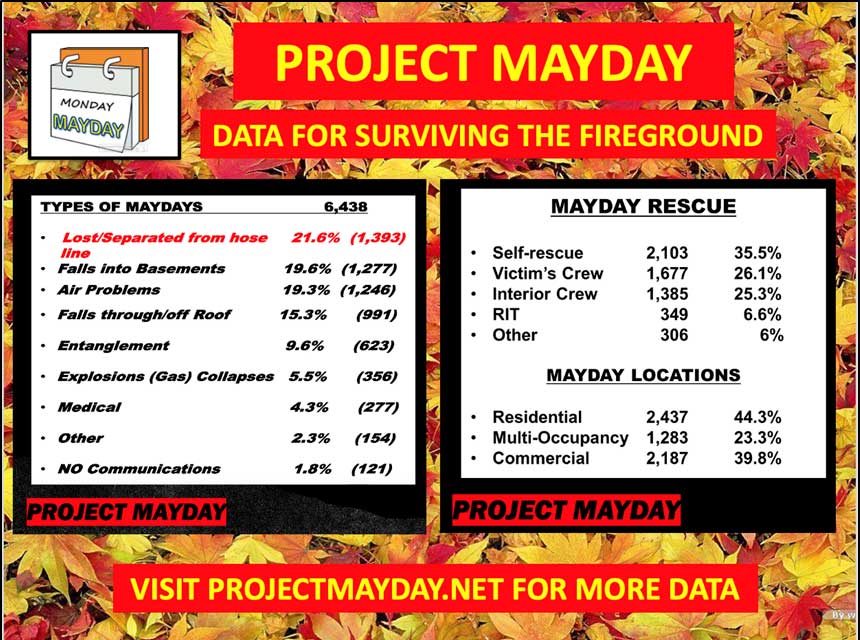 It’s time to put the Halloween candy down and dig into another edition of Mayday Monday. This month we highlight the work of Don Abbott and Project Mayday, a Web site that collects and examines information about firefighter Maydays.

Since 2015, Don, who worked for Chief Alan Brunacini of the Phoenix (AZ) Fire Department, has been reviewing the submissions and developing data that reveals the demographics of firefighter close calls and line-of-duty deaths. This month’s Mayday Monday is dedicated to the memory of Chief Bruno; hear some of his thoughts on air management. Bruno always had a way of simplifying big ideas/issues in the fire service.

Since 2014, Project Mayday has collected information on firefighter close calls and near misses. The database includes submissions from thousands of Maydays. A sampling of the information includes this:

This chart shows that Maydays happen to firefighters of all ages and experience. We cannot get complacent as we get older and acquire more time on the job. Another interesting find in the data from Project Mayday is this:

Information submitted to the project shows the importance of self survival skills. A bulk of the firefighters who find themselves in a Mayday situation are able to effect a self-rescue. The data supports the need for rapid intervention teams (RIT) as 349 firefighters were rescued by the RIT.

This month’s skill/drill is to visit the Project Mayday site and dig deeper into the data. The information provided will help you to focus your training and develop procedures to survive the fireground. Don Abbott continues his contribution to the fire service with this valuable resource. We need to take advantage of Project Mayday.  In addition, if you were involved in a Mayday situation, please submit the information to the site. It may help a fellow firefighter.

Below is my talk with Don Abbott:

Professional Development: Developing the Next Generation of Fire Service Leaders

The Wildland Firefighter: Where Are You From?