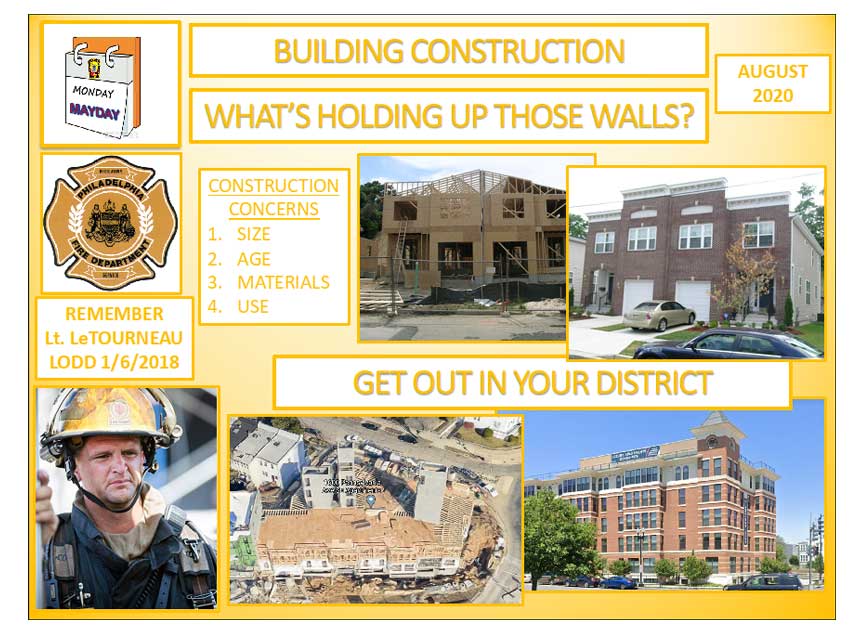 Although not an August line-of-duty death (LODD), this month we honor Lieutenant Matt LeTourneau of the Philadelphia (PA) Fire Department (PFD).  Matt was killed in the collapse of a row house in January of 2018.  The PFD released an After Action Review of the fire last week and we felt it was right to present in this month’s Mayday Monday.  Matt was involved in the ISFSI/UL FSRI Basement Fire research project we presented in the June 2020 Mayday Monday and a friend to the staff.

On January 6, 2018, the Philadelphia Fire Department responded to a row house fire. Units found a typical middle-of-the-row dwelling with heavy fire showing on the first floor.  Engine 45, with Lieutenant Tourneau in charge, was the first-due company. They initiated fire attack on the first floor.  Just after making entry, they located and removed the sole occupant of the old, structurally-weakened, excessively-cluttered house.  About 42 minutes into the firefight, a V-shaped collapse trapped and killed the lieutenant.

Here is a link to the PFD report:  Colorado St.

“At a structure fire there is a finite amount of time in which responders can safely get the job done via interior operations. At some point a building on fire will deteriorate to a condition that makes it no longer safe for firefighters to be inside, or the smoke and fire conditions will become so intense that the interior environment is no longer compatible with life.”

This month’s skill/drill is to get out in your response area and review the buildings. We have had previous skill/drills that emphasize fire behavior and fire suppression. This is only one part of the fire fight. Now, we will add building intelligence to our knowledge. Understanding fire behavior/dynamics and the buildings we respond to will help us survive the fireground.

Please send pictures of you and your crew walking your area.  Send them to mayday.monday@dc.gov .

Train to live. Live to train.

Hurricane Response on the Treasure Coast