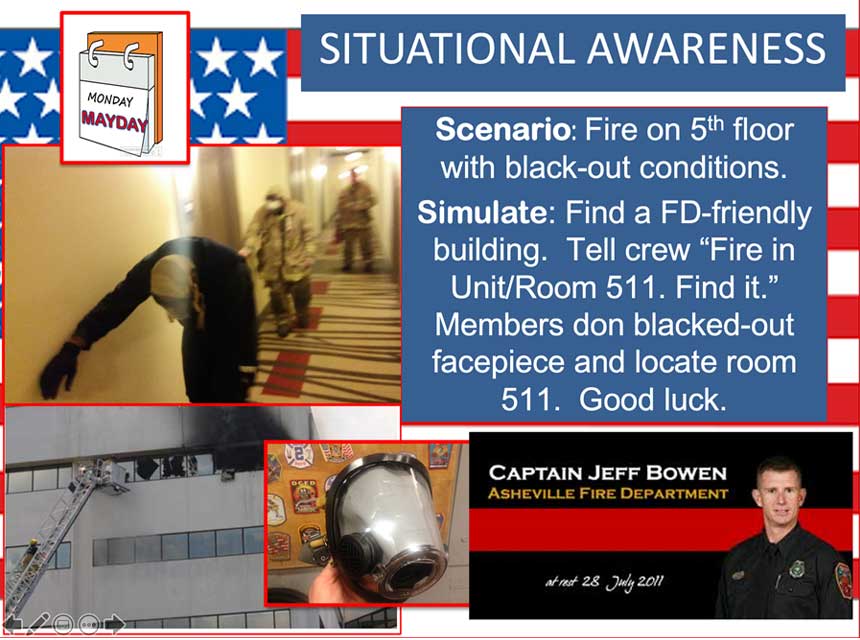 Welcome back to another edition of the Firefighter Survival Campaign. July 4, 2021 was the 245th birthday of our great country. Hope you had a great Independence Day.

This month we visit the Asheville (NC) Fire Department. In July of 2011, they responded to an automatic fire alarm in a six-story medical building. As units arrived, they recognized the building was actually on fire. An arsonist set a fire on the top floor. The firefight was uncoordinated despite the department having a standard operating guidelines addressing these types of fires. The maze-like setting of the fire floor caused issues, as did water problems. Firefighters found smoke on lower levels causing them to begin using their supplied-air earlier than expected.

As they made the fire floor, some members were already well into their air supplies. Captain Jeff Bowen and his crew found themselves out of air and disoriented. The captain seemed to be going back into the fire instead of making his way to an exit. His partner, Firefighter Jay Bettencourt, tried to get the captain headed in the right direction but was having difficulty. After Captain Bowen ran out of air, Firefighter Bettencourt attempted to use their buddy breathing connections. Unfortunately, the captain succumbed to carbon monoxide and Firefighter Bettencourt was severely impacted by the smoke. Bettencourt remained steadfast in the face of death and dragged Captain Bowen down the stairs as other rescuers came to their aide. Look at these links to learn more about this incident:

Fortunately, Firefighter Jay Bettencourt survived this deadly fire and has become a voice for the fire service. Please honor the memory of Captain Bowen and the close call for Jay and study this line-of-duty death/close-call story. It can happen to anyone.

This month’s skill/drill focuses on situational awareness. In the Asheville incident, firefighters faced zero visibility in a maze-like setting. One tactic we can use is to orient ourselves on the floor below the fire before making the fire floor. This will allow us to see the setup in a smoke-free environment before committing to the hazard zone.

Let’s practice this tactic. Find a fire department-friendly building and pretend you needed to locate a fire room on an upper floor.  Have crews “size-up” a smoke-free floor looking for room “X.” Next, have the crews don vision-obscured face pieces and try to find the room again. Did they succeed in their search?

Please practice this skill/drill. It may prove valuable.

Thanks for stopping in for the July 2021 Mayday Monday. Train to live—live to train.