The biggest challenge for most volunteer fire departments is staffing—being able to provide a fast, reliable, trained membership to those we swore to protect in an emergency. Many departments struggle mightily during the workweek and run automatic aid on many calls. A department in upstate New York started a program that can be a model for such struggling departments.

How the Program Came About

The Catskill Fire Department in upstate New York serves a population of approximately 8,000. It is the county seat and shopping hub for Greene County. Naturally, the population in and around town swells during the day. The all-volunteer department runs three engines, a tower, a heavy rescue, and a brush truck. The roster consists of 50 active members. The officers consist of a chief with two assistants, a captain, and two lieutenants. The administrative side consists of a president with a board of directors. This group of dedicated people answers about 400 fire runs a year. In more than 200 years, the department has never failed to respond to a call.

The first-due area has a very urban center, where 80 percent of the alarms and fires occur. The center of town consists of many two-, three-, and four-story buildings of wood frame and ordinary construction. Many are attached, like in most Northeast cities and villages. Many 2½-story balloon-frame homes, which were once single-family homes, are now converted into multiple dwellings, with up to six apartments in the bigger homes. They make up the area outside the center of town. The first-due companies on the edges of town have the shopping malls, car dealers, and some light and heavy industries.

Put Out Your Recruitment Fire with ‘Big Change’

The Staffing Dichotomy: Quality vs. Quantity

In the winter of 2019-2020, the department experienced three working fires in a week. At these fires, members from different departments showed up at the scene before a second alarm was even called for. This is because of the proximity of their day jobs and their being able to leave work. As the county seat, Catskill has many firefighters from other departments who earn their living in the first due. At each fire, these firefighters ask to assist. Over the years, this has happened pretty often, depending on the department’s needs.

One of those firefighters is the town ambulance administrator. He happens to be a past member of the department who, from time to time, will ride out on the apparatus. He was familiar with Catskill and how it operates and vice versa. However, most who asked to help did not operate in the types of structures common in Catskill. They had a heavy load of single-family homes with not as many exposure issues that Catskill encounters. Plus, Catskill has many high-occupancy facilities including many nursing homes, schools, senior housing, and assisted-living facilities.

After some thought on the issue, the captain messaged the chiefs and asked about formalizing some type of program for these firefighters from other departments who would regularly show up at some of the more involved calls. All were in favor of this idea and gave the captain permission to put a program together. 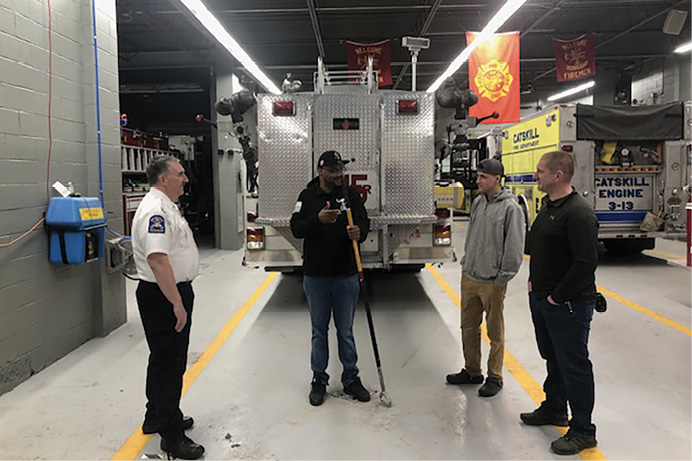 (1) Catskill Fire Chief John Holt (second from left) goes over the Eckert hook with some of the ride-along members. (Photo by author.)

In New York State, a firefighter is permitted by law to offer his services to another department on an ongoing basis as long as the chief of the department receiving the aid and the chief of the firefighter’s home department agree. Catskill decided it wanted these firefighters to ride in on the apparatus as part of the team, not drive in their personal cars and jump into the middle of the operation. This way, the firefighters could ride on the apparatus like the regular members and be given assignments by the officer of the apparatus. This would be much more efficient for the operation and safer as far as accountability.

Catskill Fire posted about starting this ride-along program on its Facebook page. Within hours, 11 firefighters responded to be a part of the program. It was a good-quality group—a past chief, past captains, and good firefighters who had worked with Catskill Fire through the years at different times. Only one lacked significant fire experience.

The next step was to get this group to transition into operations smoothly and confidently. A meeting was held for all the interested firefighters with the captain and the chief of the department. The agenda covered the following:

This program was not started because of a critical need for staffing, but staffing was a benefit. The program allowed the ride-alongs to ride and gradually be brought along at each member’s pace. Some had years of experience and obviously operated as such. Others needed some time to feel comfortable in all they were asked to do.

How the Program Worked/Enhanced Operations

During the workweek (before the program), for an automatic alarm a chief, an engine, and sometimes the tower would generally answer with six to 10 firefighters. Obviously, the tower rolling depended on the number of members answering. When the program kicked off, we immediately added three ride-along members to our core workweek crew to answer alarms.

The first alarm after the program’s inception was a reported gas leak, which calls for an engine and a tower. That day, the engine ran with four, and three were ride-alongs. The chauffeur was a Catskill member, the acting officer was a current captain in the Hudson (NY) Fire Department, and a Hudson and a Cairo (NY) Fire Department firefighter rode the back (Catskill and Hudson run second due to each other; they operate alike and are very familiar with each other). The tower ran with five Catskill members.

The inaugural run was staffed so sufficient personnel were available on both apparatus. If Catskill ran with just its own six members, there would have been two pieces of apparatus with three members on each. Therefore, Catskill realized an immediate benefit with the program.

This type of success has repeated itself over and over. Catskill lost three daytime drivers when COVID hit; this program helped plug those gaps. Since the program’s inception, the members have chauffeured and acted as officers when needed. Catskill provides driver training to familiarize personnel with the apparatus, but they must be chauffeurs at their home departments to be Catskill chauffeurs.

Catskill Chief John Holt stated, “This program has strengthened us not only in numbers but in added knowledge. We have a current Hudson captain who, on occasion, will ride as the boss on the first due. We believe in him and he believes in us, after months of riding and working closely with us.”

Hudson Captain Mike McCrady said the following about the program: “I think it’s awesome. I always felt like a wasted firefighter during the day watching Catskill go past my place of employment. I now have the ability to help them help their community.”

This program can be a blueprint for others in the country. If your department is struggling and debating about adding automatic aid, you may have firefighters right in your area from other departments who can run with you. This would alleviate burdening another department that most likely is in the same situation. Catskill is always looking for outside-the-box ideas to help keep a robust and trained force responding day or night. This happens to be the latest one.

As a volunteer service, we must have our eyes wide open when it comes to looking for ideas on keeping a healthy, sustained service. This is about putting a trained force on scene quickly to save life and property. Keep thinking of ideas. Actively pursue what other parts of the country are doing. The fire service recipe for success changes all the time. It can be a different recipe from town to town. You better know what your recipe is, or you aren’t really going to serve the public what it truly needs.

Ed Dolan is a captain in the Catskill (NY) Fire Department and has served more than 15 years as a chief officer. He is manager of maintenance and emergency operations for the NYS Thruway Authority Catskill section and a past shop steward for Teamster Local 72.