By now, most of us in the fire service have had some form of self-contained breathing apparatus (SCBA) profile reduction training. The “how” and “why” are very simple: We need to overcome obstacles such as narrow hallways, collapsed areas, and void spaces as well as narrow/enclosed hallways, hoarder houses, small bedrooms, and even smaller store/shop aisles.

Moving a Down Firefighter Up Stairs

Improvised 2-to-1 Hauling System for a Down Firefighter Removal

Survival Options for the Down Firefighter

Training Minutes: Navigating Stairs with a Down Firefighter

Low profiling or profile reduction has usually been an offshoot of technical rescue and firefighter survival training, teaching you how best to properly and efficiently move through obstacles as you attempt self-rescue or to rescue others. What we are examining here are the critical need for profile reduction and its role in the exfiltration part of rapid intervention team (RIT) operations.

Let’s set some parameters for basic reference. When looking at the common door widths we encounter daily, openings can be anywhere from 28 to 36 inches wide. Hallways in lightweight residential structures in the southern United States can average from 36 to 44 inches wide. Your local construction may vary. The problem here is that this becomes a “choke point” when firefighters try to enter when they are wearing bulky gear and equipment (photo 1). If we take an average adult male of 5’10” to 6’ tall weighing an average of 180 pounds with turnout gear and no tools, the average width is 24 to 26 inches! This is just an average when measuring individuals with the same stature and the same type of gear. Firefighters come in all shapes and sizes, but we can all agree that our gear adds bulk and mass (photo 2). 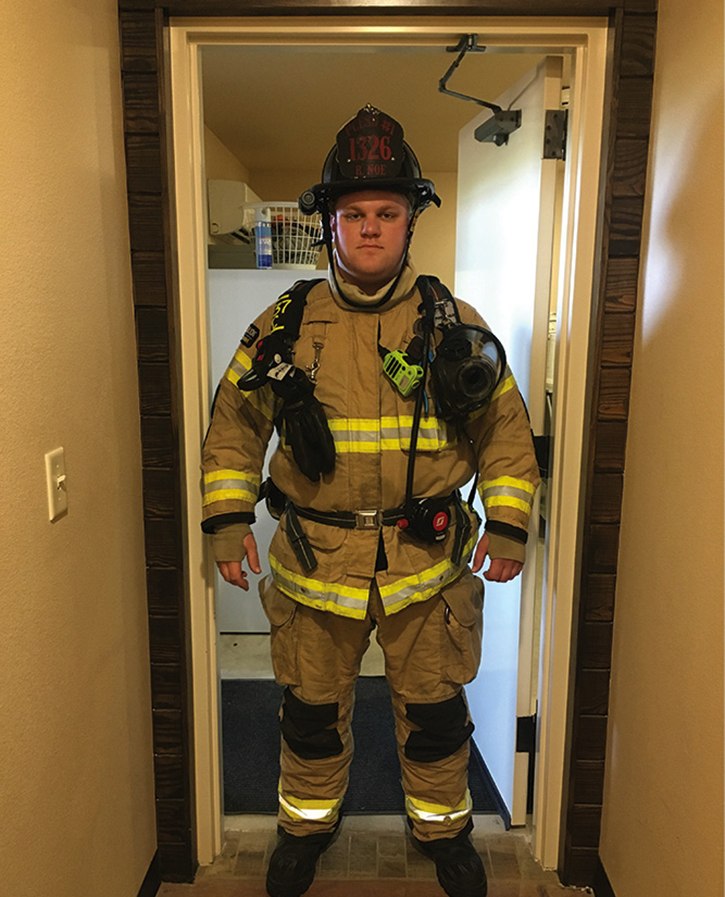 (1) A firefighter stands in a doorway in gear. Note the clearance issue at his shoulders because of the gear. (Photos by author.) 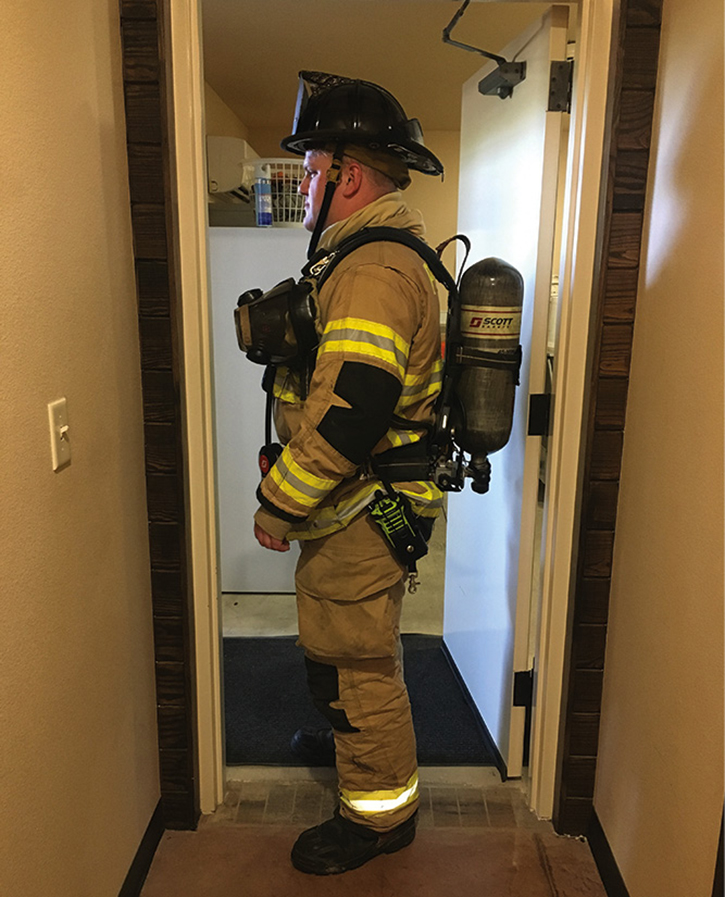 (2) In the same doorway, the firefighter’s self-contained breathing apparatus (SCBA) is causing a choke point.

Now that we have an average baseline, we know that one firefighter being dragged down a 36-inch hallway by two firefighters standing shoulder to shoulder is not the most efficient use of force. There will be an ongoing battle for leverage, communications are going to have to be instant and clear, and the firefighters doing the dragging will be exposed to the products of combustion overhead. Some fire service members advocate the use of a tool under the pack frame for leverage. This method moves the firefighter’s torso off the ground and provides less friction while moving dead weight. This is an excellent technique provided you have a wide enough space and fire conditions allow you to stand (photo 3).

(3) Two firefighters with a tool dragging a down firefighter down the hallway. Note the clearance issue. 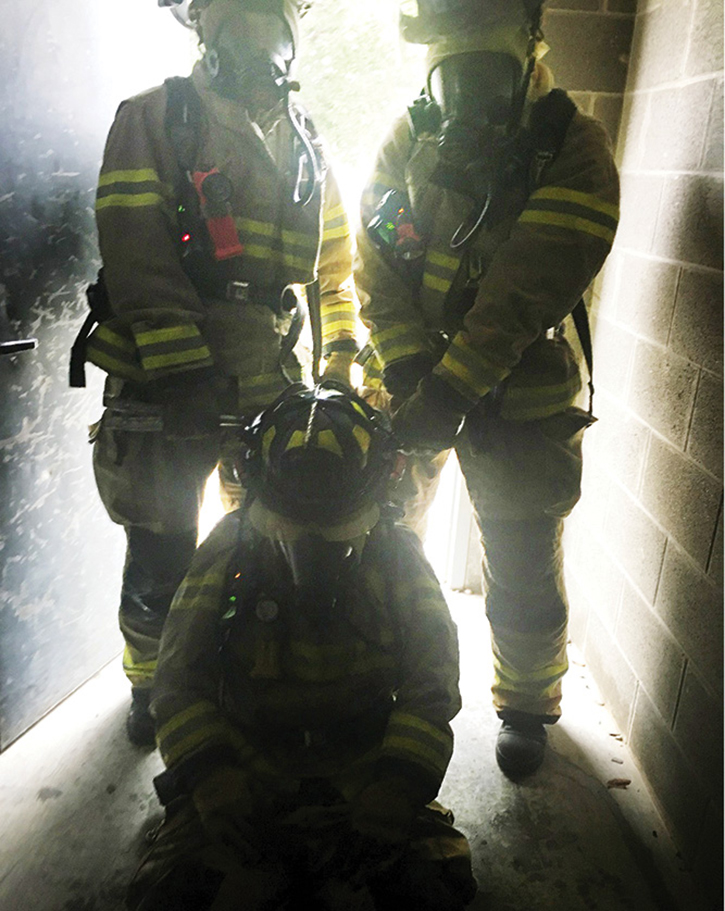 Even in a wide hallway, firefighters may have to contort and maneuver around obstacles; this also calls for constant repositioning. Lifting dead weight off a floor in high heat will also exhaust your crew more quickly. Being under the thermal layer on entry and exit is key to our orientation and survivability.

The entirety of this technique revolves around the premise of low profile—keeping our folks in line and facing toward a safe area or an exit point. Also, eliminating personnel pushing instead of dragging over obstacles reduces firefighter fatigue and enhances communications.

Fifty-four percent of Maydays happen to members of the first-arriving units, while 78 percent occur to the combined first- and second-due units. Fire conditions are still at their worst; being able to stand up to effect a rescue of a trapped or disoriented firefighter is not realistic. This may be occurring as the RIT is being established, or even before that. Since those first few minutes may be staffing intensive, it is crucial that we adapt to deteriorating conditions and be prepared for a possible firefighter rescue. I am not calling into question any instructional technique; this technique is accepted in the fire service.

There are three critical factors in play on common Mayday calls: high heat, low visibility, and high emotions. Today, commonly accepted procedure advocates we locate down firefighters and address air supply first. Secondary to that is moving the firefighter to a safer place. If we go along with the premise that two firefighters can move a victim a short distance, then we are advocating a rapid movement to a tenable position. Time is the most crucial factor in all RIT operations. Air supply will also be a primary concern, but the idea is to get somewhere else fast.

Today, most turnout gear has the integral drag rescue device (DRD) system. First adopted in the early 2000s, this system allows a down firefighter to have a DRD inside his turnout gear ready to deploy. The DRD is specifically designed for one purpose: dragging a down firefighter. This will be our anchor point for the technique described.

Setting Up the Mule Train

After pulling out the hook-and-loop fastener and DRD, Rescuer 1 loops the DRD through his SCBA waist strap or secures it over his wrist; this will help alleviate any grip issues later (photo 4). This also secures the down firefighter even in zero visibility. Rescuer 1 then grabs Rescuer 2’s SCBA shoulder strap (or pack frame), which completes the Mule Train (photo 5). 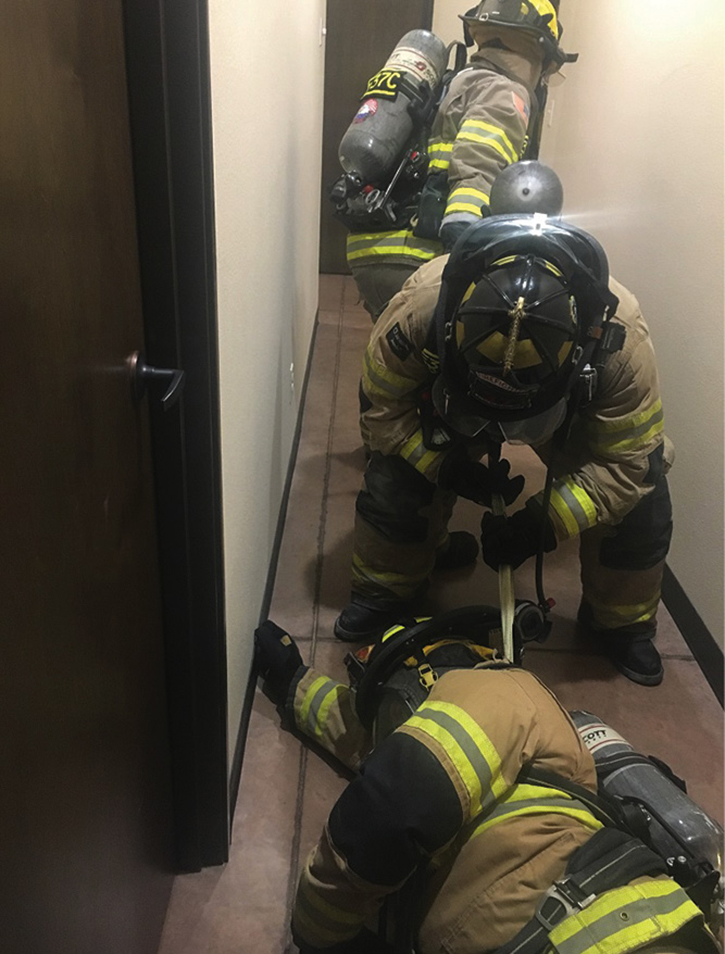 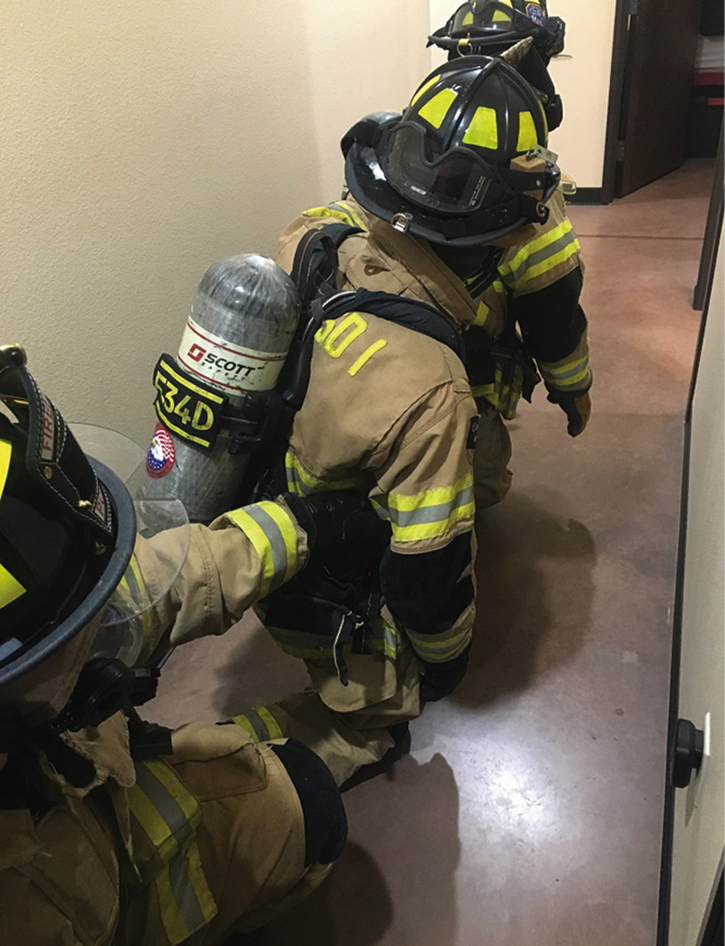 Note: If you are using any variation of a RIT bag, attach it to the down firefighter’s waist strap and then place it between the legs; gravity and friction will make the pack “trail” properly (photo 6).

It is important to practice fine motor skills as regular training. You must be able to secure this strap to the down firefighter with speed and accuracy. Practicing in blacked-out conditions with gloves is a common training method for many techniques. Mayday communication with personal radios blacked out is also encouraged as a part of this skill. Common practices advocate that, after the initial RIT has located the victim, a second RIT should enter to assist in movement. In extreme cases, a nearby hose team can assist in removing a down firefighter out of a hostile area until other help can arrive (photo 7). As seen in the photos, all that is now required is the RIT working in sequence to grab the next member’s harness/frame and begin exfiltration.

(6) A rapid intervention team (RIT) pack is secured between the down firefighter’s legs with the RIT strap looped through the SCBA waist strap. 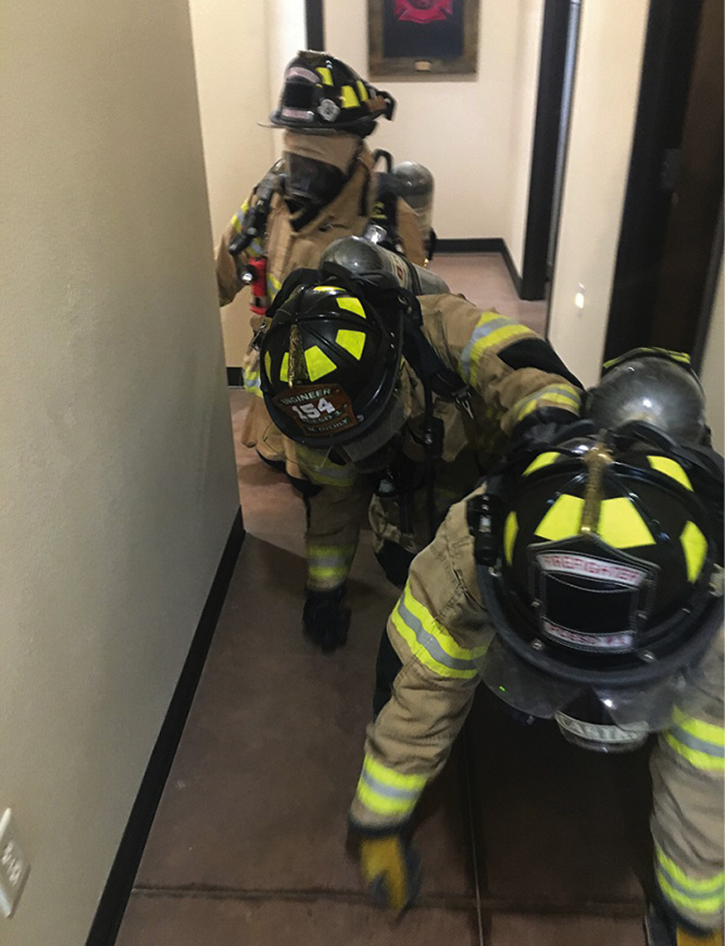 Note: All firefighters are in line with the direction of travel to the exfiltration point. All firefighters are below the thermal layer as well as any toxic gases. Rescuer 1 can also halt the “train” to check the victim, readjust his mask, or deal with any other issues that may arise during the removal.

When using the Mule Train, we are only limited by the amount of staffing available. We can adjust, add, or subtract given the space required. As you can see in the photos, anytime we add another firefighter to the Mule Train, this is a force multiplier.

I asked Jake Green (my son), a member of Texas Tech University’s engineering program, if there was any mathematical formula that represented moving objects over a surface with friction involved, such as carpet, burnt lumber, and so on. He recommended using the Kinetic Energy Formula: Fk = μk η (the force of kinetic friction = the coefficient of kinetic friction + normal force). Broken down, the formula simply states that, by adding another person, the friction decreases. The addition of another person more than doubles the force/horsepower, so each time you add someone, the effect multiplies. So, having four people pulling an object truly becomes “horsepower.” He also explained that velocity is affected by additional force—in other words, the more people involved, the faster this works.

So, now we can add some benefits to our “equation.” When moving through narrow areas, choke points such as doorways, or even corners, the Mule Train does not have to reposition (photo 8). Speed over ground is increased, there’s less RIT fatigue, and little time is wasted. As a side benefit, all members of the rescue party are facing the same direction of travel. This helps in negotiating obstacles and improves communication. Remember, when fatigue sets in, fine motor skills are affected. Fine motor skill degradation does not come into play because all that is required is grabbing and pulling in one direction. 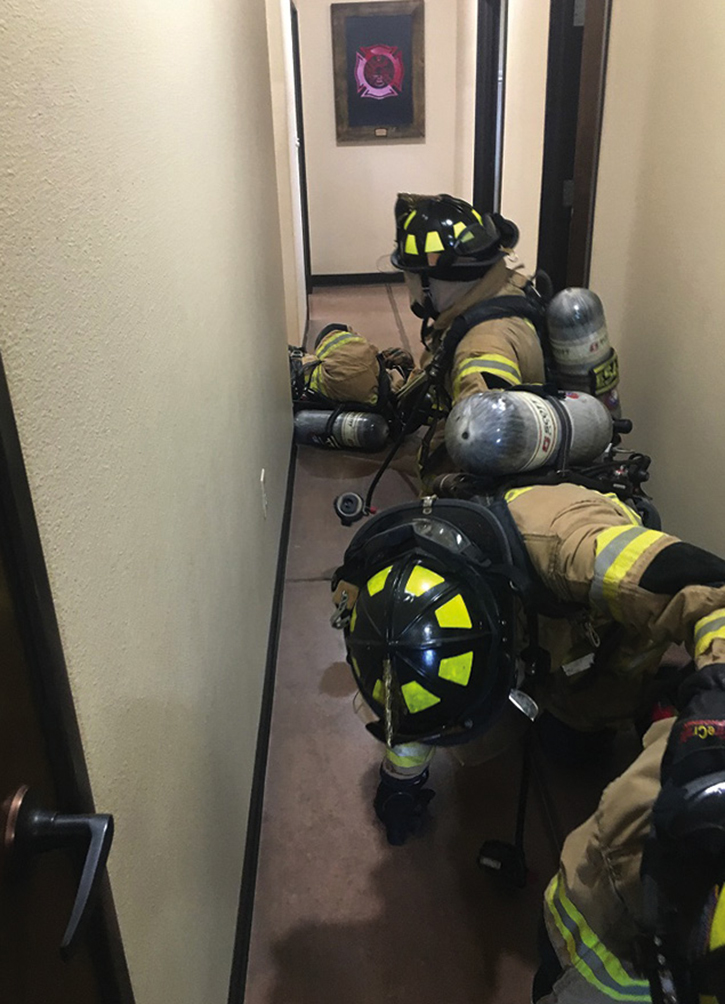 (8) The three-member Mule Train goes around the interior hallway corner in line.

For practice, we moved a firefighter weighing 250 pounds before donning full turnout gear and SCBA. Using the Mule Train, we were able to move the firefighter out of the structure with little additional training or direction.

This past fall at the Tarrant County (TX) College Fire Service Training Center campus, I took a group of six volunteers with only intro training levels into the tower to attempt this technique. I demonstrated and briefed them for two minutes on how to accomplish the task. By using the Mule Train while working in blacked-out masks, they were able to locate, drag, and remove to safety a 230-pound down firefighter across two rooms in less than 30 seconds.

In our Metroplex area, there are some cities that have adopted sending a technical rescue team to all second-alarm commercial building fires for RIT purposes. The combined staffing of eight people dragging a single down firefighter in a big box store is certainly justifiable.

The Mule Train is not intended to replace any current technique or practice that your department is already using. Consider this as it is intended—another tool in your toolbox.

STEPHEN GREEN is a 28-plus-year fire/emergency medical services veteran. He is a TCFP master firefighter, an instructor III-master, a former field training officer, and a former training officer. Green is also a captain at Station 37 with Parker County (TX) Emergency Services District 1 and the Texas Intrastate Fire Mutual Aid System coordinator. He is also an adjunct instructor for Tarrant County (TX) College at the Fire Service Training Center. Green was also added to the International Society of Fire Service Instructors’ Curriculum Development Committee for 2018.

Exposing an invisible killer: The dangers of carbon monoxide