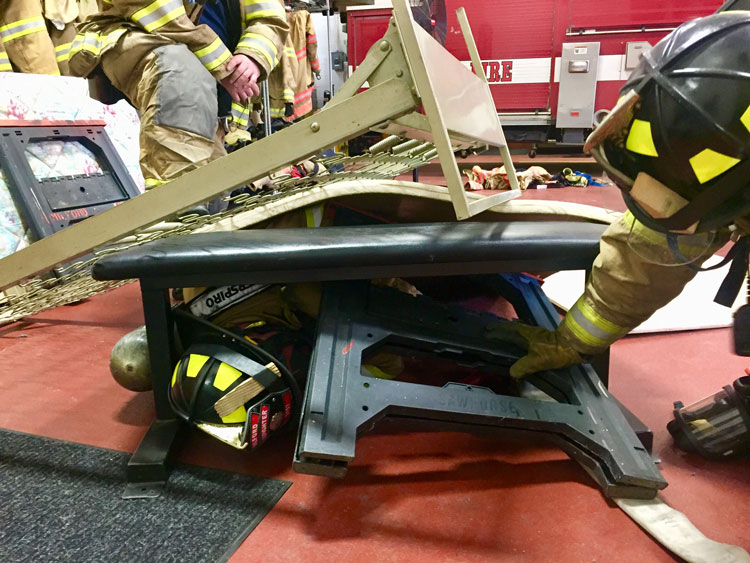 In the American fire service, it is essential that every member be a “jack of all trades and master of all.” Fire suppression, technical rescue, EMS, hazmat, etc.–the list of our roles and responsibilities continues to grow. We must stay in a constant state of readiness. At the start of our tour, firefighters must ensure we are prepared to perform any task that may present itself. With that said, the various tasks we perform have different shelf lives with respect to frequency of use. Some may be performed regularly, such as stretching a handline or disconnecting the battery of a vehicle. Other skills, such as those needed for high-angle rescue, may be used only once over the course of a member’s entire career. Whether it is a call your department runs daily or one you have never executed, the public doesn’t care. They are counting on us to get the job done. We must ensure a state of readiness to provide the highest level of service possible. I hate hearing “Oh, this is [Any Town, USA], it will never happen here.”  Remember Murphy’s Law–anything that can happen, will happen. It might not be today or tomorrow, but given enough time, it will happen.

Yet it’s not easy to achieve and maintain this full-spectrum dominance when it comes to fire service disciplines. The only way is through countless hours of quality training that will keep us proficient and able to conduct each operation to the highest standard.

RELATED: Walton: Mayday, Mayday, Mayday… | Your Ability to Call a Mayday Depends on How You Wear Your Radio | Mayday Monday: Moving a Down Firefighter Up Stairs |

The key word is “quality.” To ensure quality we must find ways of making training more realistic. For instance, searching a room without your mask blacked out isn’t the most effective training. When was the last time you performed a search without decreased visibility? There are always things we can do to make our drills more substantive and realistic.

We hope never hear the term “Mayday” on the fireground. If called, we instantly know one of our members is in serious trouble. Are we prepared to handle a Mayday? Simply checking our packs at the start of tour, knowing the location of buddy breathing connections, and ensuring the rapid intervention team (RIT) pack is on the truck doesn’t mean we are ready. Some departments train more than others, but does that mean are we truly prepared to handle what could potentially be the worst day of our career?

We often drill on Mayday operations in ideal conditions, such as on an open apparatus floor with quality lighting and no impediments or obstructions. We frequently review the RIT Pack, hooking up our buddy breathers, and removing a down firefighter, but again under ideal conditions. I’m not certain of statistics but I would venture to guess almost all Maydays called have not been under the most optimal settings. They were called because of zero visibility, high heat, debris from collapse, etc. If we respond to Maydays in less-than-optimal environments, than why not attempt to create similar conditions in which we anticipate to operate?

Collect random objects: Go around your firehouse and collect random large objects that may be laying around the station or in storage, such as old bed frames, wooden pallets, plywood, 2x8s. You can also use equipment from your apparatus, such as a roof ladder or section of large diameter hose. These objects may be accidentally damaged in the drill, so choose only those where damage is acceptable.

Find open space: Find an open area large enough to perform the drill. Pull apparatus out onto the front apron or find an open-grassed area if available. If you are outside on the grass and worried about getting your gear muddy, you could always throw a tarp down…. But I’m pretty sure you’ll survive without it.

Personal protective equipment (PPE): Have all members wear full PPE. That means bunker gear, helmet, hood, gloves, self-contained breathing apparatus (SCBA), and radio, exactly how it would be set up when working at an incident.

Mayday firefighter: Have one member in full PPE, on air, and with SCBA mask blacked out lay face down on the ground. 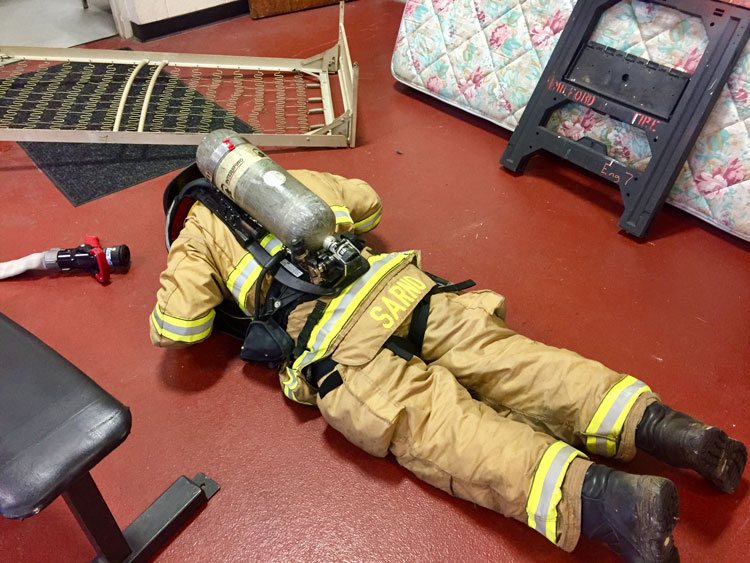 Prepare collapse pile: Cover the Mayday firefighter with random objects found around the firehouse. Place the objects accordingly, attempting to create a “mock ceiling collapse.” Make it it difficult to access critical parts of the body; i.e. head, pass alarm, buddy breather, universal air connection (UAC), etc. In this scenario, the Mayday firefighter is trapped from a post ceiling or roof collapse. 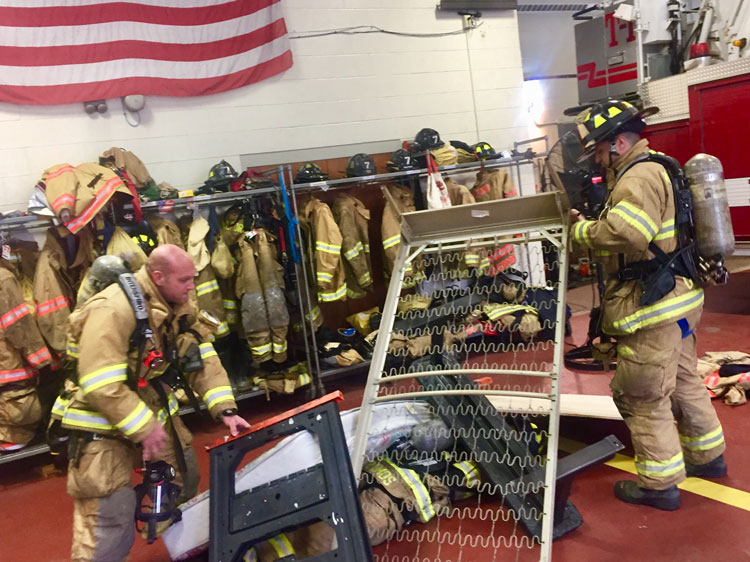 (4) Members covering the Mayday firefighter with large objects, placing them accordingly to create the collapse debris.

Apply pressure. Have one or two members place a foot on the objects covering the Mayday firefighter and apply slight pressure. The overall objective of this drill is to make our training more realistic. Attempt to make the Mayday firefighter feel a little uncomfortable. If caught in a collapse, one can only imagine that it would not be a pleasant experience. Have one member stay in constant contact with the Mayday firefighter to ensure they aren’t in any distress/discomfort or that the pressure/debris isn’t too strenuous. We are attempting to create “semi-uncomfortable conditions,” but the safety of our brothers and sisters is paramount and outweighs everything else.

(5) While applying pressure with his foot, this firefighter is also increasing the intensity of the drill by running the reciprocating saw (with no blade inserted) to act as an additional external stressor.

Make noise/create stressful environment: If your RIT were operating to free a down firefighter, fire operations must continue. Crews need to stay on task and carry out their assignment. If crews were to abandon their assigned task and begin searching for the Mayday firefighter without being assigned, it’s almost certain the situation would only get worse. Crews still need to put water on the fire, ventilate, and perform all the other vital functions required on the fireground. During the drill, have members create external stressors–run the chainsaw, run a positive-pressure ventilation fan, open a nozzle near the collapse pile. Creating external noise will add stress and prove to make the evolution more realistic.

Call the Mayday: Coordinate with dispatch and inform them you are training and will be calling Mayday over the radio. Depending upon your department’s standard operating procedures or guidelines, you may have to switch to a different channel or to “talk around.” Have the Mayday firefighter attempt to reach the “remote mic,” hit the emergency alert button and push to talk (PTT). Have them also reach for the portable radio and again hit the emergency alert (PTT) and see if they can operate the frequency selector knob. Have the Mayday firefighter call a Mayday. If pinned in the collapse pile, it should not be easy for them to move their arms and reach the mic or radio. For members who haven’t put much thought into how and why they wear their radio the way they do, this may be a perfect time for them to reflect and determine optimal positioning.

(6) On this day of drilling, we opted to have the rescue firefighter locate the Mayday firefighter by following a hoseline to the nozzle.

(7) The Rescue firefighter has gained access through a void space, located the Mayday firefighter’s buddy breather, and is making the connection.

Each evolution should provide a different experience, and feel free to adapt this drill to your company’s skill level. While performing this drill, some evolutions may go quick if void spaces happen to be closer to the buddy breather/UAC, whereas others may be prolonged due to positioning of the Mayday Firefighter, positioning of the collapse pile, or on account of other variables. Although it may be extremely frustrating at times, this drill is not meant to discourage members or create resentment. The purpose is to improve confidence, enhance abilities, and remind us of just how difficult making contact with and securing air on a firefighter trapped in a collapse would be. Reviewing and mastering the components of RIT and Mayday is a vital to firefighter survival. Taking our knowledge and equipment and creating a realistic yet stressful environment will prove to be most effective in preparing our members to perform the feet of rescuing a firefighter trapped in a collapse.

Adam J. Hansen is a lieutenant assigned to Engine 7 in the Milford (CT) Fire Department, where he has worked since 2006. He began his career as a volunteer in Branford, Connecticut, in 1999. Hansen has a BS degree in fire science (fire administration) and a minor in criminal justice from the University of New Haven. He is a nationally registered paramedic and is state-certified in fire service instructor 2, fire officer 2, incident safety officer, pump operator, and aerial operator and in rescue operations: trench.

Rescue on The Water

Forcible Entry: Sizing Up the Cylinder Is a Critical Step