Often, when we encounter security window bars or gates at low levels, it may be difficult to cut them when we’re hunched over while holding the saw. This is also true when we attempt to cut a vertical fence post at its lowest point when we are trying to get the apparatus into position in a fenced-in yard or a parking lot. Most firefighters will have to kneel down on both knees and hold the saw away from their body, with their hands and arms supporting the vibrating machine. All too often, this can be difficult and challenging for many firefighters if there are numerous bars to cut, they are at low level, or their body is in an awkward position. In addition, the saw is vibrating from the motor running, and we must apply pressure to the material being cut.

Fortunately, many saws manufactured today have carrying handles on just one side, and we are now able to get the saw closer to the ground as compared to saws of the past. Also, if you know your saw, you may be able to switch your blade and the guard’s position from an inboard to an outboard position, allowing you to cut low to the ground.

When we are cutting bars low to the ground, we can position ourselves in a manner that takes a lot of stress off our bodies. If we approach the object that’s being cut in a “one knee up” and “one knee down” position with the saw resting on the front of our boot, we’ll be supporting the saw with our boot and reducing the fatigue level on our arms and shoulders. Either boot can support the saw, but make sure you use whatever foot you feel most comfortable with in relation to which arm is holding the saw.

Simply lay the saw’s plastic motor housing on the front of your bunker boot. Make sure you don’t place the muffler or hot metal engine fins on your boot; those two items can burn through your boot, possibly destroying it and causing injury. Remember, you must use the “flat” side of the saw where the handle isn’t an obstruction and which would contact the ground. 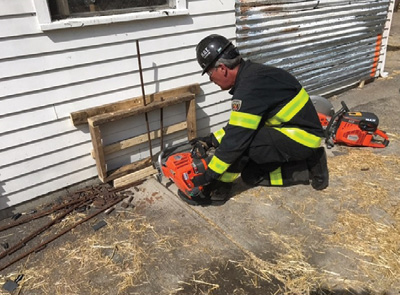 (1) When faced with low cutting operations, a firefighter can use his foot to help support the saw, which also takes some of the vibration off his arms while cutting. (Photos courtesy of author.)

Bring up the saw’s revolutions per minute (rpm) slowly and allow the blade to “bite into” and develop a groove in the metal being cut. Once the groove has started to form, pull in on the saw’s throttle trigger fully to bring the saw up to full rpm; maintain this speed while cutting through the metal bars. You can also support the saw in this position if you need to plunge cut through material such as wrought iron ballisters. While doing so, you may have to reposition the saw’s blade guard because of your foot support and to allow the blade to plunge through the material being cut.

If the material being cut is slightly elevated and doesn’t match the same height when the saw is simply resting on your boot, lift your toe upward and use your heel as a pivot point to gain the proper cutting level. When you perform this technique, the saw’s housing will at times come back and rest against the top of the ankle and the lower shin of your bunker boot; this helps carry the weight of the saw, taking stress off your body and supporting the saw throughout the cut. The bunker boot provides good protection to this area of the leg (which also may have shin protectors) as well as the bunker gear’s pant leg. In addition, the saw’s plastic housing that’s being supported won’t get too hot. Be careful not to place the saw only on the very tip of the boot; there isn’t enough surface area to support the saw, and it could vibrate off the metal during the cutting operation. Plus, if the saw is not fully on the tip of the boot, the saw can tilt and cause the blade to bind up during the cut. 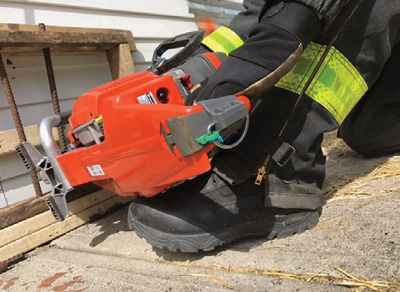 (2) The saw is placed onto the boot and supported. Do not place the muffler on the boot; it can cause damage or injury.

If you are cutting material that is a few inches wide, pivot the saw on your boot while slowly moving your arms (perform this maneuver slowly so the saw doesn’t fall off your boot). If you must make a longer, horizontal cut, pivot your heel on the ground and move your arms and upper body while supporting the saw to make the longer cut. In some instances, it will be necessary to pivot and twist as much as you can and then reposition to finish the cut. Don’t overstretch or overreach with a live saw; improper support of the saw can cause the blade to bind during the cut and possibly have a tooth break off a diamond blade or cause damage to an abrasive blade, cause the blade to pull out of the cut (and not fully cut the material), or cause the operator to drop the saw and have the saw blade “skip” on the material being cut. Any of those incidences could cause an injury to an operator or a firefighter near the cutting operations.

There have been instances where firefighters must make cuts at an even higher level while maintaining the one-knee-up and one-knee-down position. To perform this tactic, the firefighter places the saw’s housing on his knee, which, instead of his foot, balances and supports the saw during the cut. Another method to cut an object in position just off the ground is for the firefighter to flip the saw around and place the carrying handle on the ground, which will support the saw. The firefighter must hold the top portion of the saw handle and trigger the handle to operate the saw during the cut. He must also maintain constant control and support of the saw while it’s resting on the narrow handle; its small width can cause the saw to twist and bind up the blade during the cut. 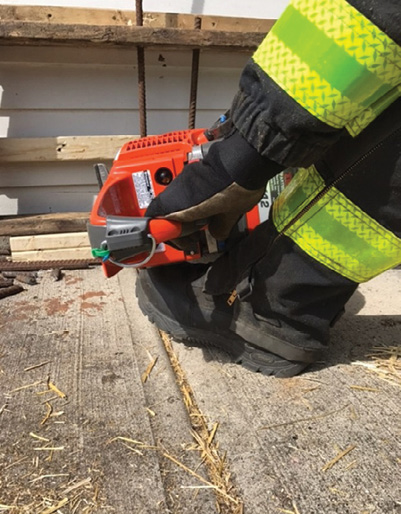 (3) Lifting the front of the boot will allow you to operate at different heights and help support the saw.

Supporting the saw with the boot or knee may seem basic to some, but to others who are not exposed to a lot of realistic training or fireground operations, it may be a new lesson or an improved or advanced skill set. As it is with any new tactic you haven’t performed prior to attempting it on the fireground, practice it first while drilling.

MICHAEL N. CIAMPO is a 32-year veteran of the fire service and a lieutenant in the Fire Department of New York. Previously, he served with the District of Columbia Fire Department. Ciampo has a bachelor’s degree in fire science from John Jay College of Criminal Justice in New York City. He is the lead instructor for the FDIC International Truck Essentials H.O.T. program. Ciampo wrote the Ladders and Ventilation chapters for Fire Engineering’s Handbook for Firefighter I and II (Fire Engineering, 2009) and the Bread and Butter Portable Ladders DVD and is featured in “Training Minutes” truck company videos on www.FireEngineering.com. He writes the back page column “On Fire” for Fire Engineering.