In multiple incidents, firefighters have become trapped in the floor during fires for various reasons. With the advent of lighter-weight construction using engineered wooden beams and oriented strand board materials, floors failing from fire exposure are a real possibility and a direct hazard. National Institute of Standards and Technology studies have shown unprotected flooring fails at different times depending on the construction materials used. Investigating a modern dwelling using lightweight construction, one often finds that there is no basement ceiling, which permits fire to spread laterally unchecked. In communities with older construction, the “balloon” frame is still present in residential and commercial occupancies; it also permits unrestricted fire spread.

The two similar incidents reviewed below will provide the ability to recognize a similar devastating event. The Rochester Drill that follows the reviews will enable you and your department to train and prepare for such events. Both incidents occurred on the first floor, resulting in the firefighter or firefighters becoming trapped between the basement and first floor. The entrapments varied, as did the means of removing the trapped firefighters.

Firefighter Trapped in the Floor: The Rochester Drill

In the Ebenezer Church fire and collapse in Pittsburgh, Pennsylvania (March 13, 2004), two firefighters, Richard Stefanakis and Battalion Chief Charles Brace, were killed and 29 others injured when the bell tower collapsed into the vestibule.

A second incident led to the development of the “Nance Drill,” named in memory of Columbus (OH) Fire Department Firefighter John Nance, who was lost on July 25, 1987. Nance died when he fell through a fire-weakened floor in a commercial occupancy into the basement. Multiple rescue attempts were made, but Nance succumbed to his injuries. Various methods have been developed throughout the fire service to rescue a firefighter who has fallen through a floor; this article will address rescuing a firefighter trapped in a failed floor.

On a clear Tennessee night in January 2007, the temperature was 40°F with the wind at five miles per hour (mph) from the south/southwest, when an incident commander (IC) arrived on the scene of a residential fire. He found a garage fire with fire showing from the C/D side of the basement. Units were dispatched at 0031 hours for fire coming from the wood stove in the basement of a two-story, single-family dwelling of ordinary construction. On completion of a 360° walk-around, from the basement entrance the IC observed fire extending through the floor into the first floor. The firefighter in this incident was part of a crew that had made entry and encountered a spongy floor; he then exited the structure to get a thermal imaging camera. He reentered the structure and was an arm’s length from the entry door when he fell through the compromised floor. The investigation found failure of the engineered wooden I-beam support systems.

In August 2006, it was a sunny 68°F afternoon in Wisconsin with the wind at seven mph out of the south when units were dispatched for the house fire. An ambulance crew was assigned to assist with the primary search initiated on the first floor. The crew initiated a left-hand search at a crawl because of limited visibility. While still within a few feet of the entry door, the crew heard a loud cracking noise and, subsequently, the firefighter fell through the floor into the basement. On investigation, the floor was found to have engineered wooden beams with lightweight parallel chord trusses that were two inches wide and four inches deep with gusset plate fasteners.

The Rochester Drill is designed for rescuing a firefighter who has become entrapped in a floor. 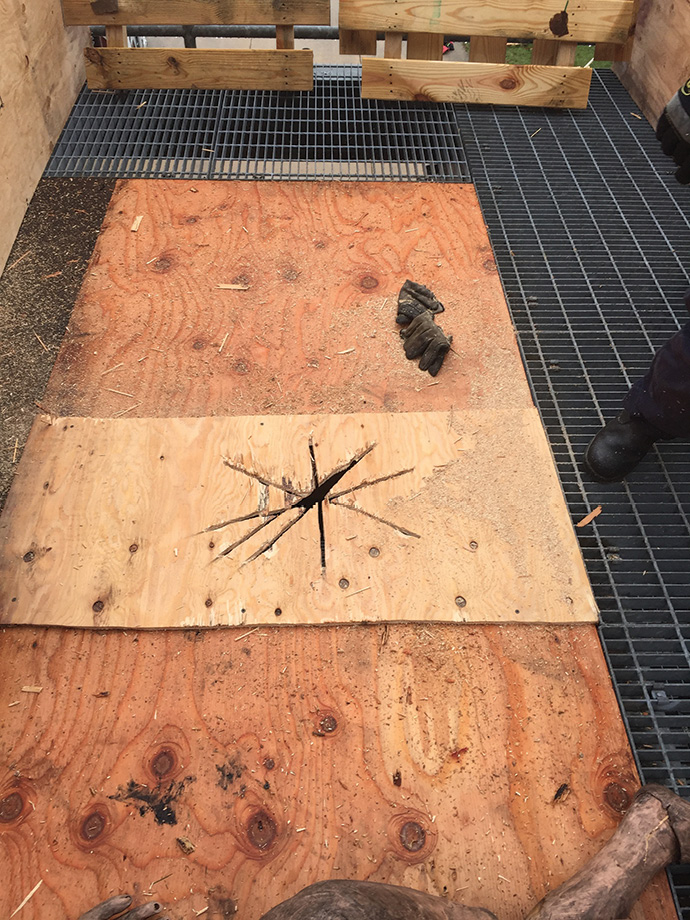 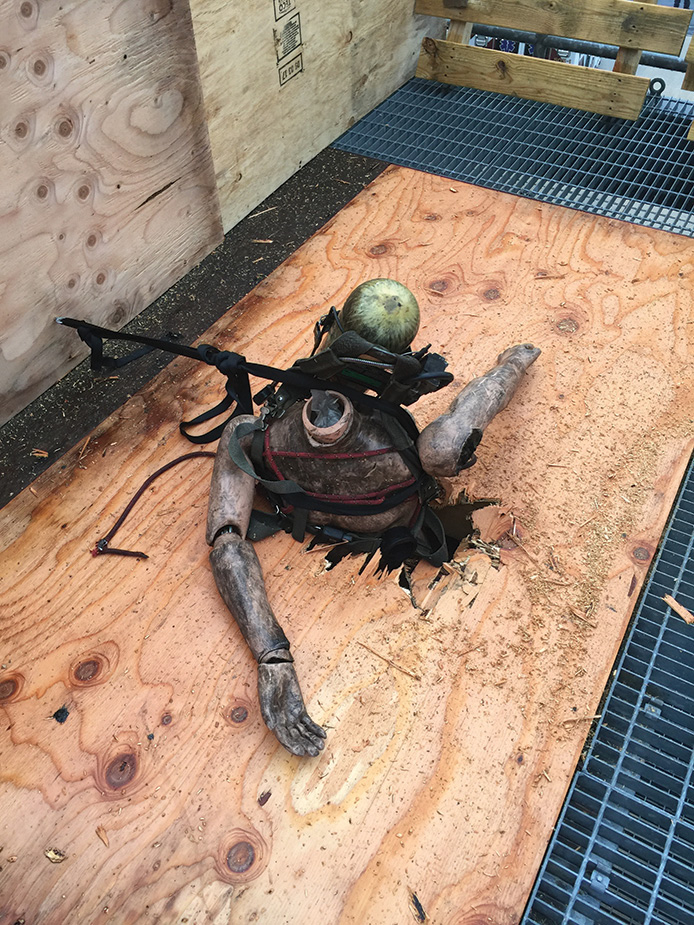 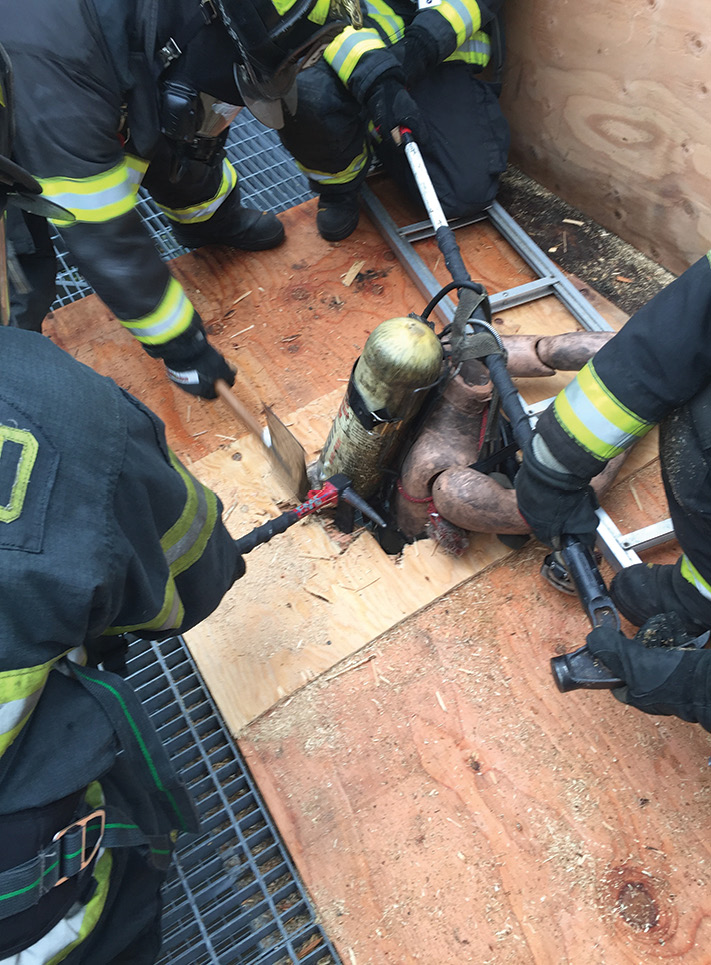 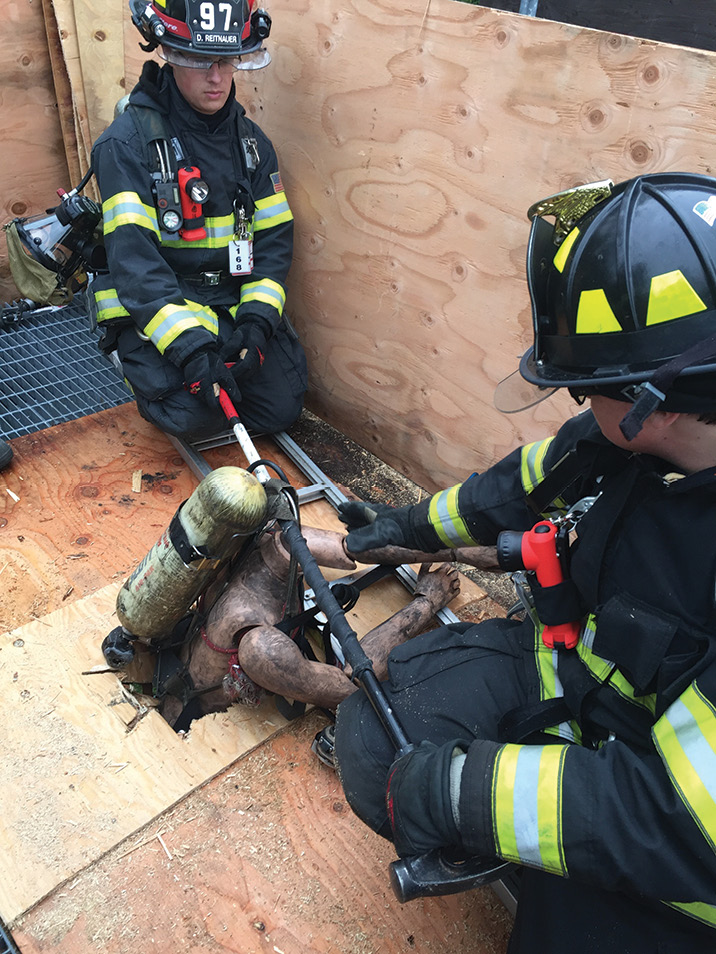 If the floor is severely weakened and is not tenable for multiple rescuers to use to approach, consider the following:

ROBERT J. FAAS JR. is a lieutenant with Montgomery (MD) County Fire Rescue, a member of Maryland Task Force 1 Urban Search and Rescue, the hazmat officer on the county’s Hazardous Incident Response Team, an officer for the county Technical Rescue Team, an instructor at the county’s Public Safety Training Academy, and an instructor for On Scene Training Associates, LLC.

DAVE GALLAGHER is a retired lieutenant from the Huber Heights (OH) Fire Division, where he served nearly 30 years; he served with other departments in the Dayton, Ohio, area. Gallagher is a national instructor for several organizations and is an Instructor II for the Massachusetts Firefighting Academy in the rapid intervention team and recruit programs.