Late in 2015, the Wilton (CT) Fire Department was deciding on how to enhance its in-house training capabilities. Our Health and Safety Committee looked around the house and found that nothing safety-wise was needed. At the same time, we were finalizing which type of bailout system (rope-and-hook combination) we would use. The system selected was tested in numerous ways by the Bail Out Committee and then examined by the Health and Safety Committee. All agreed that one system was the best suited for our department, and it was time to purchase it, train on it, and move forward. 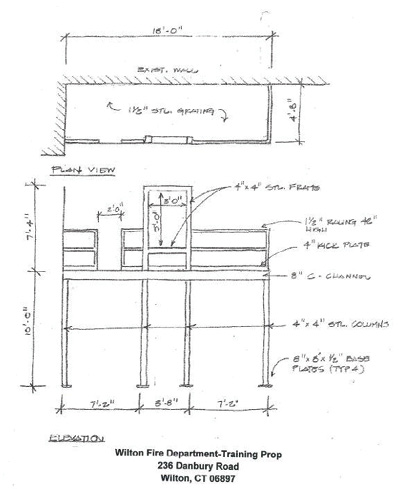 (1) My first drawing of the training prop. (Photos by author.)

For one week, we rented a mobile prop attached to a pull trailer that unfolded into a two-story building facade and placed it inside quarters. As our members got a feel for the new bailout system during the week, a few “real mechanical” guys and I looked at the trailer and discussed how we could build a similar permanent type of prop inside the firehouse. We looked at an unused corner of the house and discussed the many ways we could use this new prop. 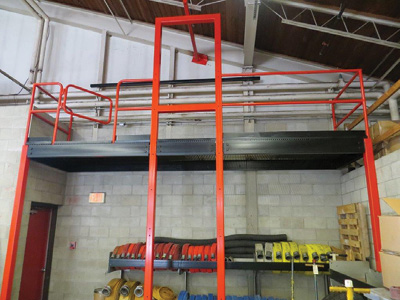 (2) We chose a corner of the firehouse that would place the training prop out of the way while we managed not to impede egress or impact our storage needs.

Our Concept and Its Construction

With pencil in hand, I sketched out an idea on a scrap of paper and showed it to the members, who then gave their own input, thus creating a potential concept. A week later, a design engineer visited the fire marshal to file a set of prints for a job he was doing at a local industrial facility. I took him to my office, showed him our prop concept, and asked him if he could refine the design and build the unit. He replied, “I can do this, but it won’t look exactly like this” (a clear jab at my artistic ability). I asked him if he had access to a steel fabrication contractor, and we were “off to the races.” 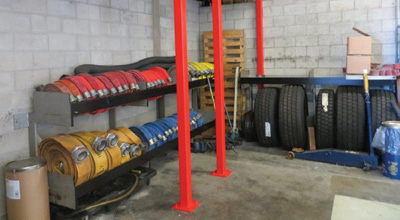 (3) Our permanent hose and spare tire racks remained during and after the construction of the prop.

As the design engineer drew up the real plans, I filed for a permit with my town’s building department. We issued a contract to the engineer, who then subcontracted to the steel fabrication company. The unit was up in two weeks; some of it was prefabricated at the company’s shop and some was done in place. 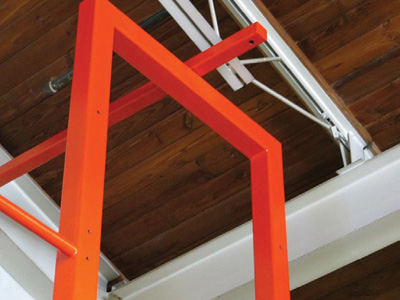 (4) We specified a welded bar attached to the window frame and the building frame for a belay system, adding an element of safety while training.

We then contracted a carpenter to do the wood and finishing work that included a robust windowsill and an easy system of replacing the wood framing on the inside of the window. We lined the window with wood so the hook could get a bite anywhere on the frame. This enabled us to easily change out the wood for fresh boards after the posted ones became chewed up. We also placed a few sheets of plywood on the steel grating to save bunker pants and the knees inside of them. Our fire marshal pointed out that the platform now impeded the ceiling sprinklers. As a result, we added two sprinkler heads under the platform, as required by code. We also placed a set of doors on the underside of the platform that can be opened to create a building facade (while training) and folded to allow access to storage under the platform. Last, we brought in painters to finish the project. Total construction time was 30 days, and the total cost of the project was $16,000. 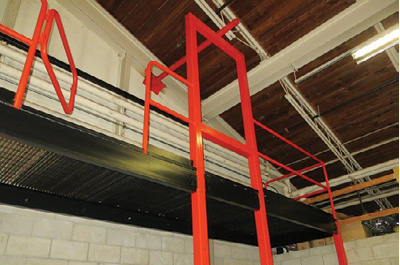 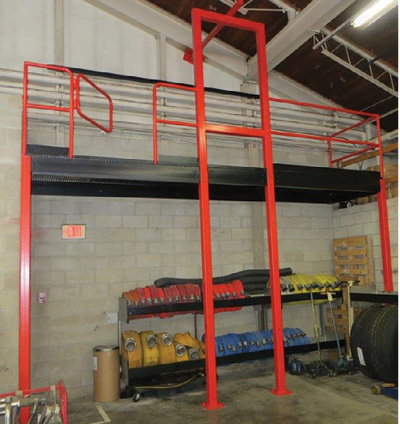 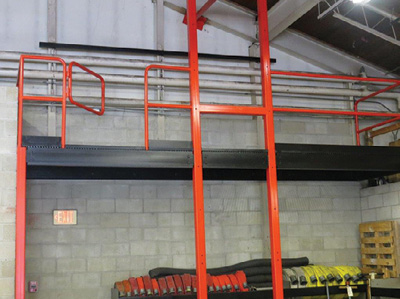 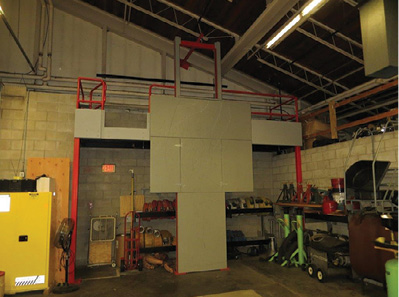 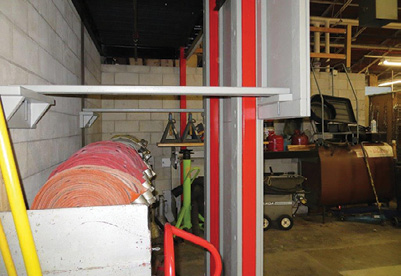 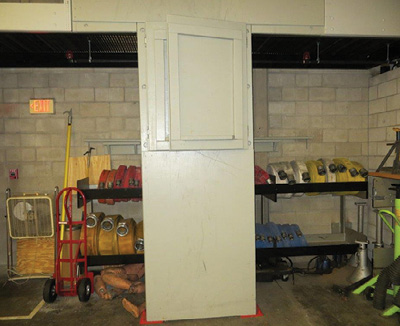 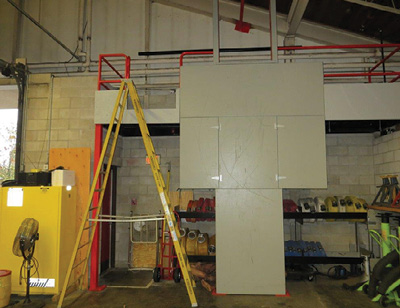 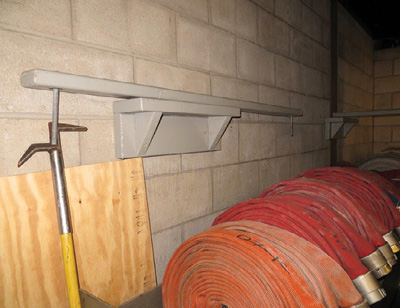 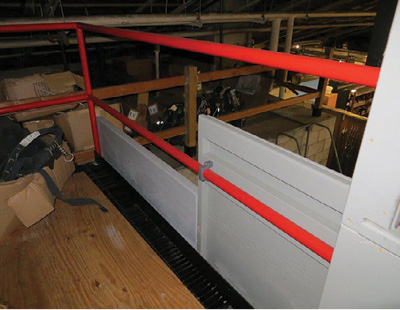 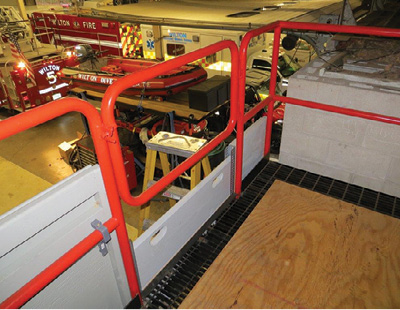 (5) Note that the overhanging belay bar is welded to the frame of the building as well as the top of the window frame, adding much stability. (6) The tires and related equipment belong to our apparatus mechanic. This prop had little to no impact on his operation. (7) A permanent ladder would have impacted the exit access to the door. We use a 10-foot A-frame ladder for training periods and tie it off to the platform. The gate closes and latches for safety, and there are “toe kick” plates on the edge. Note the black steel bar welded to the back wall for tying off and hauling. (8) The final product with all of the carpentry installed. (9) The doors fold in to allow access to storage. However, when they are open to create the building facade, they are braced to the wall with removable boards. (10) The doors fold over on each other to allow us access to our storage areas. (11) We place an A-frame ladder next to the prop and tie it off when it is in use. (12) The carpenters made shelves to store the braces when they are not in use so they don’t get misplaced. (13) The side opposite the entrance is permanently blocked to prevent slipping under the railing. (14) To add another level of safety, the entrance to the platform gets closed off with a portable slide-in board. If we place firefighters on their knees with a blacked-out mask searching for a window, this will prevent them from accidentally going over the side.

As the prop went up and was being completed, our firefighters did what they do best: devised about 20 additional uses for it. This was no longer just a bailout prop. One firefighter suggested that we weld another steel bar to the back wall for tying off loads, people, or a victim in a Stokes basket, and so on for rescue training. We also used the prop for laddering, window entry, lowering and raising equipment, hose hauling/lowering, and other “saving our own” exercises. As time passes, we will surely create newer and even better ways to make use of this important piece of equipment. 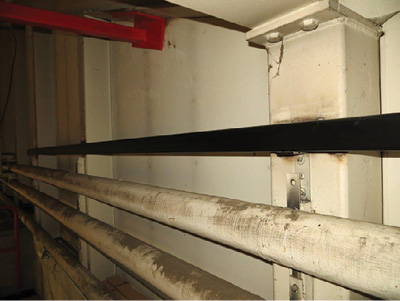 (15) The black steel bar was welded to the rear wall of the platform that is used for “tying off” exercises. o same.

It’s steel, it’s permanent, it’s solid, and it has multiple uses. In the harsh winters of southern New England, it affords our department 365 training days a year. On the coldest of days or during the deepest snowfalls, we can continue to train. Remember, training is the very foundation of your safety program, so make sure to train for life. 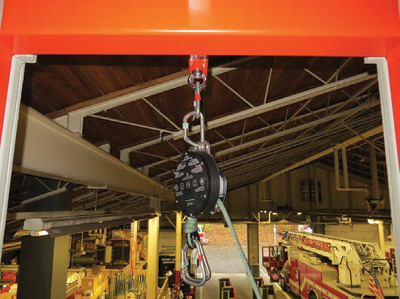 (16) We use a belay device in the interest of safety. The eye hook attached to the steel overhang is tested at 10,000 pounds. 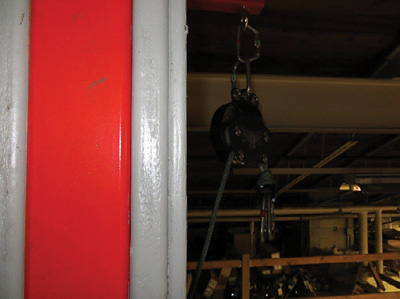 (17) There are two layers of plywood on the window frame. The top layer is easily removable with a screw gun to replace chewed-up pieces of framing. The layer of plywood attached to the steel frame is bolted to same.

RONALD E. KANTERMAN is the chief of the Wilton (CT) Fire Department and a 42-year veteran of the fire service. He has a B.A. degree in fire administration and two master’s degrees. He is a contributing author to Fire Engineering and FireEngineering.com and a coauthor for Fire Engineering’s Handbook for Firefighter I and II and the 7th edition of the Fire Chief’s Handbook.