As firefighters, most of us can identify with wanting to be on a select team, not just the “B” or scout team. If you sign up to join a volunteer fire department, there is at least some expectation that it will be physically demanding, enthralling, and life affirming and bring you some type of personal change that you’ve been seeking.

Those who sign up to be on a volunteer fire department want to be a part of something bigger. This typically involves wanting to be a part of a group—a fraternity, if you will. Perhaps they had role-model relatives or friends who were or are members or who outright encouraged membership based on their positive experiences as volunteer firefighters. In any case, being a firefighter is a calling that takes you to a “next-level” experience, if you accept it. 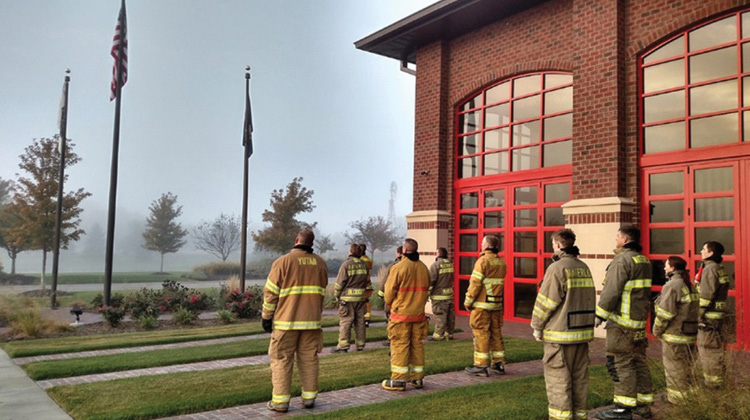 (1) Candidates recite the Pledge of Allegiance daily at the beginning of class. (Photos by author.)

As the years go by and leadership changes, the previous model’s processes are often intermingled, depending on who is in charge and how badly new members are needed. For recruit members involved in a process such as those in the three previous examples, there is typically dissatisfaction on the part of the probationary members, the department, and the members’ families. None of those models contain acceptance, indoctrination, and baseline expected certification training. In many cases, it takes three to five years for a volunteer firefighter to gain all three. This is a long time to wait and, frequently, results in attrition of new members. More than anything, new members are disillusioned by being undertrained and underused. It results in new members leaving for something more connected and fulfilling, with higher expectations and faster results.

The fire department is left with a partial member until he is accepted, indoctrinated, and trained to some certification-based level that is acceptable to the other members and citizens. The citizens are paying for and supporting the operation, and they expect certified, capable, high-performance teams of experts to show up and solve their problem when they call 911, whether paid or not. They have a right to some expectations. Being firefighters and members of an elite team, most of us want to meet or exceed public expectations and are constantly striving to do so.

Fire departments spend in the range of $8,000-10,000 to outfit, equip, and train each new volunteer member. So, how do volunteer fire departments get better, faster, performance results from new members while leaving that new member with a sense of intense belonging, accomplishment, and connection? The solution contained within doesn’t come easy. 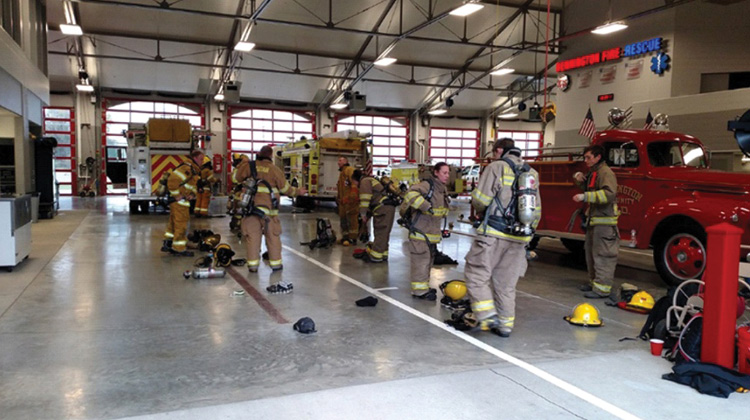 (2) Recruits drill on donning personal protective equipment, first for accuracy, then for time.

An Opportunity for Change

Over many years as a part-time state fire instructor, volunteer fire officer, and career firefighter and instructor, I was brought into the paradigm of being kinder and gentler to the volunteer firefighter rookies. After all, they are precious, and we don’t want to lose them. They are generally in short supply. What this resulted in was a generation of “mashed potatoes”: low expectation, poor performing, half-committed, undertrained members. Meanwhile, senior members complained about declining membership and the lack of adequate numbers of trained personnel. I never believed this narrative myself, but I have been constantly bombarded with it, even to this day. For years, I was looking for a way to break that cycle of self-defeat.

Rapid Reps at the Recruit Academy

The Fire Academy Instructor: Characteristics of a Good Educator

Then, along came my position in the training division of a large metropolitan fire department. In this position, running the career firefighter academy, my fellow team members and I saw signs of the same affliction and mindset in our career members: low performance, dissatisfaction, lack of indoctrination and acceptance, and even some attrition. We had high expectations, but we weren’t delivering courses that were highly physically and technically challenging.

It was our team’s chance to change the outcome. We immediately set out to return to highly challenging daily physical expectations of years past but with more science behind the controlled chaos and a connection to high-level firefighting skills, team mindset, and mental fortitude development. We didn’t make training and certification easier; we made it harder. We took a Navy Seal approach to changing physical aspects of the academy and, as a result, the internal survival beliefs of each recruit firefighter.

It worked. The results were relatively quick and sustained over a three-year period, with more than 100 new career members trained to the new expectations. The satisfaction among the recruits was high as well as the field training officers who received these candidates following the academy.

While looking for a way to transfer this success to volunteer firefighter certification courses, I came up with a general methodology that has been successful: the “volunteer academy.” This volunteer academy has reduced attrition, sped up adoption of department culture, developed members into street-ready and trustworthy certified firefighters much sooner than traditional models, and filtered applicants who were not ready to be fully involved. The process involves the following steps: 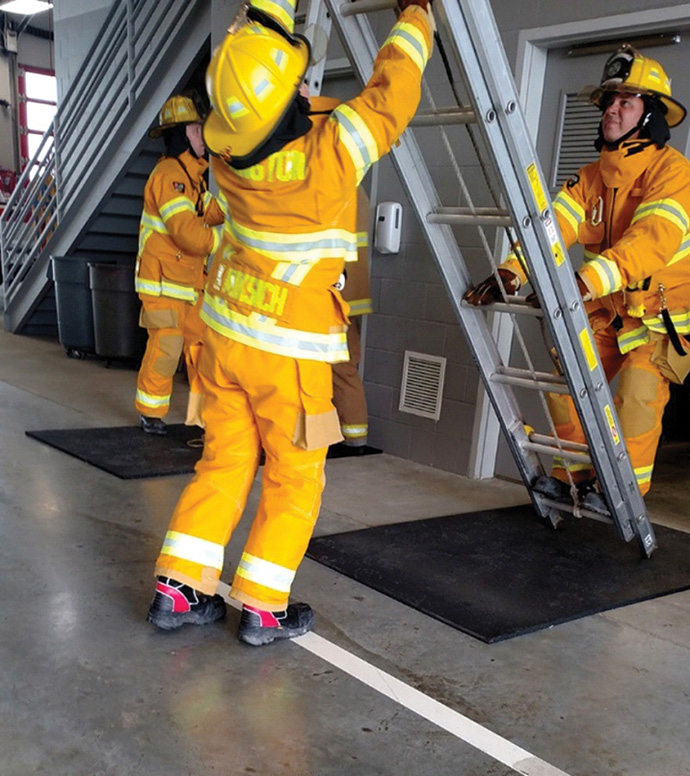 (3) Seventy percent of the class time should be hands-on skills practice.

Your goal is to appear as though you use this academy process every time. Avoid letting anyone feel that this is the first time you have done it. Also avoid letting any current members get in the heads of the rookies. Avoid letting current members start training rookies. If rookies have previous training, let them know that this represents a fresh start with new rules and that they are to participate fully with the instructor or risk removal from class. If they question procedures because they learned differently in previous training, they can address it with the instructor/staff respectfully following class.

Don’t be afraid to let go people who aren’t ready to fully commit. If they have a valid reason, other than just something that can be coached away, focus on the ones who stay. Build a select team, not a “junior varsity” one. With the volunteer academy approach, I have lost 10 percent of the recruits within the first two weeks, but then I seldom lose another. This is a good thing; those 10 percent are likely preoccupied with life-consuming priorities that will prevent them from being successful, and they know it. Practically speaking, this is usually before you have spent a lot of money on new fitted PPE and other expensive items for them.

In comparison to the old method of teaching firefighter certification courses in a less demanding, presentation-heavy class, without tough expectations and behaviors, over a four-to six–month period, the results are faster, better, and more satisfying for all involved. With the old method, the attrition rate during a Firefighter I class was often as high as 30 to 35 percent.

The benefit to the department and the taxpayers comes in the form of return on investment. Within four months of their start date, recruit members are certified to Firefighter I, Hazardous Materials Operations, NIMS 700, and BLS per National Fire Protection (NFPA) 1001, Standard for Fire Fighter Professional Qualifications. With supervision, they will become very useful on scene within a short time. It is short and intense, and the department will have most of the answers it needs about the probationary member. At this point, the newly certified members can begin responding to calls. It is the “carrot and the stick” method—no calls until certified. Again, this is a hard and fast rule to experience success.

Last, throw a graduation party. The intensity of the experience at an academy is celebrated by a graduation party where family and friends can share in the success of their loved ones. A graduation party facilitates the buy-in of the members’ families to the sacrifices that they have made and will make for years to come.

In academy-style firefighter training, students not only are introduced to NFPA standards, objectives, and job performance requirements but also the concepts of honor, pride, and commitment are instilled and constantly evaluated. The mind and body are trained to work together to perform essential firefighter skills without fail. The results are brotherhood, respect for rank and seniority, excellent skill performance, and a high level of commitment to the department. It’s not just a class; it’s an experience.

DAN MILLER is a 37-year fire service veteran and the chief of the Columbus (NE) Fire Department. He was previously a battalion chief (ret.) and academy commander for the Omaha (NE) Fire Department. Miller also retired as a part-time instructor for the Nebraska State Fire Marshal Training Division. He is CEO of Training Under Fire, LLC.

Drill of the Week: Incident Scenario: Car Vs House