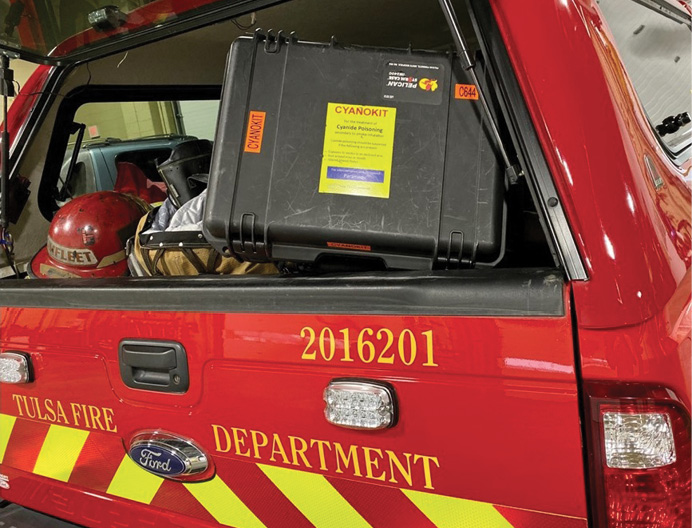 A “routine” house fire on New Year’s Eve 2011 would forever change the way the Tulsa (OK) Fire Department (TFD) operates at structure fires. Interior operations were ongoing when, suddenly, a Mayday call rang out over the radio. One of our own was in trouble. Shortly after the call for help, the lifeless body of Firefighter James O’Neal was pulled from the structure. O’Neal, a firefighter on Engine 19, was serving as a member of the fire attack group. Immediately on hearing the Mayday call, crew members of Engine 24 and Ladder 24 rushed into the structure to perform firefighter rescue.

Training for Change: Saving Lives on the Front End

During fire attack, O’Neal’s self-contained breathing apparatus (SCBA) mask became dislodged. His lungs filled with toxic fire smoke quickly, causing disorientation. He soon collapsed inside the burning home. After being rescued from the structure, O’Neal’s lack of breathing as well as the soot covering his face left little doubt that he had inhaled poisonous smoke. Oxygen deprivation and exposure to toxins had rapidly led to cardiac arrest.

TFD emergency medical technicians and paramedics provided basic and advanced life support quickly on their brother, who now lay on the front lawn. They initiated cardiopulmonary resuscitation and inserted an advanced airway. This aggressive care resulted in a return of spontaneous circulation. 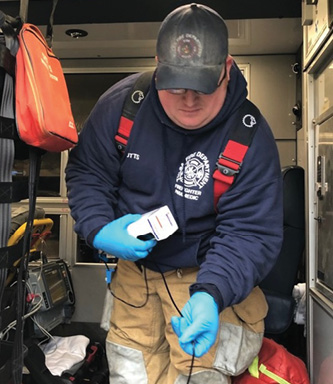 (2) Two Cyanokits are carried in each of the TFD’s district chief vehicles. 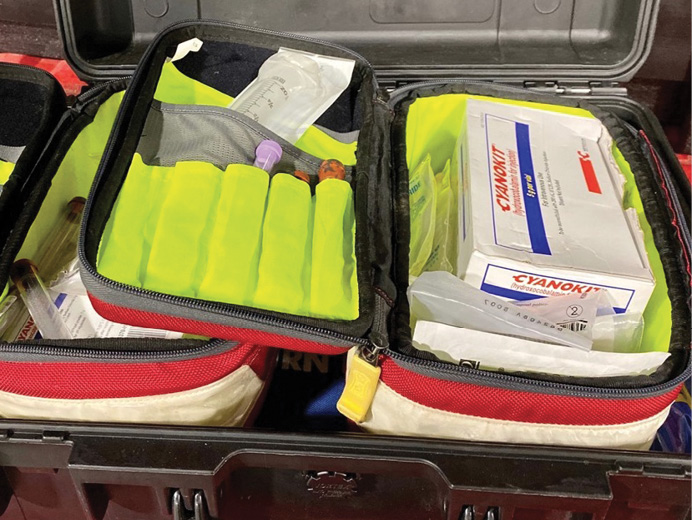 (3) The contents of the TFD’s Cyanokits.

Cyanokit® was administered on arrival at the emergency department. After a short stay in the intensive care unit and several weeks off the job, O’Neal returned to full duty. Fortunately, this frightening story had a happy ending, but not all who encounter this deadly enemy are as fortunate.

The presence of the deadly gas carbon monoxide (CO) has been preached to firefighters for years. However, there is an often-overlooked toxin, hydrogen cyanide (HCN), produced during the incomplete combustion of natural materials such as paper, wool, cotton, and silk. Synthetics such as plastics and polyurethane, now ubiquitous in modern construction and furnishings, also release HCN as they burn. Firefighters have the potential for HCN exposure at virtually every fire. Structure fires tend to confine HCN and other toxic gases, preventing them from escaping into the atmosphere.

HCN is a quick-acting poison that prevents the body’s tissues from using oxygen. Signs and symptoms of HCN inhalation can present within seconds, and death can follow within a few minutes. The ability to produce adenosine triphosphate is blocked, a phenomenon that, unlike CO poisoning, leads to very early onset of metabolic acidosis from anaerobic metabolism. HCN affects the central nervous system and can result in respiratory paralysis. Cardiac irregularities are common.

Exposure to CO and HCN share similar signs and symptoms. It can be very difficult—often impossible—to differentiate between CO and HCN exposure in the field. Suspect HCN poisoning in victims exposed to smoke within an enclosed structure and who exhibit altered mental status with soot in and around their airway. Firefighters should limit exposure by wearing personal protective equipment (PPE). Firefighters must wear SCBA anytime smoke is present. In the event of respiratory exposure to HCN, administer the antidote hydroxocobalamin (Cyanokit®).

The HCN antidote hydroxocobalamin is a form of Vitamin B12. It binds to HCN, creating cyanocobalamin, which restores the ability of the body to use oxygen (aerobic metabolism). Unfortunately, blood tests that rapidly confirm HCN exposure are not available. Emergency medical services (EMS) and hospital clinicians must be alert to the dangers of fire smoke and be aware of the presentation of HCN poisoning. The decision to treat for HCN poisoning is empiric and depends on the patient’s history, signs, and symptoms. You should suspect HCN poisoning if the patient was exposed to smoke in an enclosed area; has soot in his mouth, nose, or airway; and exhibits altered mental status. Signs of altered mental status may manifest as confusion or disorientation and are not restricted to unconsciousness. 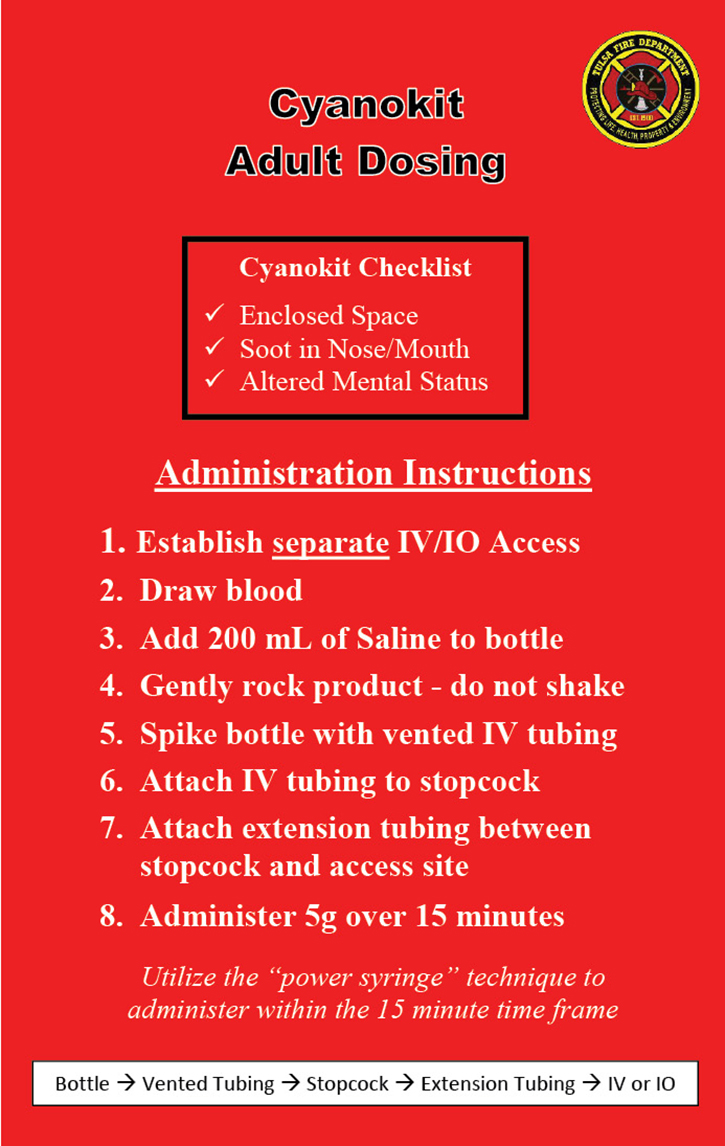 (4) The TFD’s Adult Dosing card in its Cyanokit instructions. 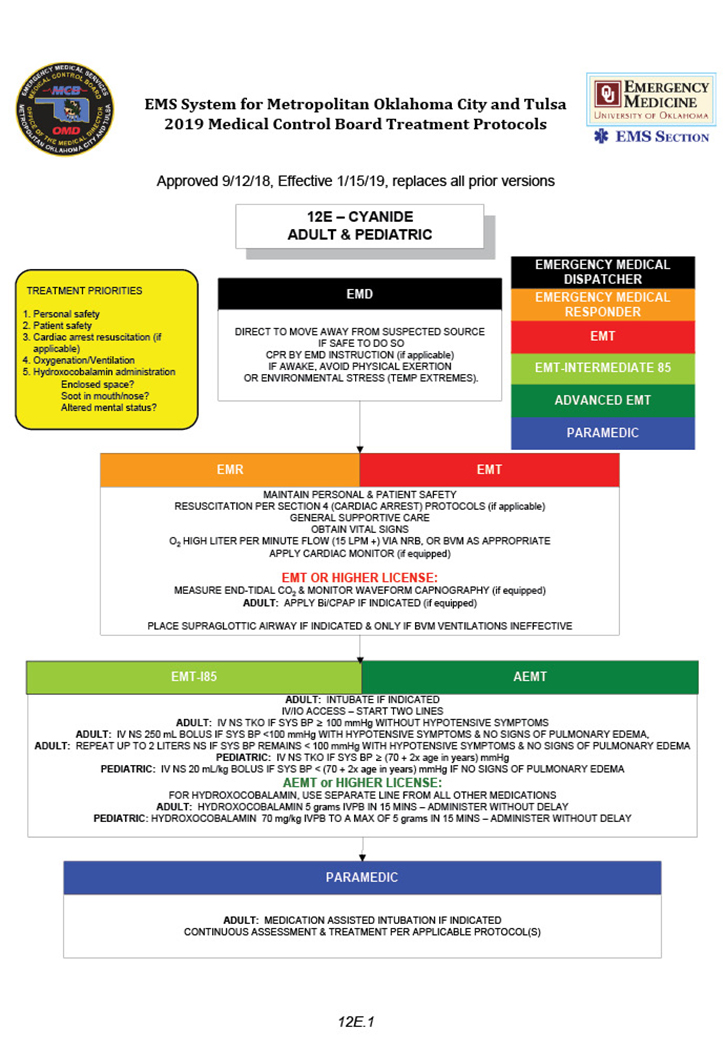 Unfortunately, Cyanokit was not an option in our system at the time of O’Neal’s tragic incident. However, the event on that cold winter night was the catalyst for the TFD’s development of its Cyanokit Program. In 2013, the Medical Control Board providing medical oversight for metropolitan Oklahoma City and Tulsa released an entire protocol section dedicated to fireground-related response. Included in this new section was a protocol for the treatment of HCN exposure and the administration of Cyanokit.

Administration of Cyanokit became a standing order for adults exposed to smoke in a confined space and presenting with altered mental status and soot in the nose and/or mouth. The original protocol required medical control consult to request orders for administration in pediatric patients. More recent updates no longer require online medical control for Cyanokit administration in pediatric patients. This update allows our providers to initiate the treatment without delay.

In May 2013, the TFD purchased its first Cyanokits. The TFD assembled a kit with additional supplies needed to allow rapid administration whenever indicated. In addition to the Cyanokit itself, the TFD added two 100-milliliter (mL) bags of normal saline, an array of vacutainers, a three-way stopcock, a 30 mL syringe, an intravenous tubing extension set, an 18-gauge needle, and an instruction set.

TFD EMS educators then trained each of the department’s 100-plus paramedics in the recognition of HCN poisoning and the proper administration of the medication. One kit was placed on each of the five district chief and EMS operations supervisor vehicles. Distributing the kits this way ensured that at least one kit would be accessible quickly at every structure fire. In total, six kits were made available for our citizens and firefighters, if necessary. The first Cyanokit was successfully administered within one month of being placed in the field. In this case, crews achieved return of spontaneous circulation in an elderly female who was rescued from a residential structure fire. 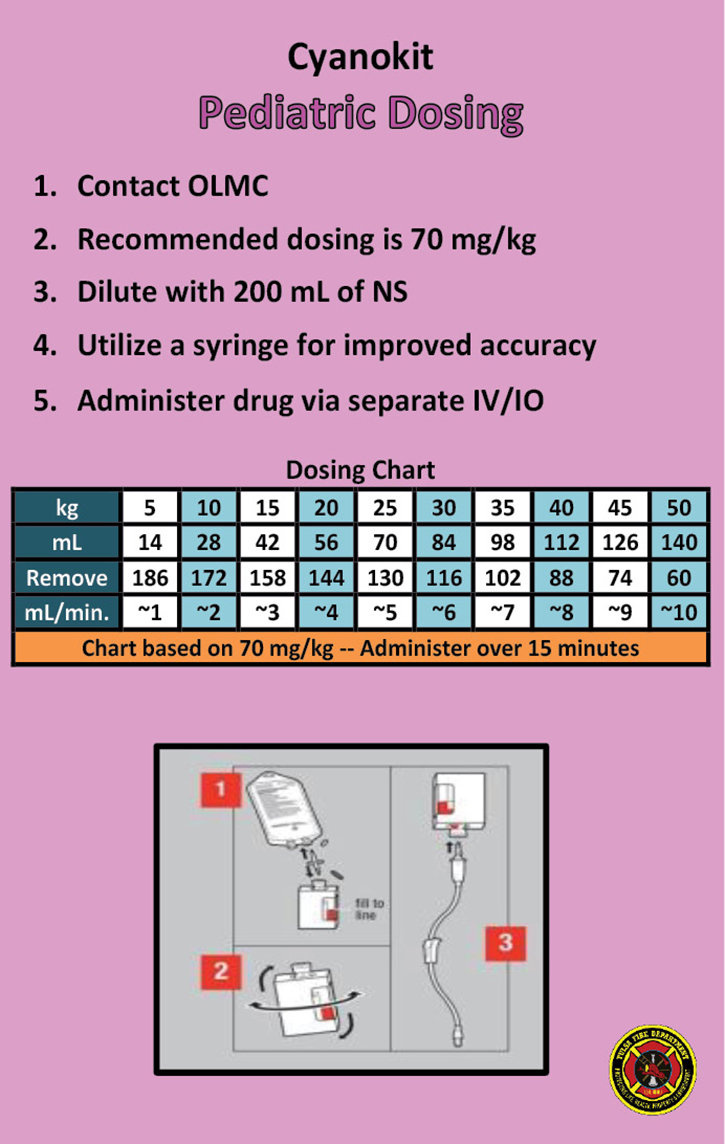 In November 2013, Cyanokit was administered to the first pediatric patient in our system. An 18-month-old female had been rescued from an apartment fire. Administration in the adult patient is straightforward: You give the full five-gram dose over 15 minutes. We found that pediatric administration was not quite as simple. First, orders had to be received from online medical control; Cyanokit was new in our system at this time, so communication was key during the consult. Once we received orders, we realized that correct dosing was going to require some math! Per our protocol, the pediatric dose is 70 milligrams per kilograms over 15 minutes. Since five grams of the drug is reconstituted with 200 mL of normal saline, two TFD paramedics put their heads together, performed the necessary calculations, and determined the correct dose. This incident led to the creation of a Pediatric Dosing card to be included with our kits. This card includes the precalculated dosage based on pediatric weight ranges. This card increased the confidence of our medics and eliminated unnecessary delay. The Medical Control Board recently updated the HCN poisoning protocol to make pediatric administration a standing order, allowing earlier medication administration.

A couple of years after incorporating Cyanokit into our system, the TFD discovered that one kit per fire scene is not always enough. In February 2015, a house fire was reported in the late morning hours on Tulsa’s west side. Crews ultimately rescued two adults and three children from this seemingly “routine” house fire. Within a matter of minutes, firefighters were conducting five separate resuscitations. Three of the patients received Cyanokit, including an adult female who was in cardiac arrest at the time of rescue. The swift rescue, coordinated fireground resuscitation, and availability of Cyanokit led to positive outcomes for all the victims. The female found in cardiac arrest walked out of the hospital just three days later! In response to this fireground mass-casualty incident, the TFD doubled the number of kits carried within the city. Each district chief and the EMS operations supervisor now carry two kits.

Since deploying the medication in 2013, TFD paramedics have administered Cyanokit to 20 civilian fire victims. The deployment of this life-saving medication has revolutionized the treatment of fireground EMS care. TFD paramedics continue to enhance their training on fireground-related injuries and stand ready to provide this life-saving treatment in any future events, whether it is to a civilian or firefighter.

Fire smoke is increasingly more toxic than it once was, and our realization of the dangers of fire smoke continue to evolve. In addition to CO, the deadly toxin known as HCN is present in nearly every fire. HCN seems to present greater danger within the confines of a structure. Firefighters must wear full PPE including their SCBA anytime smoke is present; there should be no exceptions. Be prepared to recognize and treat HCN poisoning in the population we serve who lack the benefits of PPE. We must also be prepared to treat our fellow firefighters if they find themselves in a predicament like that experienced by Firefighter O’Neal.

JOE SHERRELL is a 13-year member of and a captain and an emergency medical services officer for the Tulsa (OK) Fire Department (TFD). He also served five years as a paramedic and field training officer with the Emergency Medical Services Authority in Tulsa. Sherrell is an adjunct professor for the Fire and Emergency Medical Services Program at Tulsa Community College. He has a bachelor’s of science degree in fire protection and safety engineering technology from Oklahoma State University. Sherrell is also a member of the TFD and state of Oklahoma Incident Management Teams and a paramedic on Tulsa’s Community Response Team. In 2019, he was recognized by the National Alliance on Mental Illness for his work in the area of mental health.