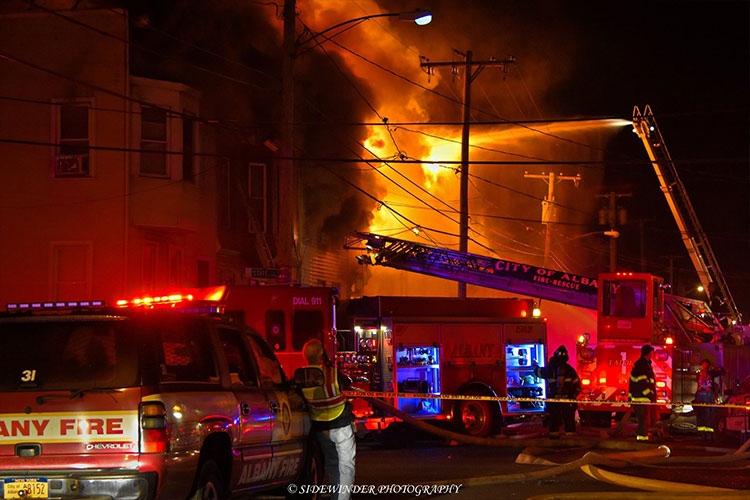 Firefighters in the city of Albany, New York, responded Sunday to two fire that destroyed more than a dozen buildings. Sidewinder Photography offered some photos from the scene as well as details from the response.

Just before 3:15 a.m., the city of Albany was toned out for an alarm of fire at 334 Sheridan Avenue. Engine 2 who was on the street stated over the air they had a large column of smoke showing in the distance. Rescue 1 was the first-arriving unit on scene along with E2 and found heavy fire blowing out of the structure. There were major exposure issues on all sides.

Firefighters checked with neighbors on scene and made sure everyone was out of the house. Firefighters pulled multiple handlines to make an aggressive interior attack inside but were repelled by extreme heat and smoke. A second alarm was declared as exposure on the B side was heavily involved. Crews had major overhead issues with power lines and power lines attached to the building arcing.

Four buildings were heavily involved within minutes. Firefighters switched to a defensive operation as the fire rapidly spread down the street to one house after another. Firefighters pulled multiple blitz fire monitors used the deck guns from the engines and operated with multiple hand lines along with using multiple aerial master streams to try to bring the fire under control. As they did so, they resumed interior operations, finding heavy fire in the cockloft.

As firefighters continued to knock down the remaining fire about two hours into the scene, multiple calls came in for 176 Quail St. for a reported row house on fire. Rescue 9 was first arriving on scene  and had heavy fire pushing from multiple buildings. Mutual aid was provided by the cities of Watervliet and Troy.

The heavy fire and smoke could be seen as far away as the city of Troy in the clear night sky.

As firefighters conducted a 360º check of the fire buildings, they discovered the back of the houses were heavily involved. Firefighters made an aggressive interior attack but were pulled because of deteriorating conditions. Crews from the previous incident reported to the scene. As exhausted firefighters continued to battle the fire, the morning sun exposed truly how bad the scene was. By 7:30 a.m., Firefighters were still battling heavy fire conditions in 172, 170, and 168 Quail Street. Firefighters continued to use master streams and hand lines until the late hours of the morning and were able to bring the fire under control by the early afternoon.

A total of 14 buildings were destroyed. No injuries were reported, and the two row house fires are currently being investigated by the city of Albany and the New York state department of homeland security office of fire prevention and control.

Read the entirety of the report and see more pictures HERE.