Firefighters from the City of Allentown (PA) were wrapping up from a house fire in the 100 Block of North Poplar Street when the 911 Center advised of a reported structure fire.

Engines 14, 13, and 11 were dispatched initially to the reported structure fire at 739 Tilghman St Rear. The battalion chief reported that Engine 6 and 10 and Truck 2 would be available for the second assignment. The modified box for the assignment included Battalion 43, Engines 6, 10, 14, Truck 2, and Engine 11 as the RIT company.

Units responded were advised that police were reporting fire showing. Engine 6 arrived and the crew went to work stretching an attack line. Battalion Chief Phil Atiyeh arrived on scene, took command, and reported a two-story garage well off. Engine 10 was ordered to assist the driver of Engine 6 with hand-jacking a supply line to a nearby hydrant while crews went to work.

The Truck 2 crew arrived on scene and assisted with deploying a second attack line. Engine 14 was ordered to come in from a nearby alley and assist with fire suppression and gaining access through the garage door. Crews made a quick hit and were able to have the fire knocked down within 15 minutes.

Firefighters remained on scene for a few hours mopping up and assisting the fire marshal. The apartment house on the property is still marked unfit for habitation following a spring 2018 fire that gutted the third floor. 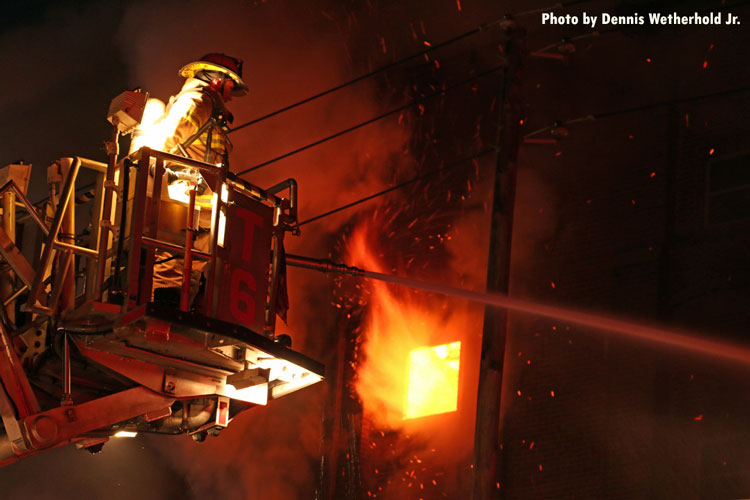 Allentown (PA) firefighters were dispatched around 6 p.m. on Sunday, October 7, 2018, to a reported structure fire at Franklin and Warren Streets.

Dispatched on the initial alarm were Battalion Chief 43 (Williams), Engines 4, 9, 10, Truck 2, and Engine 6 for RIT. BC 43 radioed the 911 Center and advised of smoke showing while still responding to the call. Chief Williams reported a working fire. Upon arrival, Chief Williams confirmed a working fire with flames showing. He reported that this would be a defensive attack and all units would be going in service with big lines.

Chief Williams then struck the second alarm and requested two mutual aid ladder trucks above the second alarm. A third alarm was struck within minutes of arrival, bringing in the rest of the city apparatus. Eventually, three mutual aid aerial devices and a mutual aid engine would operate on the scene.

Additional personnel from Allentown Fire Department were called in to man four reserve engines and a reserve tower. One reserve engine was brought to the scene while the rest covered the city. Companies would operate through the night.

At 1 a.m., a rotation began to move fresh personnel to the scene and send personnel who had been battling the fire for hours back to station. At that point two mutual aid ladder trucks were sent home and the city’s reserve tower truck was brought to the scene. As of 3 p.m. on Monday, crews were still battling hots spots in the building. A demolition crew was hired for Tuesday to start demo work on the building.