This article examines in detail the water-delivery capabilities of anchor and hold (A&H) structural protection operations in the wildland-urban Interface (WUI). Structure protection involves actual fire suppression of involved structures as well as the predeployment of firefighting units at the structures to defend against an approaching fire before it gets to the structures themselves.

There are two theories or strategies of operation for engine companies protecting structures in the WUI—bump and run (B&R) and the aforementioned A&H operations.

B&R tactics are based on the attack unit being mobile and self-sufficient. Firefighters rely on the apparatus’s own onboard water (booster tank) for its water supply. The reasoning behind this operation is to stay highly mobile and ready to quickly leaving the area if the situation becomes too dangerous.

With the real prospect of several structures burning in specific areas at the same time, the extreme radiant heat created can be more intense than the heat from burning brush and embers. This factor, along with the possibility of high-wind conditions, has the potential for creating firestorm conditions, which then require the use of high-flow streams. 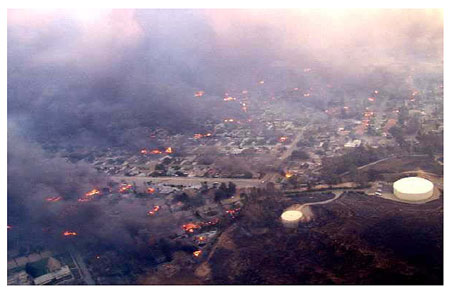 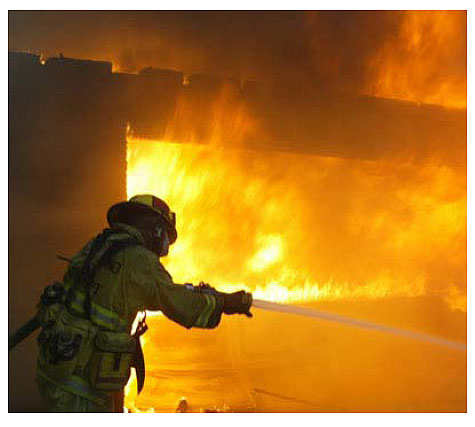 (2) This stream is no match for the flames; you have to match the gallons per minute (gpm) to the British thermal units.

Again, when using B&R tactics, units operate from onboard booster tanks, which limit the water-delivery rate capabilities. To stretch the mobile water supply, firefighters tend to produce low-flow streams that may be ineffective in knocking down the fire. The firefighters go into “preserving water mode” with good intentions but wind up wasting water, since the inferior streams may not have the muscle to knock down the fire.

The bigger the booster tank is, the longer the water supply will last; however, the reality is that many engines involved with the structure protection in the WUI are municipal or city units with 500- to 750-gallon tanks–an amount that is used up very quickly in B&R operations.

The A&H tactics covered in this text were developed using three phases of operations, keeping safety and maximum efficiency as the goals. They are the following:

The hose evolutions that will be covered are based on a five-unit strike team concept, which is the preferred grouping for WUI operations. It should be noted that the five-unit team is not always possible; however, the operations described in this text can work with more or fewer than five.

Please note that, in the theoretical operation discussed here, a single engine supports the water supply to other apparatus while placing large amounts of large-diameter hose (LDH) on the ground to provide water supply, which may not be practical in all scenarios. Such operations may be useful in limited circumstances.

The basic firefighting strategy for A&H operations is to establish a water supply and initiate an attack on the fire to achieve a quick knockdown on the involved structures to stop or slow down the threat of fire spread to exposures. The safest and most efficient way to do this is with a blitz attack operation. A blitz attack involves hitting a body of fire with an overwhelming amount of water to achieve a knockdown as quickly as possible. 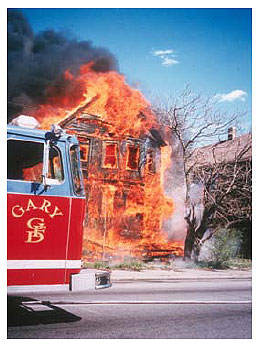 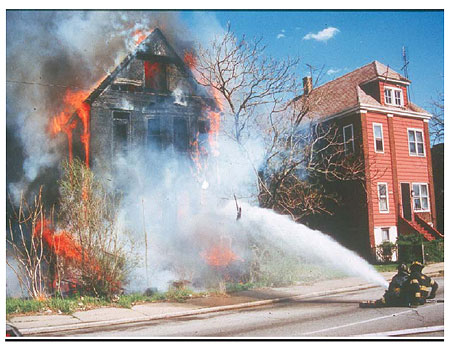 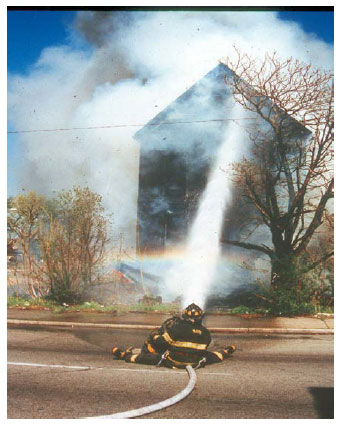 Fire hydrants represent the most commonly used water source, since they are often available on the WUI fireground. Flow capabilities from the hydrant system can range from extremely poor or out of service to moderate and high flows.

Fire scenarios can vary from one to another, thus requiring various flows ranging from handlines to master streams. The goals for these operations are 100 to 250 gpm on the 1¾-inch handlines and 300 to 500 gpm on 2½-inch handlines and master streams. If the water supply allows for higher flows, then, obviously, they can be achieved, if need be. The hose/nozzle combinations for the handlines are generally based on the inventory of the units involved. Most use 1¾-inch and 2½-inch hose. The master stream flows are kept low based on the typical structures found in an urban-interface situation: single-family homes.

Before deploying the pumping apparatus and the supporting hose evolutions, it is helpful to know how much water is available for the operation. Hydrant use requires a method for evaluating available water. Will the hydrant support multiple handlines, such as 10 or more? Can fixed master streams be used? A quick flow test can be conducted to help determine available water. Here’s how it’s done: A single engine is connected to the hydrant using a hose evolution capable of bringing in maximum flow. LDH works best. The easiest way to flow water for the test is to discharge through a 2½-inch discharge. If the engine has a built-in flow-metering system, simply discharge the water through the appropriate discharge and read the flow meter gauge. The 2½-inch discharge does not need to have a nozzle attached to it because flow, not pressure, is being read. When the engine is ready to flow water, open the discharge of choice and throttle up until the intake pressure comes down to zero or to the lowest allowed intake pressure allowed by department standard operating procedures (SOPs). 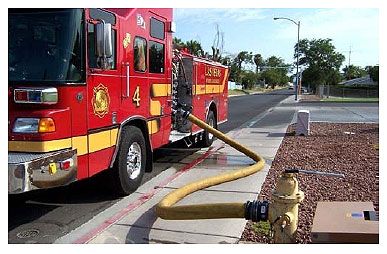 (4) Make the hookup to the hydrant with maximum flow in mind. Use LDH. 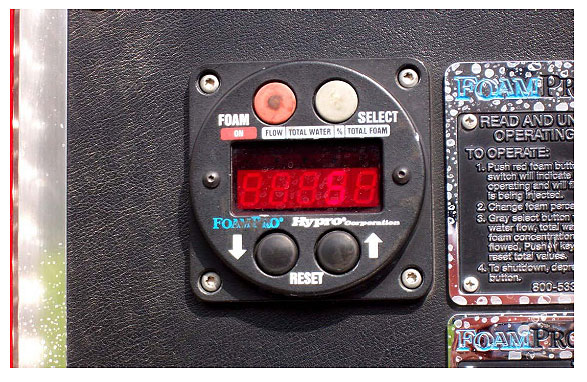 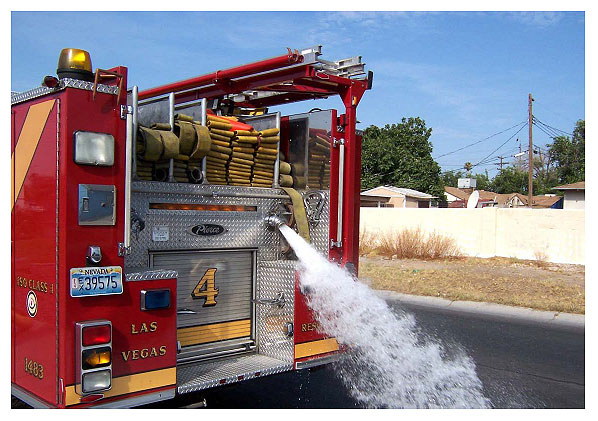 (5) If the engine has a built-in flow meter, simply open the proper discharge and read the flow from the flow meter.

An alternative method from the built-in unit flow meter test involves the use of a water flow chart. Create the chart using a portable flow meter or a handheld pitot gauge in conjunction with a two-inch smooth bore tip. The chart should note specific pump discharge pressures to reflect flows of 250, 500, 750, 1,000, 1,250, and 1,500 gpm.

Here is how the available water check using the flow chart is done: After the engine receives the water from the hydrant, the pump operator should throttle up until the intake pressure comes down to zero or to a predetermined pressure set by department SOPs. Note the pump discharge pressure on the discharge gauge and reference it to the chart to determine the flow. 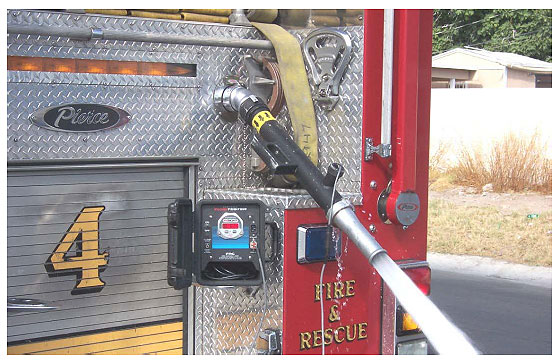 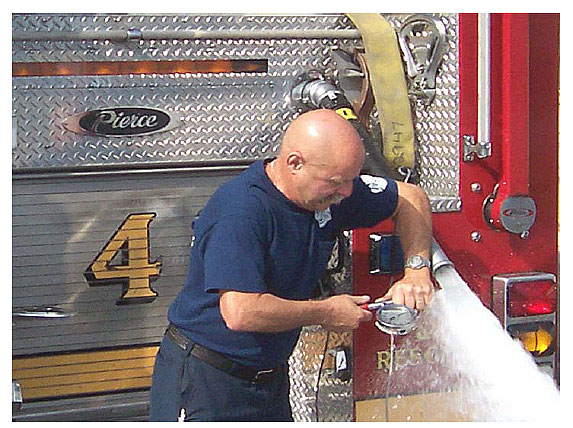 (6) If the engine does not have a built-in flow meter, use either a portable flow meter or a handheld pitot gauge in conjunction with a two-inch smooth bore tip to develop a flow chart. 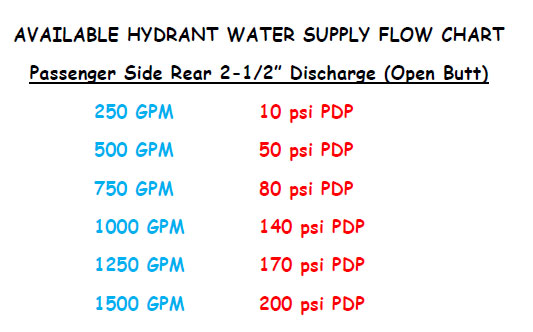 These flow tests are not designed to always show the total volume of the hydrant. Instead, they are a quick test done in the heat of the battle using one large stream to flow the water.

Another method for determining flow from a hydrant is to attach a flow meter to the hydrant. 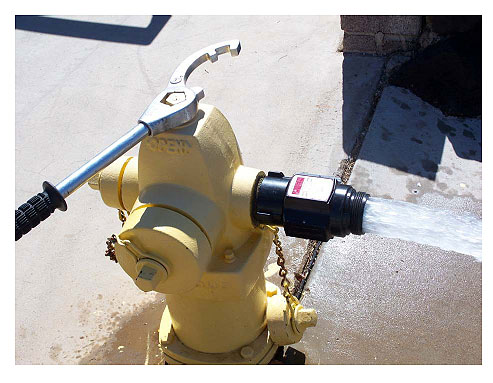 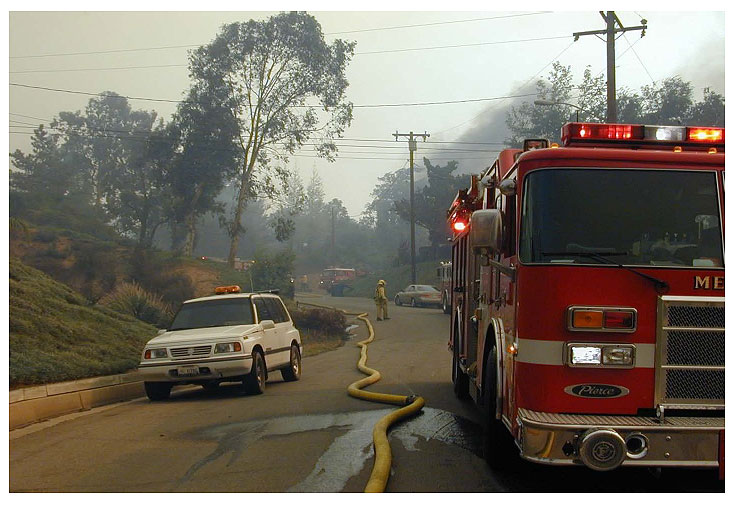 A common hose evolution used in A&H tactics involves small-diameter hose connected directly from the hydrant to support pumpers attacking the fire. This concept dramatically decreases the flow from the hydrant because of the higher friction loss in the 2½- or 3-inch supply lines as well as the low fixed-system pressure available from the hydrant. 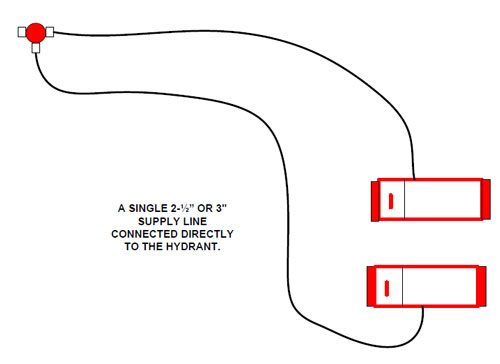 Several water delivery hose evolutions can be used to move water in an interface operation more efficiently than the aforementioned operation. This article focuses on an operation that uses 4-inch hose; it is based on Southern California fire service methods (they’re known to have major interface fires there and use predominantly 4-inch supply hose.)

This evolution uses fire hydrants for the water source and is based on a 1,500-2,000 gpm water supply and a 500 gpm discharge from each pumper. The 500 gpm is based on the needed flow for a fully involved residential structure. Obviously, the available water can be lower. If this is the case, you will need to take turns with the water supply to allow for a 500-gpm attack per pumper. 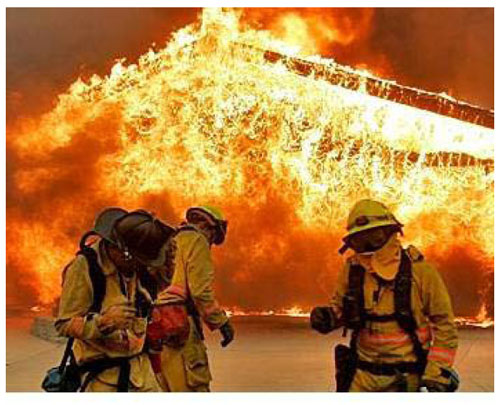 Even though the 4-inch hose has a much lower friction loss than the 2½- and 3-inch, connecting it directly to a hydrant using hydrant pressure only does not allow the system pressure to move the water through hose evolutions that have any distance at all from the hydrant itself. Therefore, the most efficient method for moving the required flow through the hose evolution is to place a pumper at the hydrant in a relay to discharge the water under higher pressures to the remaining four units. The unit at the hydrant should make its hookup with at least two 4-inch soft suctions. If the hydrant seems to be hot enough, add a third soft suction, if you can. 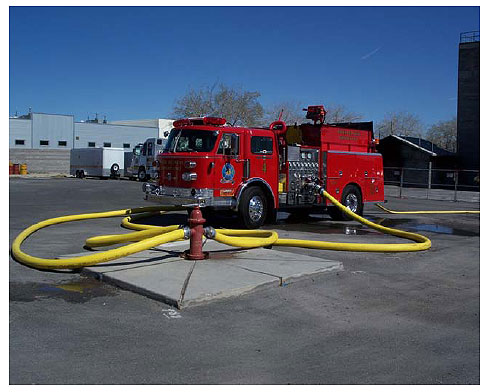 (8) The pumper at the hydrant should make use of the available water.

The pumper at the hydrant will use two 4-inch discharge lines to supply the four receiving pumpers fighting the fire with the choice of two different types of evolutions. This is based on a 1,000-gpm flow per 4-inch line with friction loss being 20 per 100 feet of hose. The pumper receiving the 4-inch line will get its 500 gpm and discharge the remaining water to the next pumper with 4-inch hose. The following diagrams illustrate the two types of relay pump operations that can be used. 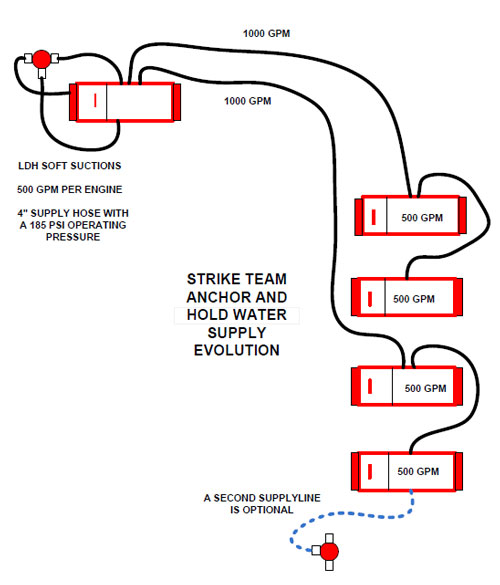 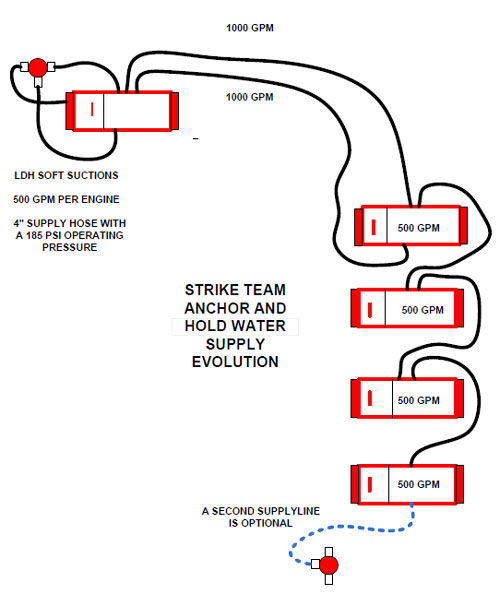 The WUI fireground is an intense area in which both fire apparatus and civilian vehicles are moving unchecked in the fire suppression area. With this problem, the likelihood of hose blocking the egress is high, thus forcing vehicles to run them over. Although 4-inch hose is small enough to allow fire apparatus to clear, civilian vehicles may have a problem. Substituting the 4-inch with either 2½- or 3-inch hose will give clearance to most civilian vehicles with a moderate amount of friction loss that can still be overcome by the pumper at the hydrant pumping the lines. The goal is to try to keep the smaller hose to a 50-foot section if possible.

The type of operations mentioned in this article requires everyone involved to be on the same page. Strike teams are usually made up of units from various agencies. These units may have different types of equipment as well as operating procedures. For this reason, a preincident briefing should be done on implementing any hose evolution, especially the A&H operations discussed in this article.

Paul Shapiro is director of Fire Flow Technology. He is a nationally recognized instructor on large-flow water delivery. He is also a retired engineer from the City of Las Vegas (NV) Fire Department. He has authored numerous articles for fire trade magazines. He has been in the fire service since 1981 and is the author of Layin’ the Big Lines and produced the first in a series of videos on large-flow water delivery. He is available to answer questions; he can be reached at (702) 293-5150 or Layinline @aol.com.