March 6, 2017, started like any other shift. I arrived at Station 24 by 0645 hours, and there was a normal pass down for shift change by 0730 hours. The engine apparatus was still red and full of water, no equipment was broken or missing, and all of my crew had reported for duty. Morning-meeting seat assignments are fairly standard, department e-mails and memos, then outside to check our trucks. Station 24 has an engine and a rescue (ambulance) with six personnel assigned. Engine Driver/Operator Chris Thomas and Firefighter Robertta Manger are two of the best in the business, and I do not have to micromanage them on a hectic scene.

Being fit to fight fire is one of the most important aspects of our job but is a foundational piece. As in other shifts, we trained and completed our physical fitness training—sometimes in gear, sometimes not. I do not recall how we performed our physical training that day, but we did complete it. We discussed dinner, ate lunch, and ran calls.

The tones dropped for an apartment structure fire in the adjacent response area. We rushed to the trucks and threw on our bunker gear, as usual. We set our radios to the correct tactical channel and responded as the second-due engine. En route, I listened for the on-scene report of the first-arriving engine; it didn’t come. The battalion chief was the first-arriving unit; he established command and set the incident priorities. Normally, the first-due engine would be fire attack; the second-due engine, water supply; and the first-due rescue, search. As we rounded the corner, I expected to see the other engine pulling up, deploying hoses, and initiating the fire attack, but I did not. The A side was all ours; we were the first-arriving engine.

The complex had multiple two-story buildings, each with four apartments and four single-car garages. As we drove just past the front of the address to allow room for the ladder truck, I noted that the garage door was about 50-percent discolored and black from heat inside the garage. No smoke was pushing from the corners of the garage door or the apartment’s eaves. The chief informed me that all occupants were out and accounted for.

I continued with fire attack operations; the rescue prepared for primary search. Manger pulled the 1¾-inch crosslay with the smooth bore nozzle, which flows 185 gallons per minute (gpm).

Two cars were in the apartment driveway; at one side of the recessed front door was the garage wall; a row of hedges was on the other side. This restricted our options in setting up for fire attack.

As my crew completed their tasks, I looked through the open front door but did not enter and scanned for smoke and fire. I saw no smoke coming from the interior door to the garage; from my vantage point, it appeared closed. Light white smoke was in the house, and I could easily see to the rear through the kitchen to the sliding glass doors; I could also see up the stairs to the second floor. I saw Manger around the corner, masked up, hose in hand, and preparing to make entry through the front door. I masked up, and as we were putting on our gloves ….

Boom! Out of the corner of my eye I saw an explosion as the inside door from the garage to the house blew off from the 2 × 4 wood studs. I turned. As I looked down, I saw fire around me down past my waist. Manger and I turned to safety by the cars, put on our gloves, went back to the hoseline, and began to extinguish the fire. I radioed that water was on the fire, I handed the hose to Manger, and we began to make entry.

I pulled the ceiling and noted that there was no fire overhead. There was a hole in the drywall leading to the garage and the doorway where there used to be a door. I realized at that point that my hands hurt a lot. I asked Manger how her hands were; she said that her hands also hurt. The fire was under control. I radioed to command that we were coming out.

The entire incident, including fire attack following the explosion, lasted only seconds. Command was obviously worried and met us and Thomas at the foot of the driveway. Thomas said that was the loudest boom he had ever heard. I didn’t hear a thing, and Manger said she didn’t either. We took off our gloves and found we had second-degree burns to the dorsal side of our hands, mostly on the thumb and index finger and along the top of our knuckles. We were lucky (photos 1-2.) 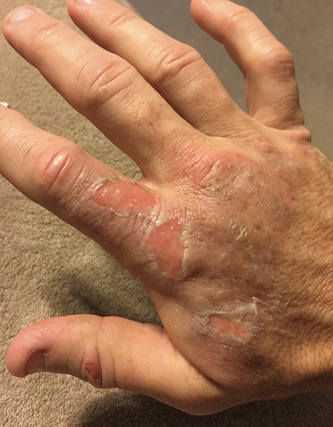 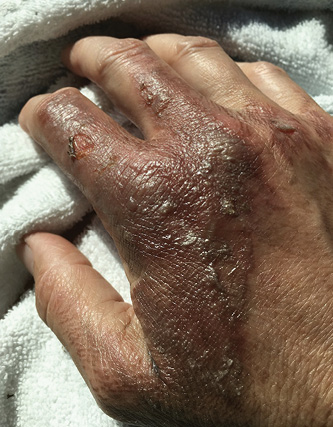 I can’t tell my story and leave out an important detail. As we were being transported to the hospital by personnel from a nearby station, the lieutenant asked if I wanted or needed pain medication. At first, I said no. Manger quickly replied, “Me neither.” As I sat on the bench in the back of the rescue, my hands were throbbing. I asked the lieutenant for some pain meds as my hands were “on fire.” Manger then said that she could use some pain meds also.

We arrived at the hospital; I exited the rescue truck. Unless I couldn’t walk, I would never be on a stretcher. In the hospital, a nurse asked me to rate my pain. I replied, “A 6.” Manger said, “Mine’s a 5.” That is one reason she is such a great firefighter: She will never be outdone.

I was out on medical leave for three weeks; Manger was out for a couple of weeks. On returning, we were both on light duty for a few weeks to allow our hands to heal so we could put on fire gloves again and work.

After a detailed investigation that included Stephen Kerber, director of the Underwriters Laboratories Firefighter Safety Research Institute, the incident was found to be a backdraft—a smoke explosion that occurs when additional air is introduced into an oxygen-depleted fire. The heated gases enter their flammable ranges and produce an explosion. In a Fire Engineering article, Christopher Flatley noted that “a backdraft is an ‘air-driven event’” and “the fact that most fires are air regulated and not fuel regulated makes the understanding of backdrafts so important.”1

In Kerber’s video analysis of this event, he advises viewers “to break it down and look at the fire triangle. Where was the heat? Where was the fuel? Where was the air? Normally, when you do that, you can really begin to make sense of what’s going on.”2

“On the A side of the structure, we had what appeared to be fire in the enclosed garage upon arrival …. Another key factor is really around the interior door to this garage. Fire starts in the garage and is contained to the garage.”2

The key factor was the garage door’s broken latch, discovered after the backdraft. In the garage, there was plenty of natural fuel, wood, and cardboard, which is significant regarding backdrafts since these fuels can maintain a smoldering fire. There were also plenty of synthetic products to allow a hot smoldering fire to continue.

“A major component here is the oxygen, as there were a few unique factors, looking at this incident specifically, that revolve around research that we’ve done in the past trying to examine what conditions does it take to create a backdraft. Normally it involves providing oxygen, taking it away, providing oxygen, taking it away, then ultimately you get those conditions right where the air and fuel are (sic) mixed properly to create that explosive event. We did have conditions here that allowed for that to occur.”2

The broken latch had a significant role in this fire. The fire in the garage essentially pushed the door closed as pressure built in the compartment and then, as it retracted and became oxygen limited, it allowed the door to open and allowed air into the compartment. The fire was breathing on its own, and this allowed for it to maintain its high temperature; the introduction of oxygen was the triggering event.2 The wind, gusting up to 20 miles per hour that afternoon, played a part in the event. With the front door open, following the flow path, the wind could have pushed the interior door to the garage open, giving the fire the oxygen it was desperately seeking. “The bad timing here is that the crew is masking up, stretching a line, and ready to stretch into the structure. As that’s occurring, this event [the backdraft] occurs.”2

Kerber noted the following key points for firefighters: Understand the fire triangle, know that a ventilation-limited fire is one the size of which is limited by the amount of available oxygen, and understand the triggering events in which introducing air in that garage was critical.2

This fire exhibited the signs of a backdraft, which I failed to recognize. I didn’t think that there would be a rush of air into the fire compartment until we were ready with the hoseline in place. I didn’t know that the latch of the interior door to the garage was broken. The wind at our backs opened that door and gave the fire the oxygen it needed to ignite the smoke explosion. It was 30 seconds from when I looked through the front door without a mask on to the time of the smoke explosion. Thank God, I had my mask on by then. We were lucky that we were not in front of the interior garage door when it exploded and was torn off the 2 × 4 studs. That’s why firefighters stay low before opening doors and, when possible, don’t get dressed right in front of the door. Since I didn’t close the front door, I didn’t control the flow path. No excuses—it is my job to keep my firefighters safe and ensure that everyone goes home. Never again, because no shift is just any other shift.

Tucker Hindman is a captain and 17-year veteran of Palm Beach County (FL) Fire Rescue, assigned to Fire House 36 on B shift. He has a bachelor of science degree in public administration in emergency planning and management.