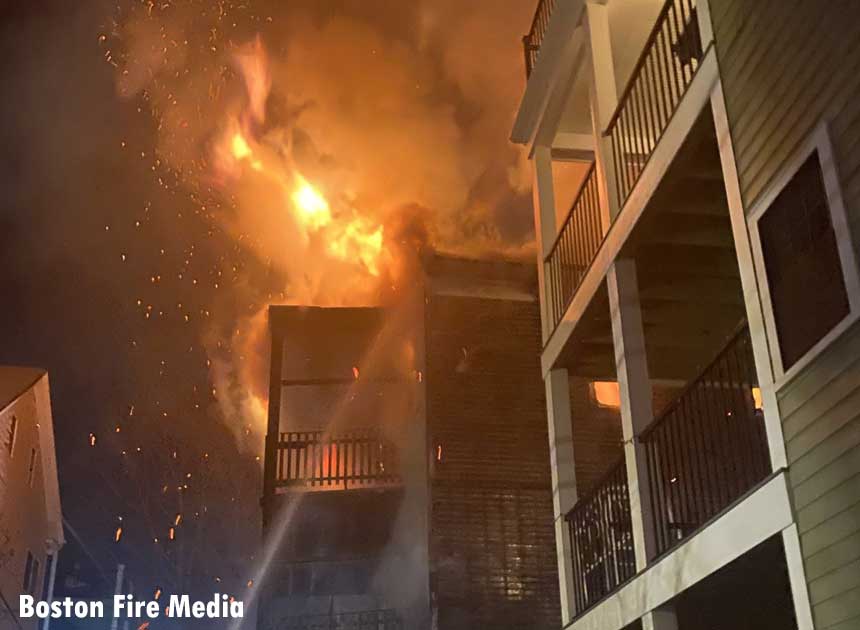 The video courtesy of ⁦@LiveBoston617⁩ of the 3 alarm fire at 77 Romsey St. pic.twitter.com/uOkqBBUeEc

Boston (MA) firefighters were kept busy last night with a pair of three-alarm fires in the Dorchester section.

Heavy fire has been knocked down from the 2 1/2 Story occupied building at 12 Stonehurst St. All companies are working , major overhauling being done at the 3rd alarm. pic.twitter.com/5Kn6YDAu9a

Yesterday evening, fire crews first responded to a fire at 2 Stonehurst St. Photos and video on the Boston Fire Department Twitter feed showed firefighters encountering heavy fire venting from the dwelling. The fire ultimately went through the roof and went to three alarms, with firefighters making use of heavy stream appliances and multiple large diameter hoses.

Damage was estimated at about $500K. Two firefighters were hospitalized, and four adults and two children were displaced.

All companies are working at the 3 alarm fire at 77 Romsey St. As the fire engulfed the building they have moved to a defensive position to try to contain the fire pic.twitter.com/tLPoaWyHg8

Later, at around 4 a.m., companies responded to a three-family residence at 77 Romsey St. Firefighters had heavy fire throughout the structure and all companies were ordered out. One occupant managed to escape, and there were no reported injuries.

From the Fire Engineering Vault: Civil Defense vs. Fire Defense