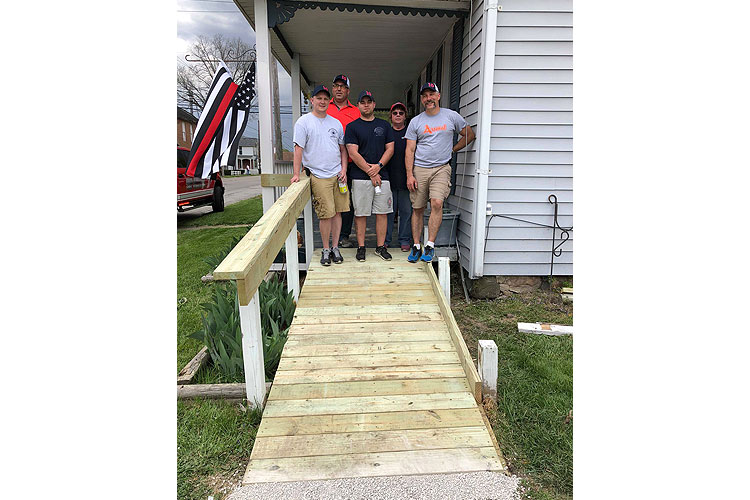 A few years ago, the members of the Adams-Markleville (IN) Fire Protection Territory (AMFT) accepted me as one of their own, like many other firefighters and departments have over the years. As a fire service junky and someone bedbound with Duchenne muscular dystrophy, the love and support I have from brother and sister firefighters is truly overwhelming.

AMFT Chief Jim Chaplin told me that if I ever needed anything not to hesitate to contact him. I was also told that, should I need something and he found out that I didn’t contact him, he would come and kick my butt, personally. With this warning in mind, I hesitantly contacted Chief Chaplain about the ramp at my home that was in disrepair. Without hesitation, he began to coordinate efforts with his department to get the project completed.

On the afternoon of Sunday, May 6, 2018, Chief Chaplin and AMFT members Chris Parish, Dustin Best, Jerry Stigall, and Linda Gustin rebuilt the ramp. This ramp is used when I am required to leave via ambulance for medical appointments. It was becoming difficult and potentially dangerous for the ambulance crews to use it because of a few loose and rotting boards. Instead of just replacing the affected boards, they went above and beyond and rebuilt the entire ramp.

There are not enough words in my lexicon to adequately express my thanks and appreciation for what my brothers and sisters at AMFT have done for me. While to them it might have been a small gesture and not a big deal, it is a big deal to me. They took time away from their families on a beautiful Sunday afternoon to make sure my needs were taken care of.

This is just another example of why I am drawn to firefighters and why they are my heroes. I am so very proud to be an honorary firefighter. Chief Bobby Halton doesn’t like when I use the word honorary because he thinks of me as a real firefighter. I, on the other hand, like the honorary title because I am truly honored to be a firefighter and apart of this, the world’s greatest, profession.

Jason Wheatley is an Honorary Firefighter in Middletown, Indiana.