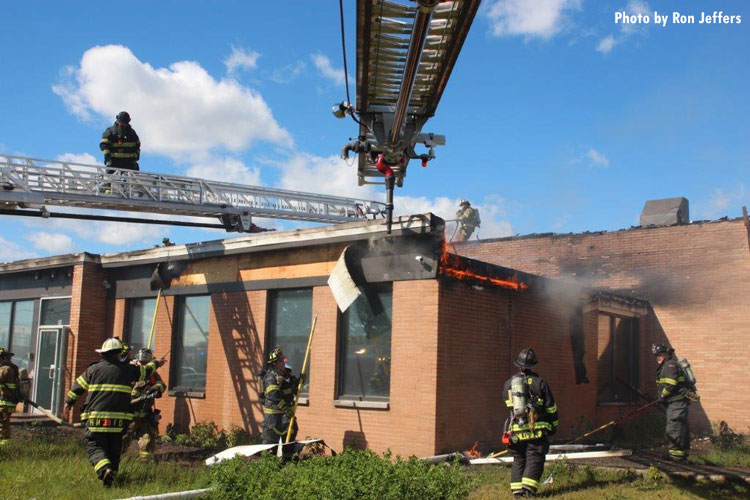 On a clear but very windy May 15 afternoon, a small plane from Philadelphia bound for Teterboro Airport crashed in Carlstadt, New Jersey, setting buildings and parked vehicles on fire on Kero Road. The crash occurred just a quarter of a mile from where the plane was suppose to land on the runway. The pilot and co-pilot of the Learjet were killed, but no one on the ground was injured.

Sources said the plane was leaning to one side, went belly up, and crashed into the parking lot of the Carlstadt D.P.W. Garage.  A explosion occurred, sending up a huge column of smoke that was visible as far away as New York City. Two commercial building caught fire in the roof areas on either side of the D.P.W. facility, which is set back off of the street. In addition, numerous vehicles were set ablaze.

First-in fire companies found it difficult to approach the fire: low-banking smoke covering the street, which was crowded with commercial vehicles and construction crews doing work in the area, including working on a new sidewalk opposite the D.P.W. facility. Fire Chief Steve Capuano struck three-alarms for mutual aid units to report to the scene and go to work.

It was reported that the D.P.W. workers had already left for the day. The commercial buildings involved in fire were safely evacuated and all persons were accounted for.

Firefighters used handlines and master streams and quickly knocked down the fire in buildings and parked vehicles.

The fire scene became a crime scene as police roped off the area, waiting for numerous agencies to begin their investigation.

A Culture of Acceptance: Up Close with the Rosecrance Florian Program