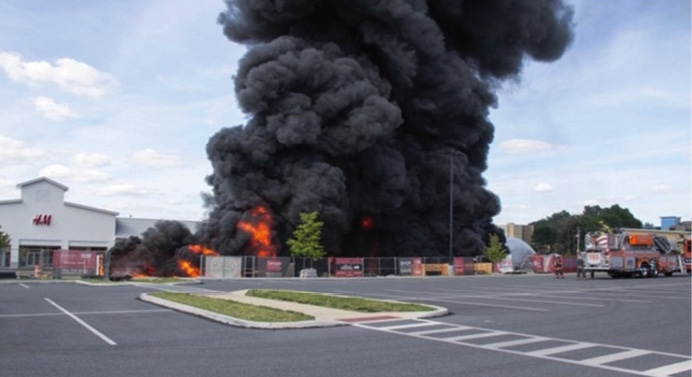 On July 1, 2019, the Lafayette (PA) Volunteer Fire Company (LVFC) was dispatched for a reported vehicle fire at a local shopping center. Although this was not an uncommon occurrence for the heavily patronized complex, the extreme smoke column that was seen two miles from the fire station and more than 20 miles away from bordering counties indicated otherwise. When the fire department duty officer (FDDO) advised the communications center of his response, the dispatcher reported a construction vehicle in a pit was on fire along with the material being used to fill a hole.

The incident location was in a parking lot undergoing a sinkhole remediation project that, after excavating the cavern, measured nearly 80 feet wide × 600 feet long × 15 feet deep (photo 1). The original sinkhole appeared without warning on August 10, 2018, consuming several vehicles, including one that was occupied; the occupant was successfully rescued. The sinkhole was in a newer section of the open-plan shopping complex that had recently added four buildings totaling more than 145,000 square feet. After the sinkhole evolved, an extensive investigation—which included geological research—ensued to determine its cause. Ultimately, the collapse was attributed to a failure of the underground drainage system. As a result, a new and comprehensive system was engineered; it has since been reconstructed. It was nearly completed when a fire of undetermined cause started.

The initial vehicle fire nature code response was two engines (from the host company) dispatched at 1619 hours. Multiple 911 reports were received simultaneously, including one reporting that the adjacent building was on fire; this prompted a subsequent dispatch of a commercial building fire nature code contingent of four engines, three truck companies, and one rescue unit at 1624 hours. 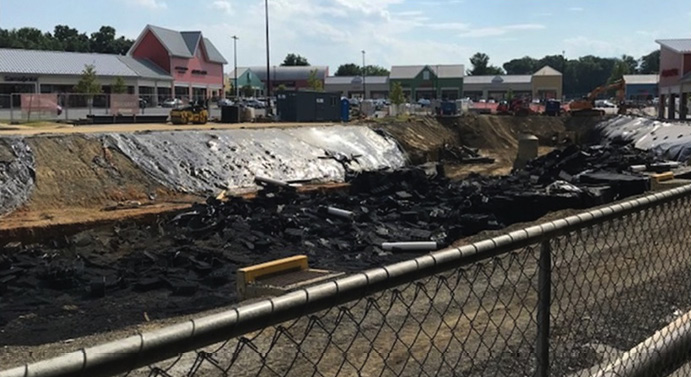 (1) Postfire view of excavated drainage system area including the fire area in the foreground and subsequent equipment access. (Photo by author.)

The FDDO arrived to find a large open pit with a rapidly advancing fire (photo 2) consuming a complex arrangement of more than 5,000 interconnected polypropylene drainage units (photo 3) covered by a heavy rubber membrane. The drainage system was several hundred feet long × 40 feet wide × nine feet high. The fire profile could be likened to a flammable liquid (but with solid material) pit fire where conductive spreading outside of the “ring” is unlikely. A caveat to this situation, however, was that less than 30 feet away was a multiunit strip of seven stores facing significant radiant heat. 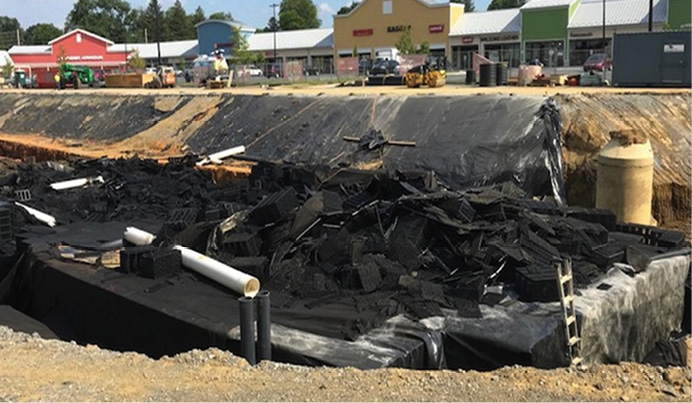 (3) A postfire view of the remaining drainage system components. (Photo by author.)

The shopping complex is in a tourist area renowned for the local Amish community. The main multilane roadway, referred to locally as “The Strip,” is a three-mile stretch of U.S. Route 30 (Lincoln Highway). The Strip is adorned by dozens of hotels, restaurants, and shopping and entertainment establishments including the nearby Dutch Wonderland Amusement Park.

The complex has two bottleneck access points—one that leads to the original older section and another that is constructed easterly to access the new section. This incident occurred at the height of the summer tourist season in conjunction with the upcoming Fourth of July celebration and related retail sales incentives. The area was full of shoppers and tourists as well as transients passing through the start of Monday’s rush hour. Traffic along the main roadway was grid-locked, as usual. The exodus of patrons from the parking lot coupled with “rubberneckers” created response obstacles. The response time of the first-arriving engine, however, was three minutes from the time of response to arrival.

Concurrent to the fire department response, the local police department and shopping complex staff worked to evacuate the exposed buildings and parking lot. On arrival of the fire department, accountability of construction personnel was confirmed. The FDDO assumed command and directed the first-arriving engine to lay in a supply line from a public water system hydrant located near the new section entrance. The engine immediately initiated exposure control by deploying an apparatus-mounted deck gun and a 2½-inch handline to train water streams between the fire and the exposure strip of stores. The inferno pit was immediately in front of and parallel to the store strip.

Two truck companies set up to direct water streams to protect the lengthy storefronts. Other varied diameter handlines were deployed along the perimeter of the pit to extinguish the burning solid hydrocarbon structure assembly.

At 1630 hours, the incident commander (IC) requested three additional engine companies for staffing because of the extreme environmental heat stressors. Because of the reports of smoke coming from the roof, a fourth truck company was requested at 1640 hours to assist the roof group in assessing radiant heat impact to the stores and porch-like overhang. Water flow from three master stream devices and other varied diameter handlines had taxed the water system, prompting the IC to request three mobile water tankers for support at 1650 hours.

After the FTF’s arrival, foam lines were assembled, and an on-site track hoe was positioned to break apart the remaining drainage system to allow for effective foam application (photo 4). At 1832 hours, the incident was placed under control and, shortly thereafter, most fire units were demobilized. 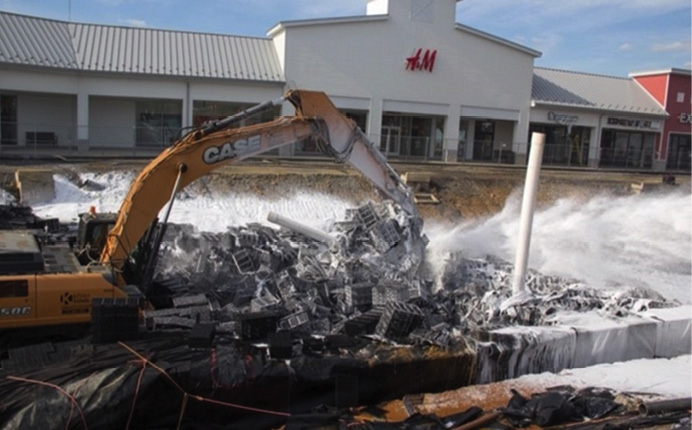 This impressive fire resulted in an estimated $2 million loss to the drainage system components. Additionally, several stores sustained minor damage including superficial sign melting, cracking of display windows, and minor smoke damage to the interior (photo 5). All the affected stores reopened less than three days later. The fire department estimated that $3.5 million in structure and contents were saved; this can be attributed to the immediate exposure protection tactics coupled with the noncombustible structural features including cement-infused fiber finish on the storefronts. 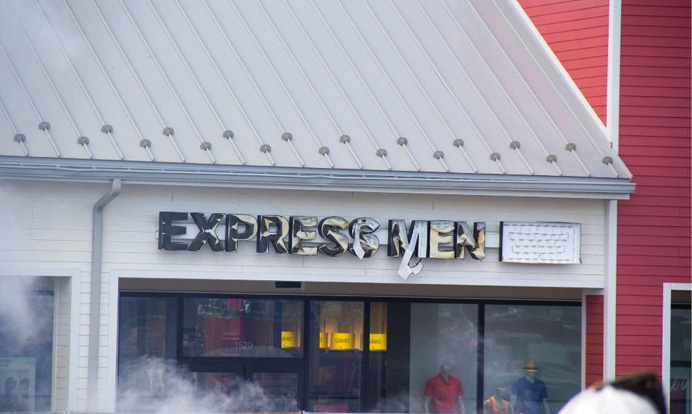 One aspect of the response that was considered nearly 45 minutes into the incident was the adverse effects from runoff. The pit was part of an active stormwater management system from the newer section of the parking lot that led to a stormwater basin outlet to the rear of the property. There was a concern that physical products of combustion might collect in the basin. Considering the fire runoff and recent and future rain runoff, the contaminants could matriculate into a larger off-site issue as they passed through a nearby waterpark venue at Duke’s Lagoon (at the nearby Dutch Wonderland Amusement Park) and, ultimately, into the Mill Creek.

A hazardous materials team was called to assist with runoff control at the outfall conduit leading from the parking lot (fire pit) drainage system to the adjacent basin. Hazmat crews placed booms to collect runoff by products (photo 6). 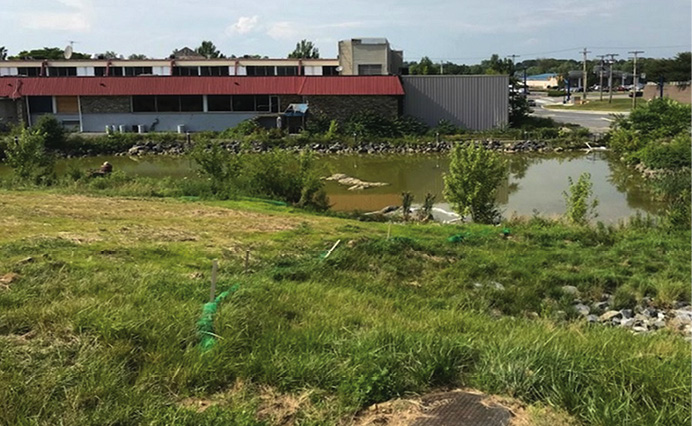 (6) Booming materials were deployed in the stormwater basin to the rear of the complex. (Photo by author.)

Another concern was the potential contamination from the application of 150 gallons of alcohol resistant aqueous film-forming foam and the potential for the recently discovered emerging perfluorooctane sulfonate and perfluorooctanoic acid contamination. The day after the hazmat team’s attempted runoff control, shopping center management employed mediums to completely block the fire pit drainage conduits to prevent potential future contamination. However, for every action, there is an equal and opposite reaction: Blocking the basins would then allow future rain to accumulate in the open pit, creating more effluent that would need be to exhumed, as well as delay remediation of the site to allow for replacing the damaged drainage system. The Pennsylvania Department of Environmental Protection has jurisdiction over these types of situations and is now working with shopping center management to have the effluent tested and managed.

Although many articles often highlight the “what went wrong” elements of an incident, it is beneficial to reinforce the “what went right” aspects, too. This unique incident exhibited many examples of pre- and post-dispatch response preparedness and discipline that limited the adverse effects.

Situational awareness. The FDDO did not get absorbed into the routine “vehicle fire” mindset. The only thing routine about the fire service is the dispatch. The FDDO maintained perspective of the incident’s footprint that set a calming example for other incoming units. Despite the distant, large, fuliginous smoke column, the FDDO did not get “tunnel vision” or arbitrarily request unnecessary or extraordinary resources. The size-up and subsequent strategies and tactics (i.e., exposure control) exemplified the incident priorities of life safety, incident stabilization, and property conservation. The immediate prioritized strategy to protect exposures was consummate of not allowing the fire to expand past its footprint (incident stabilization) and prevented extraordinary structure and content losses (property conservation).

Interagency and facility management preincident coordination. The fire department, local law enforcement, and shopping center management maintain a consistent rapport and practice all-hazard incident preparedness coordination for many incident types including structure fires, gas leaks, and other domestic situations. Preincident coordination enables stakeholders to understand their roles, responsibilities, capabilities, and action expectations. As was realized for this incident, the rapid evacuation of the stores and controlled removal of patron vehicles from the parking lot by local law enforcement and facility personnel prior to the fire department’s arrival alleviated and addressed immediate life safety issues and eliminated added exposures and obstacles (i.e., parked vehicles). This provided the fire department an area to effectively initiate incident stabilizing strategies and tactics.

Training. In addition to the cooperative relationship with local law enforcement and facility management, the fire department and mutual-aid companies consistently train on water supply. The multiple master steams and numerous larger diameter hoselines employed, coupled with a comprehensive understanding of the local public and private water supply infrastructure, enabled crews to provide protection and extinguishing mediums with little to no interruption.

There is a fire service saying that every fire will go out whether the fire department intervenes or not. Nonintervention is not a popular posture that fire departments like to take. In this instance, the fuel-limiting fire would likely have burned itself out but not, however, without consequence. This incident’s outcome would not have been as benign had exposure protection not been implemented immediately. The combination of situational awareness, command presence, incident priority strategies and tactics, and interagency training and coordination contributed to a relatively inconsequential event (the financial loss to the drainage system and minimal business interruption notwithstanding).

This incident proved that anything can happen. Preplanning for such a scenario is likely not contemplated in any jurisdiction. However, the preparedness and response attributes employed during this incident played an important role in all-hazard events and unusual circumstance instances like this one.

ERIC G. BACHMAN, CFPS, AEM, is a 37-year fire service veteran and the former chief of the Eden Volunteer Fire/Rescue Department in Lancaster County, Pennsylvania. He is also the hazardous materials administrator for the County of Lancaster Emergency Management Agency and is the manager of the Local Emergency Planning Committee of Lancaster County. Bachman is registered with the National Board on Fire Service Professional Qualifications as a fire officer IV, fire instructor III, hazardous materials technician, and hazardous materials incident commander. He has an associate degree in fire science and earned emergency management certification through the IAEM and the state of Pennsylvania. Bachman is also assistant chief of the West Hempfield (PA) Fire & Rescue Company.