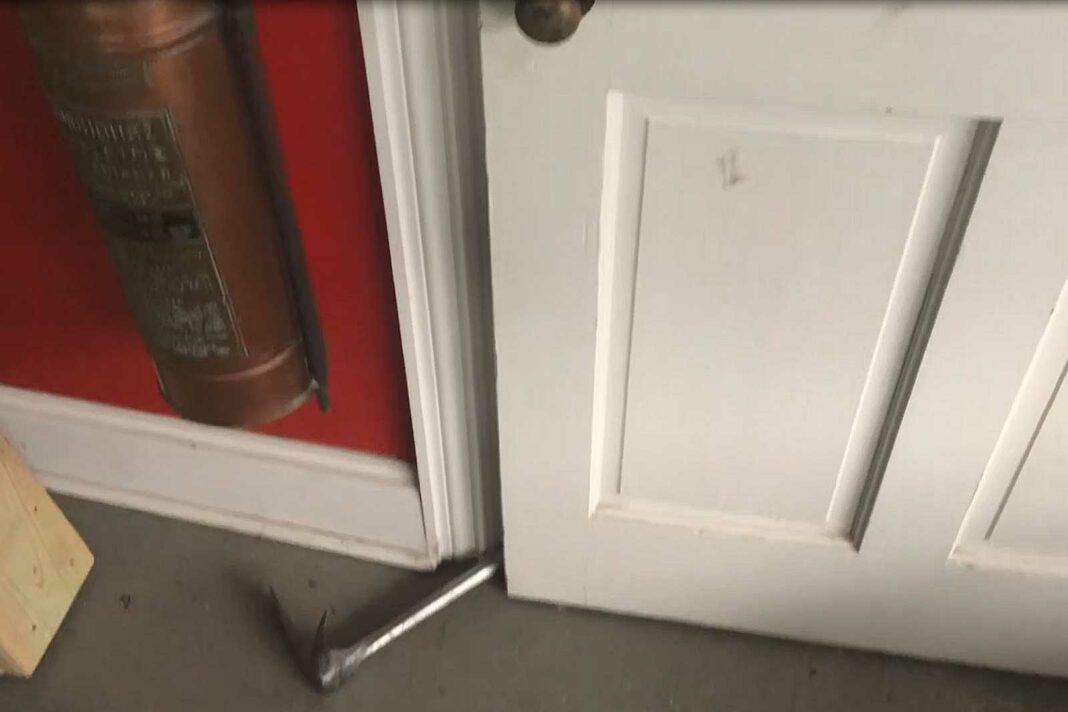 So many things are written about forcing entry through a door from the initial tactic of “try before you pry” to forcing the door using through-the-lock methods and conventional forcible entry tips and tricks. We as firefighters always want to be known for being “good with the irons or the nozzle.” Being competent at what you do depends a lot on getting back to the basics and reinforcing the basics during an incident. It’s easy to miss something in a size-up because of the complexity of the conditions in which we operate, so it’s imperative that we perform like a well-oiled machine.

During your size-up of the door, you should be reading not only the locks and any irregularities (protective shields over the locks to prevent using the K-tool, angle irons blocking access to the area between the frame and leading edge of the door, drop-bar carriage bolt heads) but also what’s coming out from the door’s seams. Is the smoke pushing heavily and curling under pressure, is it lazy and slowly puffing, or is it just a haze that smells like a burnt pot of food on the stove? If you’re not sure but you have that “taste” of something burning, flex the door at the top (farther away from the lock, where it flexes easily), and read the smoke conditions. If, during the “try before you pry” tactic, you didn’t feel the door with the back of your hand, you might want to do that now before you pop it open and quickly encounter heat and blackout conditions.

If, during your size-up, you notice that the smoke looks violent or there may be something happening to the paint, it’s okay to hit the top of the door with a “quick blast” from the pressurized water can. If that turns to steam immediately, the fire can be close to where you’re operating. Lazy or drifting smoke, on the other hand, may mean the fire is farther away from your vantage point or the fire room door is closed.

After you force the door open, don’t be in such a rush to pull it closed! During training, it’s becoming more evident that firefighters are so worried about controlling the door that they fly inside with the halligan tool to grab the door with the adz and rapidly pull it closed. What if you slip or the tool slips out and the door relocks? Now you have to force it again. When you “control” the door, slowly be prepared for what you may encounter behind it. Get low and, if need be, use the door as a shield to protect yourself from any flames that may be exiting in your direction.

Your main concern during controlling the door should be, once you’ve “let it blow” for a few seconds, can you see beneath the thermal layer? The first firefighter there should lie flat on the ground, shine a flashlight in, try to look under the thermal layer, get the layout of the room or hallway, and see if there are obstructions in your path. After that, you can use the thermal imaging camera (TIC) to scan the area for any victims or signs of the fire and then raise the TIC directly above your head to try and read the heat waves above to get a direction to move toward the fire. Pulling the door closed rapidly and entering into blinding smoke without a view will have you moving in with total uncertainty of what you’re going to face or which direction you’re going to go.

Hopefully, during your initial search training, someone told you that the first firefighter who enters the building should sweep behind the door. You’re looking for a victim, a stairwell, a hallway, or even a room that is being blocked when the door opens. Many times, it may be a good idea to give a quick radio transmission to the units operating on the scene that there are stairs behind the door or a hallway. Doing so will ensure a timelier search of the floor above or the areas behind the door. In large multiple dwellings with lobby apartments, you’ll often encounter this. Many times, the entrance door will sit directly in the center of the apartment, almost cutting the apartment in half. When the door opens, it usually cuts off access to the hallway that leads to the bedrooms, where life can be most prevalent.

It also makes it very difficult for the engine to advance the hoseline around the door. The door might have to be popped off its hinges to allow a fluid movement of the advancing line.

If you have to perform this tactic, don’t haphazardly toss the door out of the way. Leave it in the vicinity so if you have to back out of the apartment, you can still control the fire from entering the lobby area.

With today’s prevalence of lightweight construction, it’s important to redefine some operational tactics. For years, you’ve learned that the first firefighter through the door with a hook in a commercial occupancy should make an inspection hole in the ceiling to ensure the fire wasn’t already in the cockloft above or to get a read on the construction features above. Since we also anticipate much earlier collapses of floors with trusses and laminated I-beams, maybe it’s time to start sizing up what’s below us earlier.

If you enter a private dwelling or commercial occupancy, you can attempt to drive the pike of the halligan through the floor to read the conditions below. You can use the TIC or put your hand over the hole to get a feeling about the conditions below; this might tell you earlier that the fire is below. If the tool bounces off, you’ll know there’s a tile or concrete floor supported by the exposed joists, adding weight and the possibility of an earlier collapse.

Have plenty of self-control at your next door.