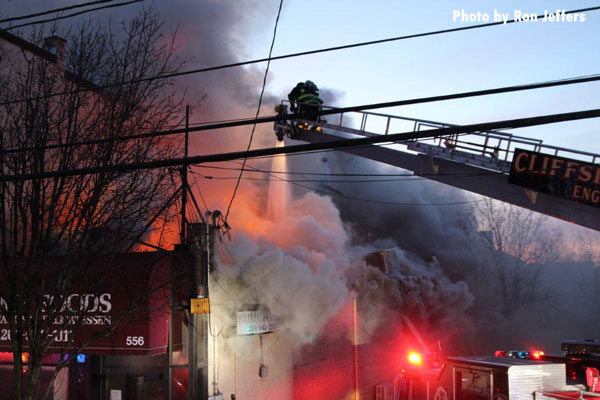 Cliffside Park (NJ) volunteer firefighters were dispatched at 5:35 a.m., February 27, for a report of smoke alarms and a smoke condition for a hardware store on Anderson Avenue. Upon arrival, members found smoke coming from the rear of a delicatessen, which was the southern exposure to the store, a large three-story ordinary mixed occupancy structure adjacent to the food store.

Chief Teddy F. Tarabokija ordered an “in borough” second alarm for additional Cliffside Park Fire Department members to turn out. Firefighters began forcible entry in a side door on the D side, located along sloping driveway, to gain entrance to the rear kitchen area, where the fire started. The building was of irregular construction with a one-story frontal on Anderson Avenue and a lower floor storage area as the driveway sloped down. Firefighters entered with a handline and soon radioed to the incident commander that they had the visible fire knocked down. The fire, however, was already extending up walls and above an old fashion tin ceiling.

The fire quickly consumed the cockloft and conditions began to deteriorate. Members were ordered off the roof and an evacuation of the structure was ordered.  Exterior hand lines and streams from Engine 3’s squirt apparatus and Ladder 1’s ladder pipe were used.  Operations were hampered by overhead power lines. In addition, the 27° temperature caused icing conditions.

A large air conditioning unit was located in the front end of the delicatessen, and members operating at the front display window area were cautioned of the unit that began to sag into the roof. Eventually, fire consumed the roof and threatened the upper floor windows on the Exposure B hardware store where apartments were located. A hoseline, via ground ladder, was used to keep flames in check alongside the window area. Eight residents above the hardware store were evacuated.

The rood caved in, creating pockets of fire difficult to extinguish. After a long battle, the fire was placed under control. Local investigators and members of the Bergen County Crime Scene Unit went through the remains of the destroyed structure. When their investigation was completed, a demolition crew was called in to take the building down.

One firefighter suffered a hand injury and was transported to Holy Name Hospital in Teaneck for treatment. The Teaneck Box 54 Club was on hand during the fire and set up a rehab area opposite the fire, on Anderson Avenue, as the sun rose over the municipality.