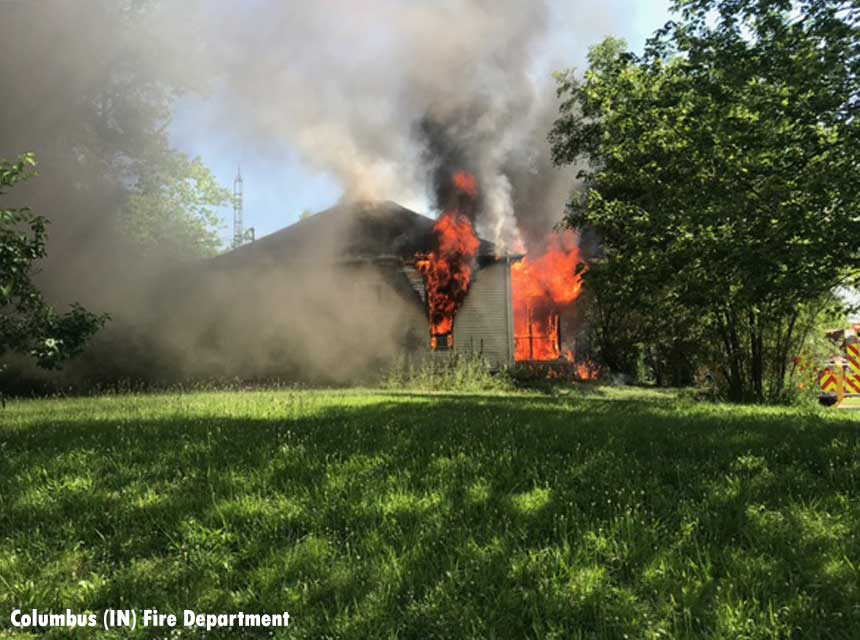 Columbus (IN) firefighters rescued a female trapped in a mechanical lift device after fire broke out in her home on Thursday afternoon. The female occupant was located in a bedroom at the rear of the home. When firefighters arrived on the scene, they found the front of the home fully involved in fire. Two adult males, who escaped prior to the arrival of firefighters, told the rescuers that the woman was unable to walk and was trapped in the back bedroom.

At approximately 4:42 p.m., Columbus firefighters we called to 201 S. Hinman S, located in East Columbus, after a 911 reporting a fire in a front bedroom of the single-story home. When the first-arriving engine arrived on the scene, they reported heavy fire shooting the front of the home and advised incoming fire units that the on scene crew was preparing to make entry for fire attack. As the crew prepared to enter, the company officer completed a 360° survey of the home an learned that a woman was trapped in a rear bedroom. With additional units arriving on the scene at this time, a report was given that firefighters were making entry into the rear of the home to enact a rescue.

Facing extreme heat and heavy smoke conditions, firefighters made entry to the rear of the residence and located a conscious adult female who was still secured into a mechanical lift device and unable to self-rescue from the home. Firefighters worked feverously in nearly blacked-out smoke conditions to free to the woman from the lift device and pull her from the rear of the home out of an exterior door to an awaiting ambulance crew. The woman, who showed signs of smoke inhalation, was rushed to the hospital for care. The woman’s condition is unknown at this time.

Firefighters worked to extinguish the blaze, which was under control approximately 15 minutes after the arrival of firefighters to the scene. The cause of the fire is under investigation at this time. Damages from fire were extensive to the front of the residence with smoke damage seen throughout. Two pet cats perished in the fire.

The Salvation Army provided rehab hydration to firefighters on the scene and will be working with the fire victims for an emergency shelter needs in the coming days.

Columbus Fire Chief Andy Lay commended the work of firefighters. “The training and skill came together this afternoon and because of the aggressive focus on life safety, our crews were able to get this community member out of this home and to medical care.”

Last week, the Columbus Fire Department hosted a fireground command training program for area and regional firefighters.  One portion of the training focused specifically on victim rescue at a residential fire.

Mike Wilson is a captain with the City of Columbus (IN) Fire Department.