If you are a member of a small department, rural or urban, this article and the lessons are written specifically for you. The fire being discussed can happen in your jurisdiction or response area and is probably happening daily throughout the United States. It is what you do as a commander and leader that makes the difference and sets the stage for a successful outcome.

So many times, we set the bar of success on the fireground on safety and saving the building. Yes, those are extremely important, but what about command and control? We certainly can all relate to large fires and emergencies where no injuries were reported but the overall operation was a mess.

The following review is of a large fire occurring not just once but twice over a 16-hour period in what could best be described as the largest building in this small Ohio township’s jurisdiction. Before you say “rekindle,” you will find as you read on that this was not the case.

The Carlisle Township Fire Department (CTFD) consists of five full-time members and 15 part-time members led by Chief Steve Higgins. The department covers 24 square miles with a population of 7,500 residents and responds to approximately 800 runs per year. It does not run EMS squads but does respond as a first responder with a private ambulance company handling transports.

If you were a bowler in Lorain County, Ohio, you certainly knew the name “Stoney’s,” as this was once the place to hold your league night or host a party for your child. Everyone knew the location, and it was always used as a map marker when giving directions; it was a 30-lane bowling alley that had been vacant for approximately six years. The original 12-lane bowling alley was built in 1949, with an additional 18 lanes added a few years later. Within the past five years, the property was purchased by a local manufacturing facility and had been used for storage until about a year ago.

The building involved was a hybrid of different construction: The front part was wood frame with a two-story residential area on the A/B corner; the A/D side was a large, open area; and the rear bowling alley area was covered by a metal bowstring truss roof. All utilities had been shut off to the structure when the business closed.

(1) An overview of the complex. The first fire originated and was contained to the B side bump-out office area and the second-floor vacant apartment. The second fire, which was much more advanced and challenging, appeared to have originated closer to the A side front. (Photo courtesy of Google Earth.) 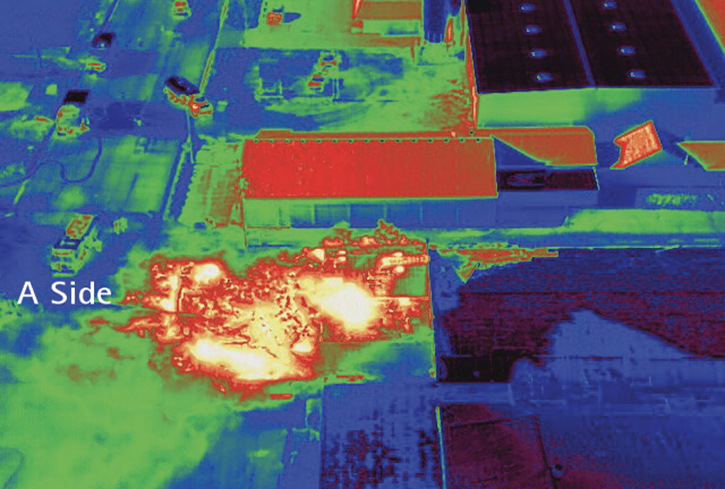 The first fire occurred in the afternoon on Saturday, July 25, 2020, at 1802 hours. The CTFD received a call for a reported structure fire at 613 Oberlin Elyria Road at 1806 hours. The first-due engine on scene reported a working fire B side Division 1 with extension to Division 2.

The Division 1 office area and hallway on the B side was heavily involved with extension to the Division 2 apartment above the office area. A 2½-inch attack line was stretched to the B side for initial knockdown. A door was forced, and a crew attempted to gain access to the Division 2 apartment, but the stairway was compromised. The crew was able to gain access to Division 2 through a window to check for extension. Members found smoke and heat but no fire. They ventilated and overhauled the area. A board-up company was contacted, and crews remained on scene until the company’s arrival at 2205 hours. Command was terminated, and the board-up company secured the structure.

The fire was contained to the Division 1 office area and hallway. The Division 2 apartment suffered heat and smoke damage.

At 0822 hours on Sunday, July 26, a call was received for a reported structure fire at 613 Oberlin Elyria Road. The first-due engine could see heavy smoke when leaving the station. A second alarm was requested. This notified the Elyria (OH) Fire Department, which dispatched Tower 8, the on-duty shift commander in Chief 3 (me), and a tower from the Amherst (OH) Fire Department. A water shuttle (tankers) box first and second alarm were also requested to supply tower ladders because of very limited water supply in the area.

At 0827 hours, CTFD Engine 7 arrived on scene with flames through the roof on the A/B corner. The fire location was noted as a different location than the fire the night before. A water supply established at a hydrant and a deck gun were used for initial knockdown.

My Arrival, Lessons, and Use of Technology

As I responded with the requested truck company, the word “rekindle” entered my thoughts, but the fire was in a totally separated location, and that seemed noticeable on arrival. I conferred with Higgins, who assigned me to the A side, where Elyria’s tower was being placed into service. Crews from multiple Lorain County departments worked together for nearly seven hours to fight the fire. Crews conducted searches, and once “all clears” were given, defensive operations commenced again. 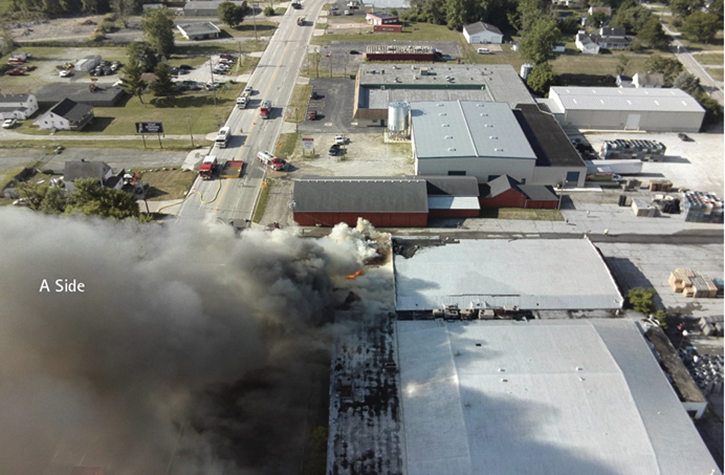 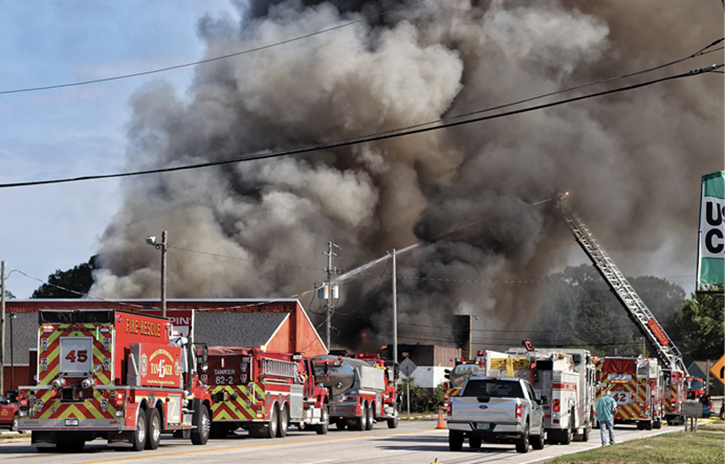 (3, 4) Sunday’s fire (July 26) was a much more advanced fire and began in a different area from Saturday’s fire. (Photos 3-7 by Terry Costigan.) 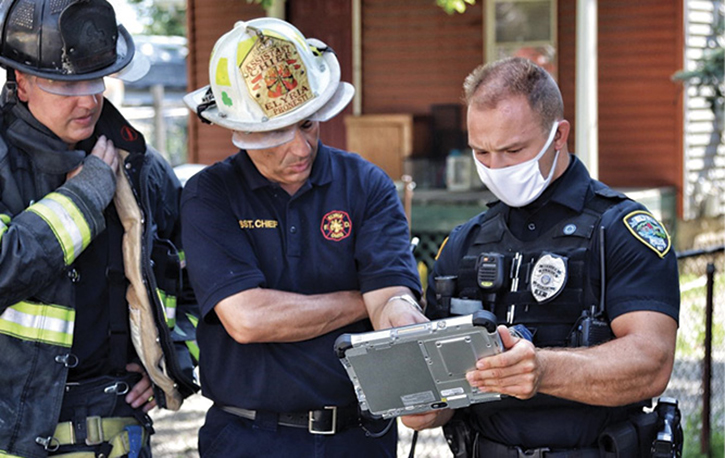 (5) I reviewed drone information and relayed conditions to command.

You may be thinking, “Well, just another vacant fire; so what?” I would like to share the valuable lessons from a small department commander and encourage you to think and plan for the use of technology at your next large event.

First, Higgins and the CTFD had this building, which could very well classify as the largest in their response area, on their radar and had a plan in place. The first fire on Saturday was confined to a relatively small area and was contained rather quickly. Crews were hampered battling a fire in July with heat and humidity, but nothing else of major consequence was noted.

The Expanding World of Unmanned Aerial Vehicles in the Fire Service

What Does NFPA’s Drone Standard Mean for Your Fire Department?

The larger second fire on Sunday required many strategies and tactics that many departments the size of Carlisle may never or rarely put into place. The important ones are listed below.

“Slicing up the pie”—the division of the fireground. Even though it is 2021, I still hear about and have even commanded “Lone Ranger” firegrounds, where a single commander is trying to coordinate everything in front of him. Many use the excuse “I don’t have anyone” or “I don’t know that chief from another town.” Do not let your ego impair your responsibility on the fireground. Get together with neighboring departments, train together, and simply talk to one another.

Higgins established chief officers around the building to coordinate and keep members safe. He also established a chief in the role of water supply officer to organize the tanker shuttle and drafting sites. 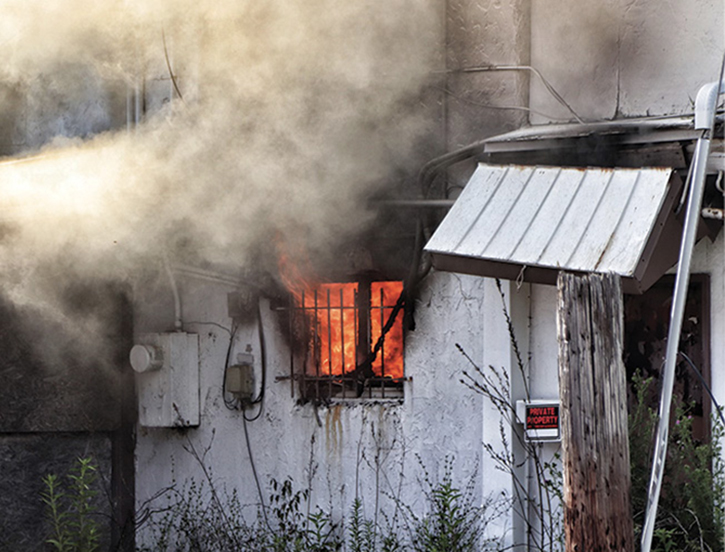 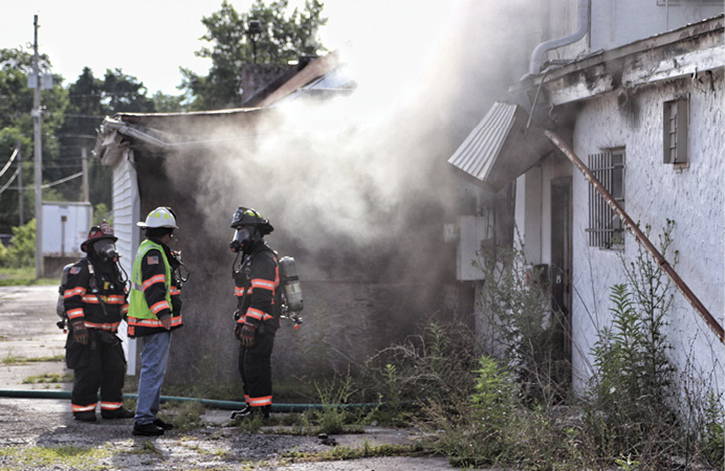 (6, 7) Saturday’s fire (July 25) was small and contained to the B side office area with some extension to the second-floor apartment above.

I had responded to fires in Carlisle Township before but never in the role as a command-level officer. Higgins and I had never worked together before, but we both knew what had to get done, and he trusted all the mutual-aid chiefs who were assigned roles. His example of humility and trust is one not always found at large incident scenes in small towns. I commend him for his command presence and organization of the largest fire to date in the township’s history.

Drone use. I am old enough to remember the time before thermal imaging cameras. When they did come on the market, their cost and value were met with typical fire service pessimism. This pessimism carried forward to the use of unmanned drones on fire scenes. However, this fire event in Carlisle should be a catalyst to the fire service to research and embrace the use of drones, especially those with thermal imaging capability.

In 2018, the Elyria Police Department began a drone program with the purchase of two high-quality military grade drones. Obviously, their use was for law enforcement, but conversations with my friends at the department enlightened me to drone application for firefighting and rescue.

Doubters said the drones would get caught in convection currents or would replace real-life members in key tactical positions. Hopefully, in my town, those negative thoughts were put to rest on July 26.

Shortly after setting up our aerial on the A side, I was concerned about (1) our ability to try and limit the forward progression of the fire and (2) the building construction (it was unclear as to the type of bowstring—timber truss or steel).

I asked Higgins for permission to call my police department and request the drone to get an overhead look at the fire and see how much fire travel we had. As stated previously, this building had several additions erected during its history.

The drone arrived quickly, since the Elyria Police Department has a large cadre of operators spread across its patrol division. Someone is always on duty who can fly and obtain information gleamed from the flight.

The drone gave us a good indication of fire spread; allowed us to see that, while we were pessimistic in their existence and reliability, fire wall separations were holding the fire; and gave us an extra layer of safety when we placed crews in the building to recon, search, and check for extension.

Rapid intervention and large areas. When crews were sent interior at the A side entrance under my division command area, I set up a rapid intervention team (RIT) from neighboring Elyria Township. A three- or four-person crew is by no means enough for a RIT in a large building. I had four members going into the structure and had only four members exterior. Staffing and on-scene resources were an issue in the early stages, and we had to pull members away from water supply activities to get a RIT in service. I failed to make sure that air supplies and RIT packs were compatible. The time to find this out isn’t when the fire is happening!

I also failed to make sure the crew had adequate lighting. We did stretch a separate RIT line, and while this crew did not have to go in service, the takeaways will stay with me for the next large event with mutual aid performing RIT functions. Always train with your mutual aid. It is easier said than done, especially in my area, but that does not mean it cannot be done.

I hope this article stimulates you to do more “what if” scenarios for larger buildings and target hazards in your jurisdiction. See what is available to you through technology, and begin discussions with your administration on the purchase and use of drones with thermal imaging technology. Kudos to Higgins and his department on a job well done; may his leadership, advance planning, and humility to call for command help be an example to all.

JOE PRONESTI is a 32-year veteran of the Elyria (OH) Fire Department, where he is a shift commander. He is a graduate of the Ohio Fire Chiefs’ Executive Officer program. He is a contributor to fire service publications and Web sites, including Fire Engineering, FireEngineering.com, and FirefigherNation.com.