Recently, the question “What is the best way to search a large floor with multiple rooms in zero or near-zero visibility?” came up. As luck would have it, the Oklahoma City (OK) Fire Department (OKCFD) obtained a 12-story building to train in before the demolition crews moved in. Our department’s command staff decided to use this building to address several situations that had arisen in past responses and training scenarios. Our access to this large building gave our department the environment in which to test, refine, and teach various skill sets involving an environment that is difficult to create on a drill field, such as search of a large floor with a common hallway and multiple rooms, some of which are subdivided into even more spaces.

In Oklahoma City, we have a staffed heavy rescue unit that responds to large incidents, often to provide support to search and rescue operations for civilians and to provide rapid intervention team (RIT) coverage for firefighters. This company is well-versed in search operations. It was only natural, therefore, that members would look to this company for answers to questions such as the following:

We tested several ideas at real speed in smoky conditions. We learned that the way the department typically searches houses and other buildings did not meet the criteria in the questions. We tried different ideas we picked up from some notable online training sites, and we still weren’t successful to the level that we felt was necessary.

Our work and discussions led us to develop the technique described below, which is a combination of some popular search techniques we found to work very well. This article presents the technique in use at a residential high-rise design, but this is not the only way to employ it.

For this technique, “high-rise” is a general term for a building that firefighters cannot reach from outside ladders and hose streams; crews must make access to an interior access point to fight fire or engage in rescue operations. In your area, a high-rise may be a multifloor skyscraper or a two- or three-story hotel, school, church, or dormitory. Many of these buildings have a common hallway that is the main pathway from which multiple rooms are accessed. For this article, picture a 12-story residential building that has two vertical fire-safe stairwells and 16 to 20 apartments-ranging from studio, one-bedroom, and two-bedroom floor plans-intermixed on each floor. The fire is on the eighth floor.

The initial crews have reported a working fire on the eighth floor and are initiating a fire attack handline. While crews are setting up the line, another unit is assigned to search the floor above the fire. This area is known to be one of the most dangerous in the building for occupants and the firefighters assigned to work in the area. Construction and fire conditions can impact the environment of the floor above, especially the main hallway from which the crew will access the rooms. The crew should expect the main hallway and the rooms directly above the fire area to have the worst conditions; rooms remote from the fire area could possibly be more tenable and have better conditions.

Our department identifies the stairwells in a high-rise as the fire attack stairwell and the evacuation stairwell on the initial size-up for a working fire. If the crew has several floors to ascend before reaching the floor assigned to search, the crew should avoid the evacuation stairwell because a large number of people may be trying to descend these stairs. The reality of the fireground is that people will try to exit using both stairwells and make it difficult to designate the stairways specifically for exit and for fire attack. 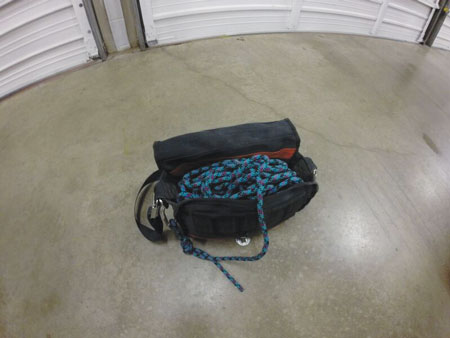 The crew should enter the floor above the fire from the evacuation stairwell using a 200-foot, eight-millimeter (mm) search rope secured in the stairwell in such a way as not to impede the flow of people coming down the stairs. Eight-mm prusik rope works well because you can fit a large amount of it in a small bag, it doesn’t absorb water like cotton, it is thick enough to be felt with a gloved hand, and it is more heat resistant than nylon (photos 1 and 2).

The crew uses four positions and enters the door in this order: 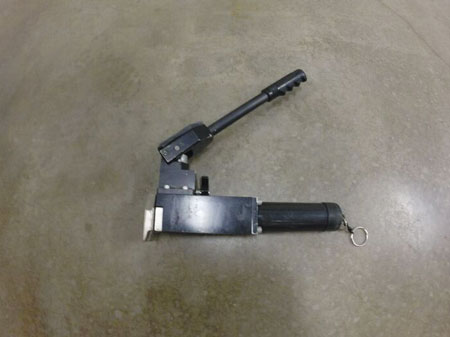 Secure the rope, and get the crew on the rope prior to entry. The rope is attached to the lower part of the staircase handrail, the back side of a door, or a standpipe. The crew is instructed to attach the rope so that it does not interfere with occupants who are coming down the stairs. Since the rope is eight or nine millimeters, it does not interfere with the door’s closing-or, if it does, the door is barely open. As soon as the door opens, the crew moves quickly to the area either farthest down the hallway or directly above the fire, depending on conditions. This allows searchers to start in the area of the victims who are in the greatest danger.

The crew members, led by the NAV position, allow the rope to deploy as they move forward to the intended access point.

As the crew enters the hallway, the officer places on the floor inside the door a large flashlight that is pointing down the hallway. The officer is positioned last on the rope and with the TIC. This allows the officer to maintain crew integrity, observe hall conditions, and see the layout of the hall as the crew proceeds to the first search location (photo 4). 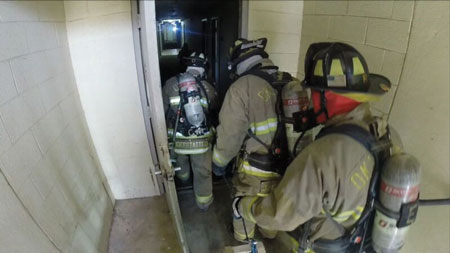 When the crew members arrive at the room/apartment they intend to search first, they should force the door and search the intended area. The NAV position stays in the hall, remaining oriented to the exit by holding the rope tight and controlling the door of the apartment being searched. Controlling the door of the apartment will help protect the conditions in the apartment and can help limit fire spread. While the crew is searching, the NAV can force either the opposite or the immediately adjacent door with the HFT if the door is close enough to reach without leaving the immediate area of the apartment being searched. Remember, the NAV position must control the next door also after forcing to protect the conditions in this room since the rest of the crew will search it next (photo 5). 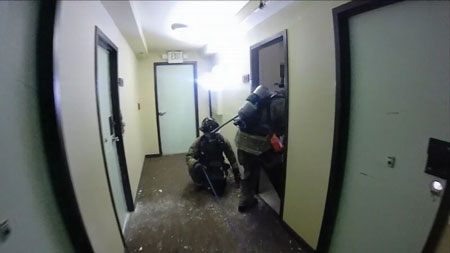 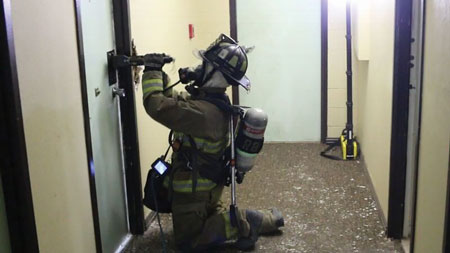 The NAV should be positioned in the hall so that he blocks the route that leads deeper into the building, and he should be holding the rope tight. This way, he can direct crew members toward the next apartment to be searched or the exit. It is very easy for the searchers to become disoriented.

The technique of searching toward the exit serves multiple purposes. Hopefully, conditions continue to improve as the crew moves away from the fire area and back toward the evacuation stairwell. As the crew searches and consumes their air supply, they get closer to a safer location. This prevents crews from searching so deeply into a building that they do not have the air supply to exit after the low-air alerts on their self-contained breathing apparatus (SCBAs) have activated (photo 7). 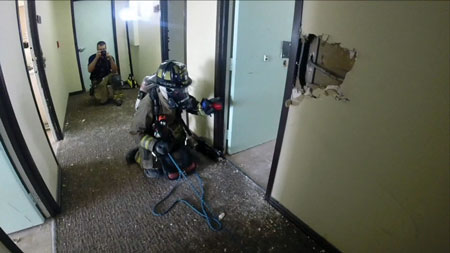 As the crew exits each apartment, it is vital that they maintain crew integrity and not “get too far ahead of the group.” For this reason, the first searcher, as he exits the room, states his last name and says “out” to the NAV position; searcher 2 and then the officer follow the same procedure. The NAV position hears all three names and “exit” and tells the officer that they are PAR (personnel accountability report). The officer should confirm accountability, make sure the door is closed to the apartment that was just searched, and direct the crew to proceed. This procedure helps to maintain maximum accountability and allows the officer to direct the crew as a group from one search area to another (photo 8). 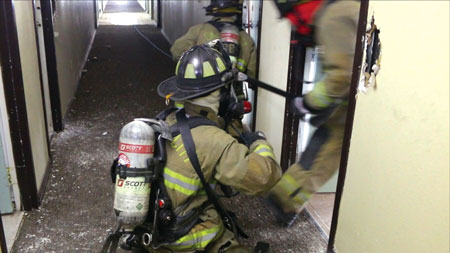 The crew continues to search the floor toward the exit using the line and keeping the NAV position in the rear of the group to maintain a tight rope when moving (photo 9). 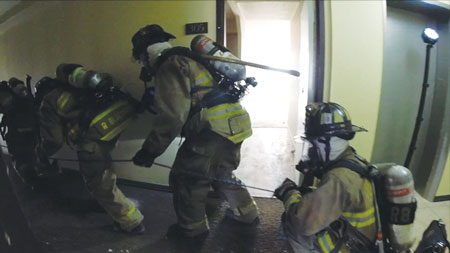 Crews should expect to have to force multiple doors in a residential structure. Many of these doors have automatic closing devices and are solid core doors with metal jambs. They can be forced with a traditional set of irons, but with the number of doors that the crew will need to force and the efficiency needed to clear an entire floor before becoming too low on air, the search crew will find it more efficient to use the HFT. The two searchers still have a set of irons between them; they can use irons to force the first door in a cluster of doors or if the HFT were to malfunction. The use of the HFT allows the NAV position to force and control other doors in a cluster of doors while the crew searches more efficiently without the need for a second person to strike a tool.

Crews should work fast and move efficiently in poor visibility conditions. In our department, every staffed engine and ladder has a TIC assigned. If your department has a second TIC available from a noninterior crew of a high-rise fire, like the lobby control or stairwell support team, equip the NAV position with this TIC. This will be very beneficial for maintaining crew integrity and monitoring conditions of the floor and as a backup TIC for the officer in charge of the search crew.

Finally, on completion of the search or depletion of the crew’s air supply, the crew exits to the evacuation stairwell and reports its findings to Command.

After testing this technique multiple times and after running more than 900 firefighters through this search evolution, we share these extra key points:

The efficacy of any new tactical recommendations relies heavily on rigorous practice and diligent preplanning. The technique discussed here works well for us and is adaptable to many situations and varying response conditions. Hopefully, it will benefit your department and perhaps become another tool in your response toolbox.